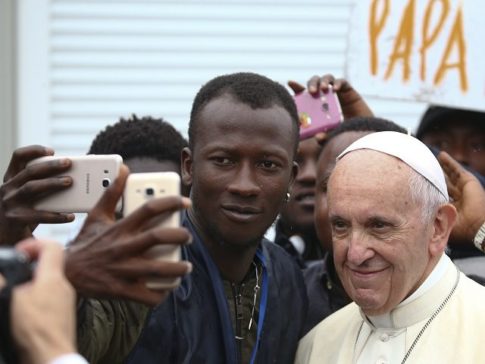 – Pope Francis Tells Migrants: ‘You Are Warriors of Hope’:

Pope Francis flew to Bologna, Italy, Sunday and met with a large group of migrants and refugees, calling them “warriors of hope” while insisting that nations open broader avenues for immigration.

During a full day in Bologna, Francis spent an hour meeting hundreds of migrants personally while posing with them for selfies under light drizzle. Later, the pontiff hosted a luncheon for asylum-seekers and prisoners in the St. Petronius basilica. He even donned a yellow plastic ID bracelet used by asylum-seekers to express his solidarity with them.

“Do you know what you are? You are ‘warriors of hope’!” Francis exclaimed during his address to the many migrants present, urging them not to give in to disappointment or despair.

In his address, the Pope also offered his explanation of why he believes some people in Europe oppose mass migration, building on earlier statements in which he suggested that xenophobia was fueling people’s concerns.

“Many do not know you and they are afraid,” he said. “This makes them feel entitled to judge harshly and coldly while thinking they see well. But this is not true. We see well only with the proximity that comes from mercy. Without this, the other remains a stranger, even an enemy, and cannot become my neighbor.”

The Pope suggested that immigration is an issue that can only be understood by meeting the people involved, rather than considering its causes and effects from afar.

“From a distance, we can say and think anything, as easily happens when terrible phrases and insults are written across the internet,” he said. “If we look upon our neighbor without mercy, we are unaware of his suffering, his problems.”

“Today all I see is a great desire for friendship and help,” the Pope continued. “I would like to thank the institutions and all the volunteers for the attention and commitment in taking care of those who are here.”

As he has done on other occasions, Francis recalled the words of the Gospel where Jesus Christ identified with the “least” among us.

“In you I see Jesus Christ, as with any stranger who knocks at our door, who identifies himself with the foreigner, of every age and condition, accepted or rejected,” he said.

Regarding concrete applications of his words, the Pope said it is “necessary for more countries to adopt private and community-based welcoming programs and to open humanitarian avenues for refugees in the most difficult situations, to avoid unbearable waiting periods and lost time.”

Last week, Pope Francis launched a two-year campaign to educate people about the plight of migrants and to provoke a “shift in thinking” toward them worldwide.

The campaign is being spearheaded by the global Catholic charities network Caritas Internationalis and aims at promoting awareness and action on behalf of migrants and refugees, assisting them in building connections with local communities.

In an address in the Vatican Saturday, Pope Francis seemed to ascribe people’s concerns with Europe’s migrant crisis to xenophobia, suggesting that a “culture of encounter” could remedy opposition to migration.

The Pope told members of the Association of National Italian Municipalities (ANCI) that he understands “the distress of many of your citizens in the face of the massive arrival of migrants and refugees.”

This distress, he continued, “finds its explanation in an innate fear of the ‘foreigner,’ a fear exacerbated by the wounds caused by the economic crisis, the unpreparedness of the local communities, and the inadequacy of many measures taken in an emergency atmosphere.”

“This discomfort can be overcome by offering meeting spaces and mutual knowledge,” the pope said Saturday. “Initiatives that promote a culture of encounter, mutual exchange of artistic and cultural riches and the knowledge of newcomers’ places and communities of origin are all welcome.”