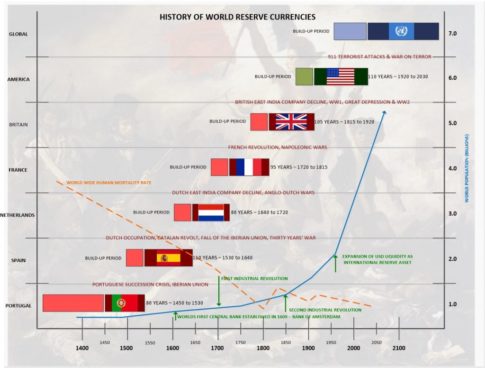 The oil-rich country of Venezuela has stopped accepting the U.S. Dollar as payment for oil.

Last week President Maduro warned that the country would this week ‘free’ itself from the US dollar.

“Venezuela is going to implement a new system of international payments and will create a basket of currencies to free us from the dollar,”

Yesterday Venezuela temporarily suspended the sale of U.S. dollars through its Dicom auction system. This (and other moves) was in response to U.S. sanctions put in place by the Trump administration.

Trump claims the sanctions are there to punish the country’s autocratic leaders. Maduro claims Washington’s move was part of an “economic war”.

This morning The Wall Street Journal reports that the Venezuela is already telling oil traders not to accept the US currency.

Oil traders who export Venezuelan crude or import oil products into the country have begun converting their invoices to euros.

The decision to suspend dollar trading on Diacom and to no longer accept the the U.S. currency for oil is potentially a major blow for the world’s reserve currency.

Venezuela’s decision comes at a time when other countries (namely Russia and China) are already finding ways to avoid using the U.S. dollar.

History shows us that currency domination does not last forever. Are we seeing the cracks in the latest global currency reserve system? Will those who seek to come out of the shadows and force of the US begin to build up their own systems to survive outside of the U.S. dollar and how important will gold be?

How important is oil to Venezuela

According to OPEC oil accounts for 95% of Venezuela’s exports. The country has ten times more oil reserves than the US, and nearly 70 billion more barrels than Saudi Arabia.

However, because of its heavy reliance on oil as an export this means it is heavily reliant on the price. Since President Maduro came to power the oil price has crashed. Inflation is out of control and the bolivar is practically worthless: $1,000 of local currency bought in 2013 would today be worth $1.20. 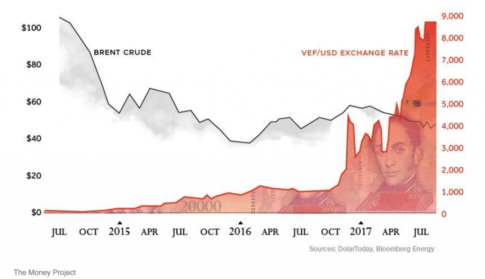 The Trump administration has made it clear that it will achieve a regime change through the destruction of what is an already severely  debilitated Venezuelan economy. Prior to the latest round of sanctions one could see a way out for Venezuela but not anymore.

It is clear that Venezuela will have to seek outside help in order to survive. That help will no doubt come from the other countries that are fed-up of or suffering as a result of U.S. dollar hegemony.

China is set to launch a crude oil futures contract priced in yuan and convertible into gold. This will give the likes of Russia and Iran a means of bypassing both the U.S. Dollar and sanctions. Now, it may also be an option for the world’s largest oil producer.

By making this convertible into gold it means countries are no longer held hostage by foreign currencies. Gold is a borderless currency which speaks everyone’s language.

Liberate us from the U.S. dollar

The new policy on oil payments has not been officially announced but it comes less than a week after both President Maduro and Vice President Tareck El Aissami called for liberation from the US dollar.

El Aissami (blacklisted by the US)  has called for other sovereign currencies to be used. On Friday he said, “To fight against the economic blockade there will be a basket of currencies to liberate us from the dollar.”

In an hour-long address to a new legislative body last week, President Maduro said, “If they pursue us with the dollar, we’ll use the Russian ruble, the yuan, yen, the Indian rupee, the euro,”

As mentioned in the introduction super-powers such as China and Russia are keen for countries such as Venezuela to join them in avoiding the U.S. dollar.

Plans have gone beyond just negotiating around U.S. sanctions and are now in full infrastructure building mode. Russia, China and Iran are all setting up a new financial system that will, in Putin’s words, focus on a “fair multipolar world”, and “against protectionism and new barriers in global trade.”

“Russia shares the BRICS countries’ concerns over the unfairness of the global financial and economic architecture, which does not give due regard to the growing weight of the emerging economies. We are ready to work together with our partners to promote international financial regulation reforms and to overcome the excessive domination of the limited number of reserve currencies.”

Oil rich nations are certainly weary of the U.S dollar’s excessive dominance over trade. Currently they have little choice over which currency to use.

One theory put forward in William R. Clark’s book Petrodollar Warfare is that the U.S. led wars ‘are fueled by the direct effect on the U.S. dollar that can result if oil-exporting countries opt to sell oil in alternative currencies. For example, in 2000, Iraq announced it would no longer use U.S. dollars to sell oil on the global market. It adopted the euro, instead.’

Even if countries are not oil-rich or fearful of the gun-wielding powers of the U.S.  they would still like the option to decide which currencies they trade in. Trading in the U.S. dollar can make life very difficult elsewhere.

When using the U.S. dollar foreign banks are required to clear payments through the US, even if they are doing business elsewhere. This can’t just happen,  a dollar clearing licence from US authorities is required. This can also be quickly taken away if Washington decides it wants to punish you somehow.

Will the euro want them? Gold will

In the short-term, the solution for Venezuela might not be as simple as accepting the euro.

Much of the current plan assumes that Europe will not sanction Venezuela. Should they also take a similar stance to the US then Maduro’s nation will be left with a choice of Rubles, Yuan and, of course, gold.

This is where Russia, China and Iran will certainly be on board. We know that all three countries hold huge amounts of gold and are very open to using it for trade purposes.

China, Russia and Iran are coordinating a new international monetary order that does not involve U.S. dollars. It has several parts, which together spell dollar doom. The first part is that China will buy oil from Russia and Iran in exchange for yuan.

The yuan is not a major reserve currency, so it’s not an especially attractive asset for Russia or Iran to hold. China solves that problem by offering to convert yuan into gold on a spot basis on the Shanghai Gold Exchange.

This marks the beginning of the end of the petrodollar system that Henry Kissinger worked out with Saudi Arabia in 1974, after Nixon abandoned gold.

This is not some back-of-a-beer-mat plan. At last week’s BRICs summit members expressed full support to China moving away from the U.S. Dollar.

This is particularly pertinent at a time when U.S. Treasury Secretary is threatening to cut China out of the U.S. Dollar system

If China doesn’t follow these sanctions, we will put additional sanctions on them and prevent them from accessing the U.S. and international dollar system. And that’s quite meaningful.

But how meaningful is it when the Asian super-power is putting infrastructures (and deals) in place to trade in gold. Don’t forget, this is the world’s biggest buyer of gold. They will unlikely need the U.S. dollar forever.

How will this unfold?

Who knows how this will unfold. But what is clear is that the U.S. has been relatively short-sighted with how it has used the power of its currency.

As it has sought to sanction, threaten and bully countries into the using its currency, others have been slowly building up their gold reserves and infrastructure systems. This means that the U.S. dollar sanctions will soon not mean as much as they once did.

It is relatively easy to put controls on a country’s currency, but it is very difficult to do so with gold.

Whilst Venezuela is no doubt struggling with the impact of the sanctions from Washington they do have support from those elsewhere and that support is very interested in physical gold.

“The cabal, might just have been pre-empted by Vlad this time.”

Personally, I am still convinced that also Putin belongs to the cabal and is just playing his role very well.