– Bitcoin Crashes 35% In China: Beijing To Shut All Local Exchanges By End Of September:

Update: Confirming the other speculation, that China would halt all cryptocurrency exchange, Yicai reports that it is not just BTC China:

To which the response from the Bitcoin Association of Hong Kong is: “if China restricts growth in bitcoin” it will drive business to us”

Yuan-denominated Bitcoin has crashed as much as 25% 35% in Chinese trading, plunging from 25,000 yuan to as a low of 16,000 on local exchanges BTCChina (and as low as 20,000 on OKCoin), following confirmation of last week’s Caixin report that Beijing would stop cryptocurrency exchange trading. China’s second largest exchange, BTC China, said that it would halt all trading on the platform beginning September 30, launching a liquidation panic.

In a statement released on Weibo, BTC China said that it would immediately stops accepting new account registrations on BTCChina Exchange. The decision was made after “carefully considering” Chinese regulatory bodies’ Sept. 4 announcement on preventing risks associated with token fundraising. A google-translated version of the statement:

China will stop all trading business on September 30th

Dear Bitcoal Chinese users: According to the September 4 issue of the “People’s Bank of China Central Office of the Ministry of Industry and Information Technology Ministry of Industry and Commerce, China Banking Regulatory Commission, China Securities Regulatory Commission on the prevention and treatment of the risk of the issuance of the currency,” the spirit of the document, adhering to the protection of investment risks, the maximum protection of users

The principle of interest, Bit Coin Chinese team by careful discussion, is to make the following decision:

Beitou China’s pool (pool) and other business will not be affected, continue to normal operation.

We apologize for the inconvenience. If you have any questions, please contact support@btcchina.com.

1/ After carefully considering the announcement published by Chinese regulators on 09/04, BTCChina Exchange will stop all trading on 09/30.

2/ BTCC products, including BTCC Pool, are not affected by this change. Please contact us at support@btcc.com if you have any questions. https://t.co/r3HvINU20p

The immediate result was a sharp plunge in the CNY-denominated price of bitcoin on exchanges like BTC China and OKCoin: 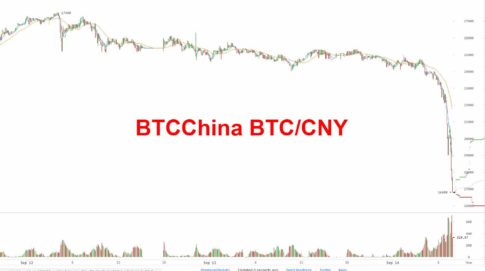 While China no longer dominates cryptocurrency trading – it accounted for nearly 90% of all trading in late 2016 before Beijing launched a series of measures to limit participaton – and is now responsible for less than 40% of global volumes, the Chinese selloff has spooked global markets, pushing bitcoin sharply lower on international exchanges as well like Coinbase, where it was trading at approximately $3,600 last.

A breakdown of global bitcoin exchanges by volume is shown below: 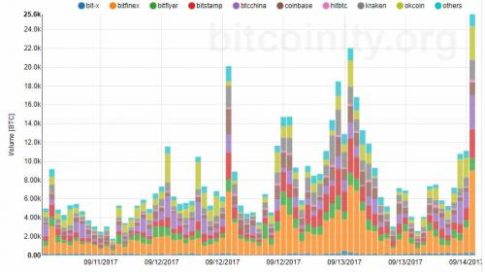 Also notable: as of this moment, China-denominated bitcoin is trading at about 17,000 yuan or just under US$2,500, indicating there is a nearly 30% arb between Chinese and offshore trading.

This isn’t the first time the bitcoin market in China has come under regulatory scrutiny. In early February, major exchanges suspended withdrawals of bitcoin and stepped up their scrutiny of clients after meeting with the central bank.

Emil Chan, vice-president of the Hong Kong Blockchain Society, said it would be difficult for regulators to outlaw bitcoin trading altogether. “There is no option to restrict cross-border sales of bitcoin. It is a smarter move to maintain the operation of the local exchanges if the central bank’s goal is to minimise the outflow of yuan.”

Still, the virtual currency is up more than six times from a year ago, with some participants convinced the bitcoin market is in a bubble. “In fact, the market was too hot. The action taken is an effective action to cool down the global cryptocurrency market,” said Chan.

Meanwhile, Leonhard Weese, president of the Bitcoin Association of Hong Kong, said if China continues to toughen up on regulations to restrict growth in bitcoin, it may drive the business to the city.

“People in China will be more careful about marketing these events, and a lot of that marketing activity will come to Hong Kong in the form of conferences and communities,” said Weese.

It remains to be seen if Chinese bitcoin fans will simply switch to other OTC/bilateral forms of trading, or simply take their trading to neighboring Japan and South Korea which remain eager advocates of trading in the crypto space.