– Schwab: “New Accounts Are At Levels We Have Not Seen Since The Dot Com Bubble” As Millennials Rush Into Stocks:

We can now officially close the book on the “cash on the sidelines.”

One week ago, we reported that in the latest weekly survey of Bank of America high net worth clients, the cash allocation had fallen to an all time low of just 10.4%, below the previous record low of 11% in April 2007 as everyone is “forced” to dance in this market, in which the music is still playing. 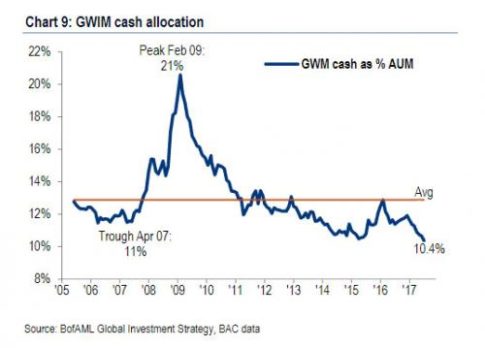 Now, in a separate confirmation of what Deutsche Bank recently classified as market “froth”, Jonathan Tepper points out that the stock euphoria has finally spread to the retail investor.

Case in point: in its Q2 earnings results, Schwab reported that after years of avoiding equities, Schwab clients opened the highest number of brokerage accounts in first half of 2017 since 2000.

This is what Schwab said on its Q2 conference call:

New accounts are at levels we have not seen since the Internet boom of the late 1990s, up 34% over the first half of last year. But maybe more important for the long-term growth of the organization is not so much new accounts, but new-to-firm households, and our new-to-firm retail households were up 50% over that same period from 2016.

In total, Schwab clients opened over 350,000 new brokerage accounts during the quarter, with the year-to-date total reaching 719,000, marking the biggest first-half increase in 17 years. Total client assets rose 16% to $3.04 trillion.

Schwab also adds that just like in the case of Bank of America’s HNW private clients, the net cash level among its clients has only been lower once since the depths of the financial crisis in Q1 2009:

Now, it’s clear that clients are highly engaged in the markets, we have cash being aggressively invested into the equity market, as the market has climbed. By the end of the second quarter, cash levels for our clients had fallen to about 11.5% of assets overall, now, that’s a level that we’ve only seen one time since the market began its recovery in the spring of 2009.

While some of this newfound euphoria may be due to Schwab’s recent aggressive cost-cutting strategy, it is safe to say that the wholesale influx of new clients, coupled with the euphoria-like allocation of cash into stocks, means that between ETFs and other passive forms of investing, as well as on a discretionary basis, US retail investorshas never been more “all-in” stocks than they are now.

But wait, there’s more: throwing in the towel on prudence, according to a quarterly investment survey from E*Trade, nearly a third of millennial investors are planning to move out of cash and into new positions over the coming six months. By comparison, only 19% of Generation X investors (aged 35-54) are planning such a change to their portfolio, while 9% of investors above the age of 55 are planning to buy in.

Furthermore, according to a June survey from Legg Mason, nearly 80% of millennial investors plan to take on more risk this year, with 66% of them expressing an interest in equities. About 45% plan to take on “much more risk” in their portfolios.

In other words, little by little, everyone is going “all in.”

Ironically, Schwab’s own economists were forced to caution its clients that the party may soon be ending as we discussed last week in “Even Schwab Is Warning Retail Clients Of ‘Danger Signs Rising‘:”

A solid earnings season should contribute to a continuation of the bull market in stocks. Dangers are lurking, however, and the possibility of a decent-sized pullback has grown over the past couple of months, in light of monetary policy and geopolitical uncertainties. While we would likely view such a move as healthy, it can be disconcerting. Stay diversified and be prepared to guard against overreacting to any such move.

Because if there is anything retail investors are known for, it is avoiding “overreacting” to “decent-sized pullbacks.” As for those 45% of Millennials planning to take on “much more risk” at the all time highs in the S&P, good luck.