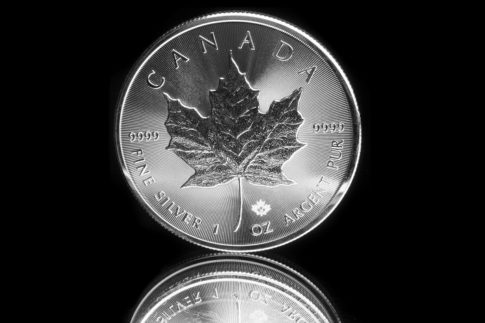 – Mining CEO Explains Why Silver Could Reach Over $136:

His remarks started off like dozens of presentations that I had heard so many times before. . .

“Without silver,” began the speaker, “our entire society would go back to the Stone Age.”

The speaker was the CEO of one of the largest silver mining companies in the world, and he was a special keynote at the annual closed-door meeting of the Atlas 400.

CEOs of mining companies almost always start their presentations talking about how important their mineral is.

“If we didn’t have cobalt we would all be cave men again. . .” or “Without molybdenum our modern technology would cease to exist.”

It sounds impressive, but the same story applies to just about every industrial commodity in the world, from copper to lumber to recycled steel.

It’s hardly an original argument and doesn’t impress me enough to be bullish on their mineral.

The real investment thesis about silver is that it’s a precious metal that has industrial qualities and a long-standing tradition of value.

Like gold, silver was an ancient form of money. And for good reason.

Out of the 118 known elements that exist on the periodic table, gold and silver share certain chemical properties that made them ideal as a medium of exchange to our ancestors.

Gold and silver are solid at normal temperatures (as opposed to Helium). They’re not radioactive (like Plutonium).

Most importantly, gold and silver are rare enough to be valuable, but not so rare that it would be almost impossible to mine more.

Between the two, gold is obviously more rare… hence the higher price.

There’s an old estimate from the US Geological Survey from the late 1960s suggesting that the ratio of silver to gold in the earth’s crust is about 21:1.

(So assuming that’s true, the theoretical price ratio between the two should be around 21:1)

And in ancient times the price ratio between the two metals was frequently in the range of about 15:1, i.e. one ounce of gold was worth 15 ounces of silver.

This is fairly high even by modern standards as the long-term average over the past several decades is about 50.

This would suggest that silver should in increase in price relative to gold in order for the ratio to return to its historic average.

Now, all of this is an argument that many of us have heard before.

But I did learn something over the weekend from the mining CEO; he told us that the current mining production ratio between the two metals is about 9:1.

This means that 9 ounces of silver are mined for every 1 ounce of gold that’s mined.

This is very interesting from a supply/demand perspective.

According to the Silver Institute, demand for silver hit an all-time high in 2016.

But the price of silver, at least relative to gold, is hovering near a multi-year low at 75:1. (Again, the historic average is around 50:1). 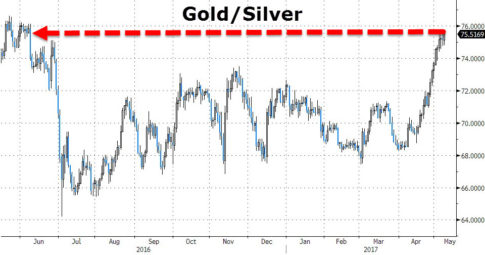 But it seemed clear to him that there’s an unsustainably wide gulf between the gold/silver price ratio versus the gold/silver supply ratio, especially when silver demand is at an all-time high.

That seems to be the case with silver right now.

And while it would be silly to expect $100+ silver, there are certainly credible reasons why the ratio should close the gap and move MUCH lower.