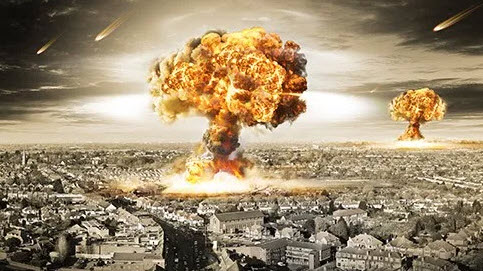 In just a few days, during April 24-26th, Operation Gotham Shield will commence.

It is a tabletop, joint agency exercise involving FEMA, Homeland Security and a myriad of law enforcement and military agencies. WMD, chemical and biological units will all be on hand as a response is tested for a “simulated” nuclear detonation over the United States’ foremost urban center, in the iconic and densely populated island of Manhattan and nearby shores of New Jersey.

The potential for a more explosive false flag to spin out of control, by hijacking and ‘converting’ the simulated actions, is all too real.

This is closely related to the mechanism that many researchers believe was at work on the day of 9/11, nesting a false flag attack inside of a series of large-scale training operations which invoked emergency powers and simulated attacks in locations that were actually hit.

According to the Voice of Reason:

On April 18th thru May 5th, 2017, state, local, and federal organizations alike are planning for Operation Gotham Shield 2017 — a major nuclear detonation drill in the New York-New Jersey area, along with the U.S.-Canadian border.

During this exercise, 4 nuclear devices, 2 of which are rendered “safe” during the U.S. Department of Defense (DOD) Vital Archer Exercise, and one successful 10kt detonation in the NYC/NJ area, along with one smaller detonation on the U.S./Canadian border are to take place.

Among the organizations involved are:

The following document comes form The Nevada National Security Service. Their primary role with the government is to help ensure the security of the United States and its allies by supporting the stewardship of the nuclear deterrent, providing emergency response capability and training, and contributing to key nonproliferation and arms control initiatives.

Will anything catastrophic happen during or after that window of time? Will North Korea really attack the U.S. mainland? Will someone else do so, and blame their overseas enemies?

No one who knows the answers to these questions is willing to talk. For now, all we can do is watch, wait and listen.

Don’t jump to fear and speculation, but don’t lie down or look away either.

These will be trying times.

The prophecy of the “Waldviertler” in German: