Back in 2014 Mark Zuckerberg paid $100 million to purchase 700 acres of beachfront property on the North Shore of Kauai.  The estate includes 1,000’s of feet of pristine shoreline providing the perfect “safe space” for the 30-year-old Silicon Valley Billionaire and his family. 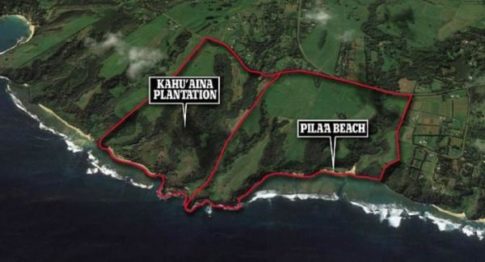 Unfortunately, there was just one little problem with the purchase…technically the sellers didn’t own the title to all of that land due to the so-called Kuleana Act, a Hawaiian law established in 1850 that for the first time gave natives the right to own the land that they lived on.

So now, according to the Honolulu Star Advertiser, the Facebook billionaire sued a few hundred Hawaiians who still have legal-ownership claims to parts of his vacation estate through their ancestors.  Per Yahoo Finance:

Three holding companies controlled by Zuckerberg filed eight lawsuits in local court on December 30 against families who collectively inherited 14 parcels of land through the Kuleana Act, a Hawaiian law established in 1850 that for the first time gave natives the right to own the land that they lived on.

The 14 parcels total just 8.04 of the 700 acres Zuckerberg owns, but the law gives any direct family member of a parcel’s original owner the right to enter the otherwise private compound.

And while Zuckerberg’s lawyer attempted to downplay the lawsuits as a common practice in Hawaii, we suspect the idea of defending your private property rights against one of the top 10 richest people in the world is somewhat intimidating and slightly less than “normal.”

The quiet-title suits filed are designed to identify all property owners and give them the ability to sell their ownership stakes at auction, according to Keoni Shultz, an attorney representing Zuckerberg. Because the ownership stakes are passed down and divided among family descendants by the state, many people don’t realize they have a claim until action is taken against them in court.

“It is common in Hawaii to have small parcels of land within the boundaries of a larger tract, and for the title to these smaller parcels to have become broken or clouded over time,” Shultz told Business Insider in a statement. “In some cases, co-owners may not even be aware of their interests. Quiet title actions are the standard and prescribed process to identify all potential co-owners, determine ownership, and ensure that, if there are other co-owners, each receives appropriate value for their ownership share.”

Of course, the pompous dismissal of property rights isn’t the only thing riling up Hawaiian natives regarding Zuckerberg’s estate.  As The Garden Island pointed out, residents are also slightly less than ecstatic about a massive, 6 foot rock wall erected around the estate and blocking the “view that’s been available and appreciative by the community here for years.”

“The feeling of it is really oppressive. It’s immense,” Hall said. “It’s really sad that somebody would come in, and buy a huge piece of land and the first thing they do is cut off this view that’s been available and appreciative by the community here for years.”

“It’s hot behind that wall. Because it’s up on a berm, there’s not a breath of air on this side from the ocean,” Chantara said. “You take a solid wall that’s 10 or more feet above the road level; the breeze can’t go through.”

Another Kilauea resident, Donna Mcmillen, calls the wall a “monstrosity.”

“I’m super unhappy about that. I know that land belongs to Zuckerberg. Money is no option for him. I’m 5’8” and when I’m walking, I see nothing but wall,” Mcmillen said. “It just doesn’t fit in with the natural beauty that we have here. There are people on the island who money can pay for anything. These kind of things that they do take away what Kauai is all about.”

Over the past couple of weeks, intense public backlash over the lawsuit and “immense, oppressive” wall has caused Zuckerberg to backtrack on his plans. Earlier today he published a note to residents in The Garden Island announcing his intentions to drop his litigation saying that “upon reflection, it’s clear we made a mistake.”

We’ve heard from many in the community and learned more about the cultural and historical significance of this land. Over the past week, we’ve spoken with community leaders and shared that our intention is to achieve an outcome that preserves the environment, respects local traditions, and is fair to those with kuleana lands.

Upon reflection, I regret that I did not take the time to fully understand the quiet title process and its history before we moved ahead. Now that I understand the issues better, it’s clear we made a mistake.

The right path is to sit down and discuss how to best move forward. We will continue to speak with community leaders that represent different groups, including native Hawaiians and environmentalists, to find the best path.

Beyond this process, we are also looking for more ways to support the community as neighbors. We have contributed to community organizations and will continue to do so. We work with wildlife experts to preserve endangered species. We hope to do much more in the future.

We love Kaua`i and we want to be good members of the community for the long term. Thank you for welcoming our family into your community.

But, a local farmer, Joe Hart says that Zuckerberg’s retreat isn’t sufficient and, as of now, vows that the mass protest planned for tomorrow will move forward as “people are furious down here with him.”  Per McClatchey:

“People are furious down here with him,” Hart, a local farmer told Business Insider. “We just want to bring this issue to light. He’s made his money stealing everyone’s information, which we’ve let him do, but to come down here and start suing everyone, that’s not going to fly down here.”

Alas, in the end we’re sure Zuckerberg will have his way.  After all, what fun is billions of dollars if you can’t buy expansive swaths of entire states and trample on the private property rights of some little people?