Just another bloody coincidence, of course. 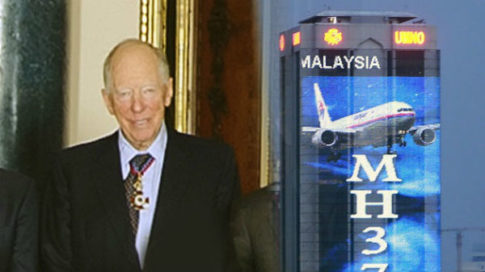 Rothschild the sole owner of a very important patent.

The disappearance of four members of a patent semiconductor traveling on Malaysia Airlines MH370 makes the famous billionaire Jacob Rothschild the sole owner of a very important patent.The mystery surrounding the Malaysian Airlines MH-370 is growing as each day passes with more mysterious silence shadowing the disappearance of the airline. More and more theories are beginning to emerge.

We have heard of black holes swallowing the airliner (likely the least intelligent thing ever said on TV), deranged pilots taking it over… But no media outlet has mentioned anything about who was on that plane.

Absolutely nothing! Well, for starters, the people who owned the patent to Freescale Semiconductor’s ARM microcontroller ‘KL-03′ which is a new improvised version of an older microcontroller KL-02 were on the MH-370 flight.

This report has caught legs across dozens of European based news outlets. Did Rothschild exploited the airlines to gain full Patent Rights of an incredible KL-03 micro-chip? According to the reports, Jacob Rothschild is dubbed as the “evil master plotter”.

A US technolofy  company which had 20 senior staff on board Malaysia Airlines Flight MH370 had just launched a new electronic warfare gadget for military radar systems in the days before the Boeing 777 went missing.

Freescale Semiconductor has been developing microprocessors, sensors and other technology for the past 50 years. The technology it creates is commonly referred to as embedded processors, which according to the firm are “stand-alone semiconductors that perform dedicated computing functions in electronic systems”.

Why were so many Freescale employees traveling together? What were their jobs. Were they on a mission and if so what was this mission? Can these employees be the cause of the disappearance of this plane? Could the plane have been then hijacked and these people kidnapped?

Did these employees hold valuable information, did they have any valuable cargo with them? Did they know company and technological secrets? With all the might of technology why cant this plane be located? Where is this plane where are these people?”

“These were people with a lot of experience and technical background and they were very important people,” Haws said. “It’s definitely a loss for the company.”

In Malaysia, Freescale’s modern operations facility that manufactures and tests integrated circuits (IC) is based in Petaling Jaya.
Based on information obtained from Freescale’s website, the facility began operations in 1972 covering an eight hectare site and is specifically designed for the manufacturing and testing of microprocessors, digital signal processors and integrated radio frequency circuits.
It also owns Freescale RF which is involved in creating solutions for Aerospace and Defence listed below.

Carlyle’s previous heavyweight clients include the Saudi Binladin Group, the construction firm owned by the family of Osama bin Laden.
The fact that Freescale had so many highly qualified staff on board the Boeing 777 had already prompted wild conspiracy theories about what might have happened.

The company says they were flying to China to improve its consumer products operations, but Freescale’s fresh links to electronic warfare technology is likely to trigger more speculation and deepen the mystery.

Experts have been baffled how a large passenger jet seems to have flown undetected and possibly beaten military radar systems for up to six hours even though today’s satellites can take a crystal clear picture of someone crossing a street. // Read Entire Report Here .