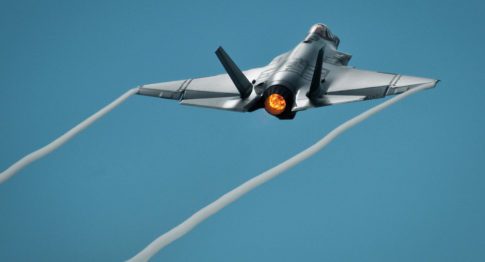 Despite the ongoing risks that the Lockheed Martin fighter jets will crash to the earth, the Pentagon plans to spend an additional $16 billion on another batch of F-35s.

On Tuesday, the Pentagon finally acknowledged that the beleaguered F-35 fighter jet will not be ready for its final test phase until 2018 at the earliest, the latest in a series of setbacks for the expensive next-generation aircraft.

The last major test period before full-rate production, the initial operational test and evaluation (IOT&E) examines whether an aircraft possesses the requisite combat specifics, and ensures that a jet can fly operational missions as intended.

Due to software problems in the F-35, Pentagon officials have postponed the test date for six months past the August 2017 target date, out of an abundance of concern that the jet will not be ready. This is the second major delay in flight-readiness testing, placing the fighter jet an entire year behind schedule.

“We believe that in order to get all 23 airplanes for the operational test fleet to a full 3F production-representative configuration, it is going to take us longer than anticipated,” said Lt. Gen Christopher Bogdan, chief of the Joint Program Office (JPO). “That is merely a function of trying to get those older airplanes fully set to a complete 3F hardware and software capability so they can do IOT&E with production-representative aircraft.”

Bogdan confirmed that the jets have also faced a series of ongoing software glitches that cause systems to shut down in midair, requiring a complete reboot, but said that the delays were traced to software upgrades and compatibility patches, rather than to defects in the F-35’s computer

Officials at Edwards Air Force Base challenged Bogdan’s assessment, in an interview with Defense News, saying that glitches in the F-35’s 3i software substantially delayed earlier testing rounds, “eating up a majority of the team’s schedule margin for beginning IOT&E.”

The US military’s Joint Program Office continues negotiations with Lockheed Martin on the long-delayed ninth and tenth batches of F-35s, valued at about $16 billion, despite ongoing software-system issues that may prevent the jet from ever getting off the ground in a combat capacity.