– “The US Threatened China’s Sovereignty” – China Scrambles Fighter Jets After US Warship Sails Near Disputed Reef:

Following the latest escalation in South China Sea territorial tensions, which culminated with China refusing to grant the Stennis aircarrier group access to the Hong Kong port, overnight the US decided to provoke some more Chinese anger when it sailed the guided missile destroyer the USS William P. Lawrence within 12 nautical miles of Chinese-occupied Fiery Cross Reef, according to U.S. Defense Department spokesman, Bill Urban said. This was the third warship the US has sent into contested waters in the South China Sea in less than seven months.

Chinese facilities on Fiery Cross Reef include a 3,000-metre (10,000-foot) runway which the United States worries China will use it to press its extensive territorial claims at the expense of weaker rivals. 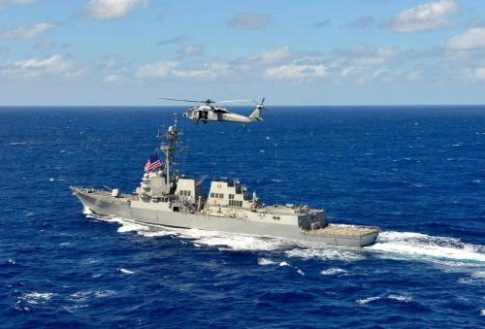 Urban said that the so-called freedom of navigation operation was undertaken to “challenge excessive maritime claims” by China, Taiwan, and Vietnam which were seeking to restrict navigation rights in the South China Sea. What was not said is that the US once again decided to test the preparedness and eagernss of China to respond to what it perceives maritime territorial aggression.

In an emailed statement, Urban also said that “these excessive maritime claims are inconsistent with international law as reflected in the Law of the Sea Convention in that they purport to restrict the navigation rights that the United States and all states are entitled to exercise.” As has been extensively documented, China and the United States have traded accusations of militarizing the South China Sea as China undertakes large-scale land reclamations and construction on disputed features while the United States has increased its patrols and exercises. 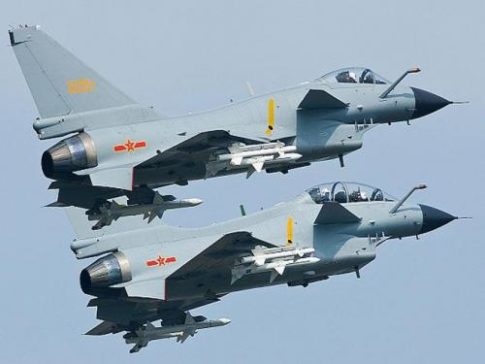 Since the entire purpose of this latest provocation was to observe China’s response, it succeeded when China promptly scrambled two fighter jets in proximity to the U.S. navy ship, a patrol China denounced as an illegal threat to peace which only went to show its defense installations in the area were necessary. China’s Defence Ministry said that in addition to the two fighter, an additional three warships shadowed the U.S. ship, telling it to leave.

The U.S. patrol “again proves that China’s construction of defensive facilities on the relevant reefs in the Nansha Islands is completely reasonable and totally necessary”, it said, using China’s name for the Spratly Islands where much of its reclamation work is taking place.

Additionally, China’s foreign ministry expressed anger after a U.S. navy warship carried out a freedom of navigation operation near a disputed reef in the South China Seas. Ministry spokesman Lu Kang told a daily news briefing the ship illegally entered the waters without China’s permission and that the move threatened peace and stability.

“This action by the U.S. side threatened China’s sovereignty and security interests, endangered the staff and facilities on the reef, and damaged regional peace and stability,” he told a daily news briefing.

This will not be the end of it. China claims most of the South China Sea, through which $5 trillion in ship-borne trade passes every year. The Philippines, Vietnam, Malaysia, Taiwan and Brunei have overlapping claims. 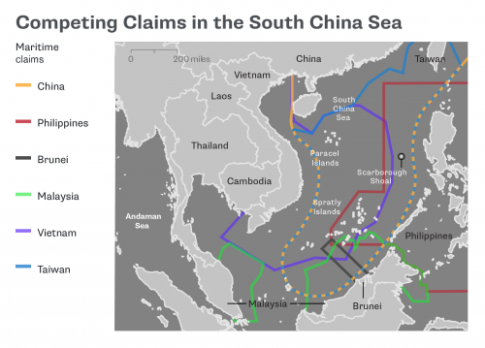 As Reuters adds, the Pentagon last month called on China to reaffirm it has no plans to deploy military aircraft in the Spratly Islands after China used a military plane to evacuate sick workers from Fiery Cross. Ironically, the US makes sure China does just that with its recurring “freedom of navigation operations” in what China considers its own territory; the same way Russia reacts to US spy plans flying in close proximity to its borders.

“Fiery Cross is sensitive because it is presumed to be the future hub of Chinese military operations in the South China Sea, given its already extensive infrastructure, including its large and deep port and 3000-metre runway,” said Ian Storey, a South China Sea expert at Singapore’s ISEAS Yusof Ishak Institute.

“The timing is interesting, too. It is a show of U.S. determination ahead of President Obama’s trip to Vietnam later this month.”

The good news is that while China has reacted with anger to previous U.S. freedom of navigation operations – including the overflight of fighter planes near the disputed Scarborough Shoal last month, and when long-range U.S. bombers flew near Chinese facilities under construction on Cuarteron Reef in the Spratlys last November – so far responses have avoided more dramatic escalation.

Adding to the potential volatility of the situation, Rodrigo Duterte who looks set to become president of the Philippines after an election on Monday, has proposed multilateral talks on the South China Sea. A Chinese diplomat warned last week that criticism of China over the South China Sea “would rebound like a coiled spring.”

The Chinese navy over the past week carried out combat drills in the South China Sea, led by the Hefei, one of the country’s most advanced missile destroyers, according to official Xinhua News Agency. Five other vessels participated, along with three helicopters and dozens of “special warfare” soldiers.