– With A Historic -150% Net Short Position, Carl Icahn Is Betting On An Imminent Market Collapse:

Over the past year, based on his increasingly more dour media appearances, billionaire Carl Icahn had been getting progressively more bearish. At first, he was mostly pessimistic about junk bonds, saying last May that “what’s even more dangerous than the actual stock market is the high yield market.” As the year progressed his pessimism become more acute and in December he said that the “meltdown in high yield is just beginning.” It culminated in February when he said on CNBC that a “day of reckoning is coming.”

Some skeptics thought that Icahn was simply trying to scare investors into selling so he could load up on risk assets at cheaper prices, however that line of thought was quickly squashed two weeks ago when Icahn announced to the shock of ever Apple fanboy that several years after his “no brainer” investment in AAPL, Icahn had officially liquidated his entire stake.

As it turns out, Icahn’s AAPL liquidation was just the appetizer of how truly bearish the legendary investor has become.

As readers will recall, when it comes to what we believe is one of the world’s most bearish hedge funds, we traditionally highlight the net exposure of Horseman Global, which not only has been profitable for the past four years, it has done so while running a net short book. To the point, as of March 31, Horseman was net short by a record 98%.

As it turns out this was nothing compare to Icahn’s latest net exposure.

In the just disclosed 10-Q of Icahn’s investment vehicle, Icahn Enterprises LP in which the 80 year old holds a 90% stake, we find that as of March 31, Carl Icahn – who subsequently divested his entire long AAPL exposure – has been truly putting money, on the short side, where his mouth was in the past quarter. So much so that what on December 31, 2015 was a modest 25% net short, has since exploded into a gargantuan, and unprecedented for Icahn, 149% net short position. 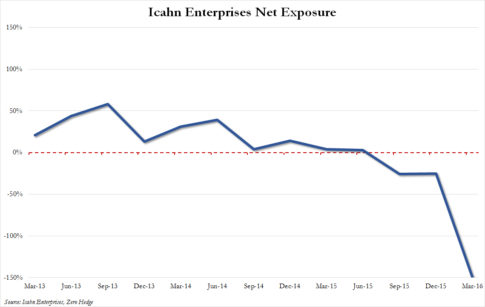 This is the result of a relatively flat long gross exposure of 164% resulting from a 156% equity and 8% credit long (a combined long exposure which is certainly far lower following the AAPL liquidation), and a soaring short book which has exploded from 150% as of March 31, 2015 to a whopping 313% one year later, on the back of 277% in gross short equity exposure and 36% short credit. 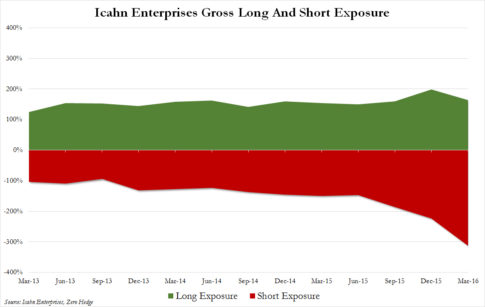 Putting this number in context, in the history of IEP, not only has Icahn never been anywhere near this short, but just one year ago when he first started complaining about stocks, he was still 4% net long. Thos days are gone, and starting in Q3 and Q4, Icahn proceeded to wage into net short territory, with roughly -25% exposure, a number that has increased a record six-fold in just the last quarter!

What is just as notable is the dramatic leverage involved on both sides of the flatline, but nothing compares to the near 3x equity leverage on the short side (this is not CDS). As a reminder, Icahn Enterprises used to be run as a hedge fund with outside investors, but Icahn returned outside money in 2011, leaving IEP and Icahn as the two dominant investors.  According to Barron’s, the entire fund appears to be about $5.8 billion, with $4 billion coming from Icahn personally. Which means that this is a very substantial bet in dollar terms.

When asked about this unprecedented bearish position, Icahn Enterprises CEO Keith Cozza said during the May 5 earnings call that “Carl has been very vocal in recent weeks in the media about his negative views.” He certainly has been, although many though he was merely exagerating. He was not.

“We’re much more concerned about the market going down 20% than we are it going up 20%. And so the significant weighting to the short side reflects that,” Cozza added.

Icahn was not personally present at the conference call, however now that his bet on what is arguably a massive market crash has become public, we are confident he will be on both CNBC and Bloomberg TV in the coming days if not hours, to provide damage control and to avoid a panic as mom and pop investors scramble, and wonder just what does one of the world’s most astute investors see that they don’t.