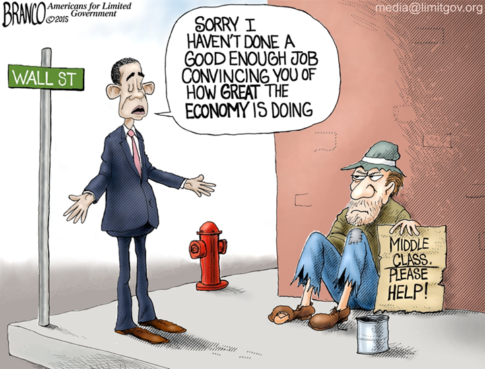 Every year it’s the same: some legacy mainstream media mouthpiece muses on how great Obama’s recovery would be… if only it wasn’t for stingy US consumers refusing to spend like the drunken sailors of days gone by. Last June, it was the WSJ’s Jon Hilsenrath who actually wrote a letter to American consumers, confused by their unwillingness to spend and explicitly accused them of being “stingy” even as the “Federal Reserve was counting” on them to spend, spend, spend. For those who have forgotten this absolute pearl, here it is again:

This is The Wall Street Journal. We’re writing to ask if something is bothering you.

The sun shined in April and you didn’t spend much money. The Commerce Department here in Washington says your spending didn’t increase at all adjusted for inflation last month compared to March. You appear to have mostly stayed home and watched television in December, January and February as well. We thought you would be out of your winter doldrums by now, but we don’t see much evidence that this is the case.

You have been saving more too. You socked away 5.6% of your income in April after taxes, even more than in March. This saving is not like you. What’s up?

We know you experienced a terrible shock when Lehman Brothers collapsed in 2008 and your employer responded by firing you. We know stock prices collapsed and that was shocking too. We also know you shouldn’t have taken out that large second mortgage during the housing boom to fix up your kitchen with granite countertops.  You’ve been working very hard to pay off this debt and we admire your fortitude. But these shocks seem like a long time ago to us in a newsroom. Is that still what’s holding you back?

Do you know the American economy is counting on you? We can’t count on the rest of the world to spend money on our stuff. The rest of the world is in an even worse mood than you are. You should feel lucky you’re not a Greek consumer. And China, well they’re truly struggling there just to reach the very modest goal of 7% growth.

The Federal Reserve is counting on you too. Fed officials want to start raising the cost of your borrowing because they worry they’ve been giving you a free ride for too long with zero interest rates. We listen to Fed officials all of the time here at The Wall Street Journal, and they just can’t figure you out.

Please let us know the problem. You can reach us at any of the emails below.

In retrospect, we can’t help but chuckle at the part about “Fed officials want to start raising the cost of your borrowing because they worry they’ve been giving you a free ride for too long with zero interest rates.”

That said, one year later, it’s the turn of that other administration mouthpiece (owned no less by the man who has converted US consumerism into a business empire, Amazon’s Jeff Bezos) the Washington Post, to dwell on precisely the same topic: why are Americans so paralyzed from fears over a recession that ended so long ago, that instead of spending, American consumers are rushing to save in the process preventing Obama’s wonderful recovery from blooming.

While it does not go so far as Hilsenrath in explicitly accusing consumers of being “stingy”, it does so indirectly when the author of what appears to be a hit piece aimed at the US middle class, or all those who no longer believe in maxing out their credit card, Robert Samuelson says that the real drag in the US economy is “us“, by which he means all those Americans refusing to go out and buy “stuff” (well, maybe not Samuelson: we are confident Samuelson is well compensated by Jeff Bezos to inspire even more AMZN bottom-line boosting consumerism). As a result, “American consumers aren’t what they used to be …. and that helps explain the plodding economic recovery.”

You see, dear American consumers, it’s all your fault. Not soaring, record rents, not spiking health insurance premiums that are eating away at your last disposable dollar, not that the so many of the “jobs created” in recent years have been part-time or minimum wage, not the fact that under ZIRP you can’t generate any interest income and are forced to save even more for retirement, not that as a result of central bank policy pension and retirement funds are unveiling cuts to retiree benefits,  not that real disposable incomes have gone nowhere in the past decade, not even that a third of US households can no longer even afford the basics of food, rent and transportation…

It’s your unwillingness to spend; it is – in the words of the WaPo author – “the surge in saving that is the real drag on the economy.”

Really. Here is the full article:

American consumers aren’t what they used to be — and that helps explain the plodding economic recovery. It gets no respect despite creating 14 million jobs and lasting almost seven years. The great gripe is that economic growth has been held to about 2 percent a year, well below historical standards. This sluggishness reflects a profound psychological transformation of American shoppers, who have dampened their consumption spending, affecting about two-thirds of the economy. To be blunt: We have sobered up.

This, as much as any campaign proposal, may shape our economic future. There’s an Old Consumer and a New Consumer, divided by the Great Recession. The Old Consumer borrowed eagerly and spent freely. The New Consumer saves soberly and spends prudently. Of course, there are millions of exceptions to these generalizations. Before the recession, not everyone was a credit addict; now, not everyone is a disciplined saver. Still, vast changes in beliefs and habits have occurred.

A Gallup poll shows just how vast. In 2001, Gallup began asking: “Are you the type of person who more enjoys spending money or who more enjoys saving money?” Early responses were almost evenly split; in 2006, 50 percent preferred saving and 45 percent favored spending. After the 2008-2009 financial crisis, the gap widened spectacularly. In 2016, 65 percent said saving and only 33 percent spending.

What’s happening is the opposite of the credit boom that caused the financial crisis. Then, Americans skimped on saving and binged on borrowing. This stimulated the economy. Now, the reverse is happening. Americans are repaying old debt, avoiding new debt and saving more. Although consumer spending has hardly collapsed, it provides less stimulus than before. (A conspicuous exception: light-vehicle sales, which hit a record 17.4 million in 2015).

Consider the personal savings rate: the difference between Americans’ after-tax income and their spending. If a household has income of $50,000 and spends $45,000, its savings rate is 10 percent. Here are actual figures. From 1990 to 2005, the savings rate dropped from 7.8 percent to 2.6 percent. Since then, the savings rate has risen; it was 5.1 percent in 2015.

Federal Reserve figures on debt tell a similar story. From 1999 to 2007, household borrowing (mainly home mortgages and credit card debt) increased nearly 10 percent annually, far faster than income gains. People mistakenly believed that they could safely borrow against the inflated values of their homes and stocks. Now, borrowing is subdued. In 2015, household debt of $14 trillion was unchanged from 2007. While many consumers borrowed, others repaid or defaulted.

The surge in saving is the real drag on the economy. It has many causes. “People got a cruel lesson about [the dangers] of debt,” says economist Matthew Shapiro of the University of Michigan. Households also save more to replace the losses suffered on homes and stocks. But much saving is precautionary: Having once assumed that a financial crisis of the 2008-2009 variety could never happen, people now save to protect themselves against the unknown. Research by economist Mark Zandi of Moody’s Analytics finds higher saving at all income levels.

In theory, it’s easy to replace lost consumer demand. In practice, it’s not so easy. Businesses could build more factories and shopping malls. But with weaker consumer spending, do we need them? More exports would help, but economies abroad are weak.

Government policies are also frustrated. The Fed’s low interest rates don’t work if people don’t want to borrow. Ditto for tax cuts. During the Great Recession, Congress enacted several temporary tax cuts to boost consumer spending. The effect was modest, as studies by Shapiro and his collaborators found. Take the case of the two-percentage-point suspension of the Social Security payroll tax in 2011 and 2012. Two-thirds of the tax cut went to saving and repaying debt — not spending.

There is more but we’ll cut off here, wondering why the WaPo article did not have a disclaimer that it is owned by the world’s largest retailer by market capitalization, and will instead add to the scorn.

Yes, dear broke American consumers which once made up the world’s most vibrant middle class: please stop being such a nuisance and source of confusion to nice Op-Ed columnists at the WaPo, the WSJ and, of course, the Fed and their $4.5 trillion in direct injections into the offshore bank accounts of America’s wealthiest 1%, and instead go ahead and splurge all your savings on trinkets, gadgets and gizmos you don’t need.

Only that way will Obama’s recovery be truly complete.