– Two-Thirds Of Germans Are Against Merkel As Right-Wing ‘Terrorists’ Arrested After Refugee Attacks:

Amid the growing ghetto-isation of Muslim Europe, and with 66% of Germans against Merkel, German police have arrested five suspects on terrorism charges in raids on a right-wing group charged with attacking asylum shelters in the east of the country in the midst of Europe’s refugee crisis. German officials have proclaimed the raids show that “the state is moving resolutely and in a timely fashion against right-wing terrorist structures and criminals.” We suspect sadly that more attacks, and more arrests are to come as George Soros calls for Europe to accept 500,000 more refugees per year.

Special federal police forces helped raid apartments centered in the town of Freital near Dresden early on Tuesday, swooping on an organization identified as the Freital Group that targeted at least two shelters with explosives between September and November of last year, the Federal Prosecutor’s office said in a statement. Members of Germany’s GSG-9 anti-terror security forces took part in the raids, N24 television reported.

“To what extent further attacks can be attributed to the right-wing terrorist organization Freital Group remains the subject of further investigation,” the prosecutor said.

The attacks in Freital, in September and at the end of October, involved explosive devices, one of which led to facial injuries for a shelter resident. No deaths or severe injuries occurred because asylum seekers weren’t near the explosions, prosecutors said. At the time, Germany was in the throes of its biggest refugee crisis since World War II.

The five suspects, identified only by their first names and last initials, are linked with a wider organization that allegedly secured the incendiaries in the Czech Republic, the prosecutor said. Charges include attempted murder, assault, causing an explosion and property damage.

Germany’s refugee debate blew into the open after riots last August at an asylum shelter in Heidenau outside Dresden. Chancellor Angela Merkel faced jeers and verbal abuse from onlookers when she visited the site the following week to condemn the violence, before embarking on her open-door policy toward refugees.

This is happening at the same as Merkel’s approval ratings are collapsing. As Martin Armstrong details, 66% of Germans are now against Merkel. 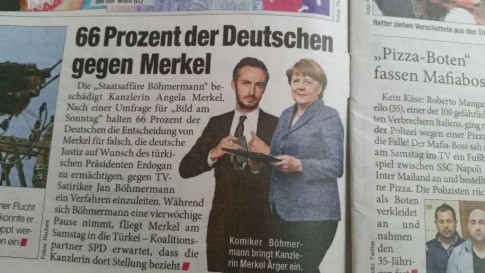 As it now stands if the election were today, she would find perhaps the lowest number of votes of any world leader. It now is impacting everything as vacation spots are seen as possible targets, especially in Spain and France where there is topless bathing. If these people cannot handle a short-skirt, they would go really nuts with topless bathing. The poll also shows that 66% of the people are living in fear as they now see rising expectations over the migrant crisis sweeping Europe has reduced the “feeling” that Europe is safe. Now TWO THIRDS of Germans said they expect Islamic State (ISIS) jihadis to attack their country in 2016. Vacations seem to be looking to America rather than Europe this season. This may have a devastating blow to the European economy later this summer.