– “Getting Things Done” – The Brother of Hillary Clinton’s Campaign Chair is a Major Lobbyist for Saudi Arabia:

Although scores of us in the alternative media world have been discussing the obvious links between Saudi Arabia and the attacks of 9/11 for many years, this reality has only now started to enter the mainstream consciousness due to a recent report on 60 Minutes.

But that’s not the only reason Saudi Arabia has been in the news as of late. In an extraordinary act of blackmail, Saudi officials have warned the U.S. government that it could be forced to sell $750 billion in U.S. assets if a specific piece of legislation currently circulating in Congress becomes law.

The New York Times covered the threat on Friday:

WASHINGTON — Saudi Arabia has told the Obama administration and members of Congress that it will sell off hundreds of billions of dollars’ worth of American assets held by the kingdom if Congress passes a bill that would allow the Saudi government to be held responsible in American courts for any role in the Sept. 11, 2001, attacks.

The Obama administration has lobbied Congress to block the bill’s passage, according to administration officials and congressional aides from both parties, and the Saudi threats have been the subject of intense discussions in recent weeks between lawmakers and officials from the State Department and the Pentagon. The officials have warned senators of diplomatic and economic fallout from the legislation.

Read that last part again. U.S. officials have warned of “diplomatic and economic fallout from the legislation.” So what sort of economic fallout do they envision? Part of the concern is no doubt related to the impact on global financial markets from a Saudi fire sale, but there’s a potentially even bigger concern at play.

Specifically, Saudi Arabia pays Washington insiders an exorbitant amount of money to put the monarchy’s interests ahead of what’s best for the American people. It does this via an elaborate propaganda network, which we first learned about in last year’s post, A Look Inside Saudi Arabia’s Elaborate U.S. Propaganda Machine. Here are a few excerpts:

Elements of the charm offensive include the launch of a pro-Saudi Arabia media portal operated by high-profile Republican campaign consultants; a special English-language website devoted to putting a positive spin on the latest developments in the Yemen war; glitzy dinners with American political and business elites; and a non-stop push to sway reporters and policymakers.

That has been accompanied by a spending spree on American lobbyists with ties to the Washington establishment. The Saudi Arabian Embassy, as we’ve reported, now retains the brother of Hillary Clinton’s campaign chairman, the leader of one of the largest Republican Super PACs in the country, and a law firm with deep ties to the Obama administration. One of Jeb Bush’s top fundraisers, Ignacio Sanchez, is also lobbying for the Saudi Kingdom.

In September, the Kingdom helped sponsor opulent galas for Washington’s business elite at the Ritz Carlton and the Andrew Mellon Auditorium. The events were attended by King Salman, along with the chief executives of General Electric and Lockheed Martin, the chairman of Marriott International, and prominent think tank officials.

The above excerpt mentions the brother of Hillary Clinton’s campaign chair working as a lobbyist for the Saudis, but an article just published at The Hill provides some much needed detail:

Saudi Arabia has threatened to sell off $750 billion in Treasury securities and other assets it holds in the United States if the bill passes Congress, according to The New York Times, which also mentions a fierce lobbying campaign by the country. The selling of assets would prevent them from being frozen by U.S. courts if American victims are able to sue.

The terrorism bill, which President Obama is threatening to veto, would weaken legal immunity of foreign governments in cases “arising from a terrorist attack that kills an American on American soil.”

Saudi Arabia has an army of Washington lobbyists to deploy as it tries to stop Congress from passing legislation that could expose the country to litigation over the Sept. 11, 2001, terrorist attacks.

Five of the firms work for the Saudi Arabia Embassy, while another two — Podesta Group and BGR Group — have registered to represent the Center for Studies and Media Affairs at the Saudi Royal Court, an arm of the government. PR giant Edelman, meanwhile, is working for the Saudi Arabian General Investment Authority to encourage international investment.

The Podesta Group is a top-ranked bipartisan team of tested global advocacy and strategic communications specialists.

So it’s a bipartisan group of lobbyists. In case you forgot what George Carlin told us about “bipartisan.” 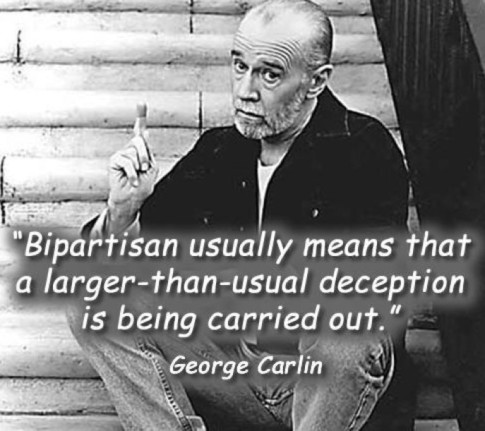 With that out of the way, who runs the show at the Podesta Group? Well that would be none other than Tony Podesta, the brother of Hillary Clinton’s Campaign Chair, John Podesta. Here’s a description of Tony Podesta from the firm’s site:

Many people in Washington can tell you what just happened to you. Tony Podesta helps you change outcomes. From the halls of the Capitol to the agencies that operate the country, Tony draws on his unique mastery of how the nation’s capital works to navigate the policy landscape as Founder and Chairman of the Podesta Group. Dubbed one of DC’s “50 heavy lifters” by the Financial Times and “one of Washington’s biggest players” by The New York Times, Tony is recognized by his peers, the news media and decision-makers across the federal government as the man with the judgment and smart, strategic sense to get things done.

All that said, lobbying for U.S. corporations is one thing. Lobbying for a barbaric monarchy with “classified” ties to the 9/11 attacks is quite another. Yet that’s exactly what the Podesta Group does. Once again, the Founder and Chairman of the firm, Tony Podesta, is the brother of Hillary Clinton’s Campaign Chair, John Podesta.

To see just how much dough the Podesta Group is earning from the Saudis, let’s return to that Hill article:

The dispute is causing a diplomatic storm for the Obama administration; Saudi Arabia has long been an ally of the U.S. despite the country’s history of abusing human rights.

The country has some top-flight representation in Washington — at a hefty price tag.

The Podesta Group is billing Saudi Arabia $140,000 a month for its public relations services. During the last few months of 2015, it sent 27 emails, had two phone calls and one meeting with lawmakers and staffers, journalists, and organizations including Human Rights Watch and the Center for American Progress, disclosure forms show.

DLA Piper receives $50,000 a month from the kingdom and sent hundreds of emails to top congressional staffers between September and the end of February regarding meeting requests and, more generally, “issues affecting U.S.-Saudi Arabia national security interests.”

Only one meeting appears to have occurred, between the firm and a counsel with the House Judiciary Committee. There were also several phone calls with staffers, forms show.

Look at the kind of access to so-called U.S. “representatives” Saudi Arabia achieves through its network of lobbyists. No wonder nobody in Congress has any time to think about the needs of the American people. This is absolutely disgusting. The lobbying of U.S. elected officials by foreign governments via egrgious payments to Washington D.C. insiders should be 100% illegal.

While a foreign nation should have the right to make its grievances known to the U.S. government, this should only be done via officials channels and no money should ever change hands. This is ethics 101.

Of course, the Saudis make sure to spread out the money…

The bulk of Saudi Arabia’s advocacy spending goes to MSL Group, a PR and consulting firm, which took in more than $7.9 million from the country last year, according to a tally of disclosure records.

The firm, which has had the kingdom as a client since 2002, has been working with Saudi Arabia to create a positive image for its military strikes in Yemen, according to news website The Intercept, as well as a more positive image for the U.S. ally overall.

A subsidiary of Saudi Aramco, the Saudi Arabian Oil Company, has also registered as a foreign agent to represent its oil interests and the government of Saudi Arabia.

In September, it shelled out almost $1 million to host an event in Washington during King Salman’s visit.

So the next time you wonder why the U.S government seems to never listen to the American public, you know the answer. You don’t have a lobbyist.

Al Jazeera Presenter to Saudi Ambassador – “Why Support Democracy in Syria but Not Saudi Arabia?”