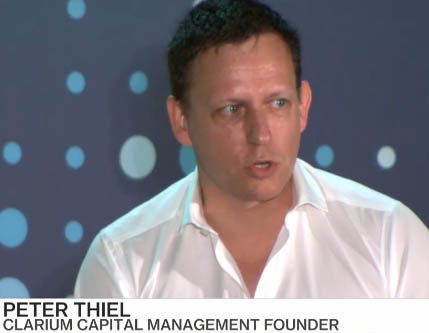 Since the Fed may not, or simply refuses, to see if not a bubble then at least “froth” in any asset class, perhaps it should hire Peter Thiel to be on its macroproduential supervisory committee, because according to the venture capital legend who co-founded PayPal everything is overvalued. Speaking at the LendIt USA Conference in San Francisco on Tuesday, he said that he is “somewhat concerned about the frothiness of the markets” and adds that “startup tech stocks may be overvalued, but so are public equities, so are houses, so are government bonds.”

He adds that “if there is a bubble it is probably centered on the zero % interest rates, the quantitative easing, the money printing and that’s a very strange one because it permeates everything.”

To be sure he remembered that he does have a conflict of interest and tried to tone down the bashing of his own industry: “Silicon Valley is quite far from it. If the bubble is in cash, illiquid startup investments may be a place to hide.”

Then again, in a world in which everything has been upside down for years, maybe he is right.

Thiel also said he plans to remain majority invested in technology companies, he’s actively looking to invest the $1.3 billion that his Founders Fund recently raised abroad and beyond the tech sector.

About two-thirds or three-fourths of Thiel’s investments will be in areas including next generation technologies, consumer Internet, and enterprise software, he said.

“But there’s always this question, should we be doing more things in some other places,” he said. “Maybe we should try to look at places outside Silicon Valley.”

But why, if Silicon Valley is the least of all bubbles?