One month ago we were quite amused by what at that time was one of the most ridiculous short squeezes we have ever seen when the stock of Peabody Energy, exploded higher from $2 to about $6 in days on… nothing. 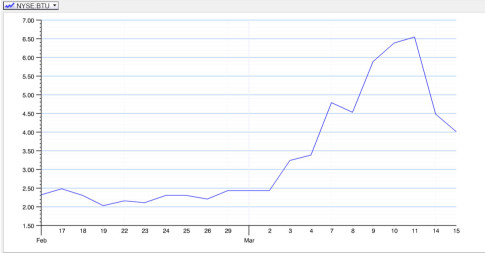 Many scratched their heads at this move as nothing fundamentally had changed in the company’s deteriorating operations, and its bonds are among the most distressed issues trading currently. The move was even more bizarre when just a few days later Peabody warned it may file for bankruptcy protection imminently.

And earlier today, it did just that, when in a historic event, one which is perhaps the lowlight of the sad demise of the US coal industry, U.S. coal giant Peabody Energy, the world’s largest coal producer, which employs 8,300 workers, filed for bankruptcy on Wednesday, the most powerful convulsion yet in an industry that’s enduring the worst slump in decades. The stock has finally responded accordingly. 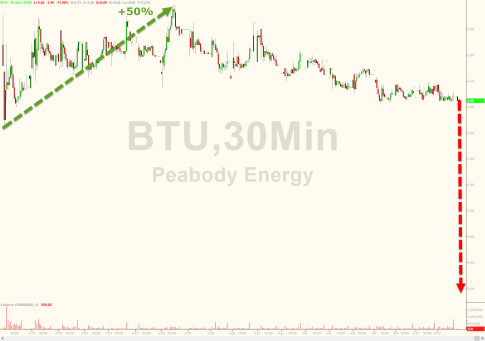 The company filed Chapter 11 petitions for most of its U.S. entities in U.S. Bankruptcy Court in St. Louis Wednesday, listing $10.1 billion in debt. All of Peabody’s mines and offices are continuing to operate and are expected to continue doing so for the duration of the process.

In the bankrutpcy statement Peabody lamented its sad fate: “The factors affecting the global coal industry in recent years have been unprecedented,” Peabody said in the statement. “Still, multiple third-party estimates project that both the U.S. and global coal demand will stabilize. Coal currently fuels approximately 40 percent of global electricity and is expected to be an essential source of global electricity generation and steel making for many decades to come.”

But it is rapidly dropping, as nat gas use soars as a cleaner alternative.

The company listed debt totaling $10.1 billion and assets of $11 billion in its court filing. To help it fund operations in bankruptcy, the company has agreed to $800 million DIP loan arranged by Citigroup.  The bankruptcy leaves uncertainty around Peabody’s $1.47 billion in environmental liabilities. Under a federal law enacted in 1977, mining companies must post surety bonds or other collateral that cover future mine cleanup costs unless their balance sheets are strong enough to qualify for an exemption known as “self-bonding.”

A brief timeline of the venerable company comes courtesy of Bloomberg: founded in 1883 by 24-year-old Francis S. Peabody with $100, a wagon and two mules, the miner is now the largest private-sector coal company in the world, with customers in 25 countries and about 8,000 employees, according to its website. It joins at least four other coal companies that have sought bankruptcy as the industry endures its worst downturn in decades – a result of tougher environmental policies, a flood of cheap natural gas and a global glut of metallurgical coal that’s dragged prices for steelmaking component to the lowest in more than 10 years.

The immediate reason for the bankruptcy is that the price of metallurgical coal has tumbled about 75% since its 2011 peak. That’s been particularly painful for Peabody, which spent $4 billion in 2011 to acquire Australia’s MacArthur Coal Ltd. in an effort to expand its sales of the steelmaking component. No Australian entities are included in the filings, and Australian operations are continuing as usual, according to the statement.

U.S. coal production peaked in 2008, at 1.17 billion metric tons. In recent years, it’s plunged and may fall to 752.5 million in 2016, the Energy Information Administration projected in its monthly Short-Term Energy Outlook released Tuesday.

In an indication of how quickly the underlying fundamentals can shift, as recently as October 2014, Peabody executives were optimistic, saying the worst might be over and investors were encouraged that coal pricing may have hit a bottom. The worst was not over, and the uptick never came.

Last year Peabody began cutting jobs and looking to sell assets. The planned sale of its New Mexico and Colorado assets was terminated after the buyer was unable to complete the transaction, according to Wednesday’s statement.