– THERE IS AN ERROR IN THE VACCINE/SHRUNKEN BABY BRAIN REPORT THAT MUST BE FIXED:

“when these facts are added to the fact that the Zika virus has never done anything prior but cause a mild cold, suddenly blaming it for thousands of shrunken baby brains is outright medical fraud.

– “The Level Of Alarm Is Extremely High” As Zika “Spreading Explosively” WHO Warns:

Well over a year since the global fears over the Ebola epidemic sent US stocks reeling in late 2014 ahead of an even sharper rebound, today the head of the World Health Organization delivered a very stern warning when she said that the Zika virus, a mosquito-borne pathogen that may cause birth defects when pregnant women are infected, has been “spreading explosively” in South and Central America.

“The level of alarm is extremely high,” WHO director general Margaret Chan said Thursday in an e-mailed statement according to Bloomberg. Chan said she will convene an emergency meeting on Feb. 1 in Geneva to consider whether to declare the outbreak a “Public Health Emergency of International Concern,” which can coordinate government responses to direct money and resources at the virus. She added that the spread of the mosquito-borne disease had gone from a mild threat to one of alarming proportions.

Bloomberg adds that according to Chan researchers are working to determine the exact link between the virus and birth defects such as microcephaly, which causes babies to be born with abnormally small heads and potential developmental problems. “The possible links, only recently suspected, have rapidly changed the risk profile of Zika, from a mild threat to one of alarming proportions,” Chan told members of the WHO executive board in Switzerland.

One way in which the Zika virus is comparable to Ebola is that in both cases there is no vaccine and it could take years before one is available.

Another way the Ebola scenario could come back with a vengeance is that the WHO said that it expects the infection to eventually become common in the U.S. Travelers from countries with outbreaks have already been diagnosed on their return to America.

A report from Reuters confirmed this, when it noted that according to the WHO, the Zika virus may affect “between three million and four million people.”

The WHO’s director-general said the spread of the mosquito-borne disease had gone from a mild threat to one of alarming proportions.
Marcos Espinal, an infectious disease expert at the WHO’s Americas regional office, said: “We can expect 3 to 4 million cases of Zika virus disease”. He gave no time frame.

The WHO also added that it wants to prevent inappropriate trade or travel limits due to Zika, but it may be too late for that:

The WHO said it is working to increase surveillance and diagnosis of the virus to spot new cases. Public health officials may also work on methods of mosquito control, hoping to control the virus’s spread by reducing the vector it uses to travel from host to new victim.

That could be difficult because of the El Nino weather pattern, Chan said, which will bring unusually heavy rains, creating puddles and pools where the bugs can breed.

Without a vaccine or effective treatment, some countries have told women to put off getting pregnant for several years.

But the worst news from this outbreak may be for Brazil which has reported 3,893 suspected cases of microcephaly, the WHO said last week, more than 30 times more than in any year since 2010 and equivalent to 1-2 percent of all newborns in the state of Pernambuco, one of the worst-hit areas. 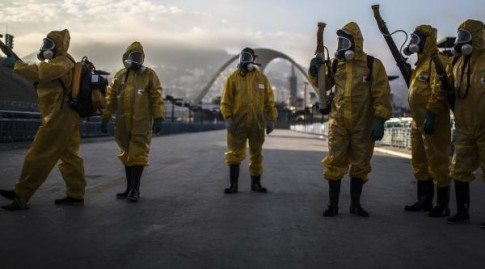 Workers in hazmat suits fumigate the Sambadrome ahead of Carnival celebrations in Rio de Janiero, Brazil.

It is so bad that Brazil has warned the viral outbreak may affect the 2016 Summer Olympics, with the government admitting that it has been a formidable fight. Earlier this week, Brazilian Health Minister Marcelo Castro said the country was losing the battle.

Rio’s authorities have been particularly alarmed by the statement, as the city, usually a hotspot for dengue, will receive hundreds of thousands of visitors during the upcoming Carnival and the Olympic Games set to open in August.

The anxiety over the spread of the Zika virus has become international after several Latin American countries reported hundreds of Zika cases.

Earlier this week, the United States reported its first microcephaly case related to the Zika virus. The mother of the infected baby has been to Latin America. Some countries have issued alerts warning pregnant women not to travel to Zika-affected regions.

Will the Zika panic reach Ebola proportions? For now the story has been mostly contained domestically, however several more Zika cases on US soil and the fear and loathing of October 2014 may quickly repeat once again.