AP: New York City officials say they received the same threat that closed Los Angeles schools and concluded it was a hoax

But LA did not…

Los Angeles police confirmed that all Los Angeles Unified School District (LAUSD) schools are closed Tuesday as police investigate what The LA Times reports as a bomb threat was called into a LAUSD board member. LAUSD is the nation’s 2nd largest district. The LAUSD superintendent said  “I am not going to take a chance when it comes to the lives of students,” stating that the threat was made to many schools, involved packages and backpacks, and says he wants every school is system searched. L.A. police chief says threat still being analyzed, FBI has been notified.

LAUSD schools are closed today due to credible threat. Updates will be provided via https://t.co/AZDfmuaMmu & 213-241-2064.

Board president: all students are safe.

Los Angeles Unified School District officials plan to conduct a news conference after confirming the potential closure of all schools in the nation’s second-largest school district. Details regarding the news conference were not immediately available.

Los Angeles School Police confirmed that all students already at schools will be sent home Tuesday morning. An employee at a school bus yard said drivers were told not to leave the lot.

The district did not confirm whether the decision was due to a potential safety threat.

LAUSD enrolls more than 640,000 students in kindergarten through 12th grade at more than 900 schools. The district covers about 720 square miles in Los Angeles and smaller Southern California communities. 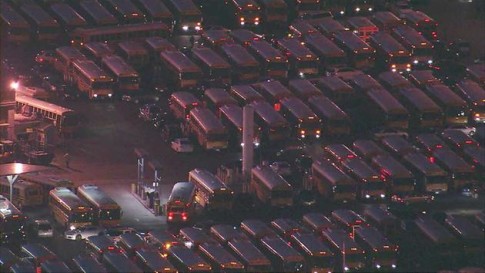 Parents/Guardians please bring proper ID when picking up your child at school. They will be required.