– William Cooper (Member Of The Intelligence Briefing Team Of The Commander In Chief Of The U.S. Pacific Fleet): MajestyTwelve – Bill Of Rights Null And Void (Video)

Here is a link to the book: Behold a Pale Horse – Bill Cooper (PDF) 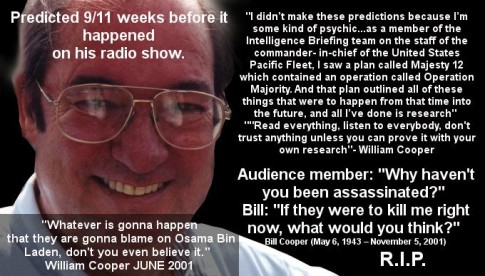 – Why have I never heard of Bill Cooper?:

This was all new to me, so it took a while to scrape through the B.S. and get the facts.

Bill Cooper was a short wave radio host who stated “a huge terror attack would happen and be blamed on Osama Bin Laden” three months before 911. He was shot in front of his home less than one month after the attacks happened.

“I’m telling you,” said Cooper on his June 28 broadcast, “be prepared for a major attack. But it won’t be Osama Bin Laden. It will be those behind the New World Order.” He went on to say, “I wonder what Osama Bin Laden’s targets are supposed to be? And if this doesn’t materialize in the next two or three weeks, it will eventually materialize, because they haven’t succeeded in getting the guns out of the hands of the American people, nor have they succeeded in taking our freedoms away. And so I can tell you with a certainty they must do something terrible.”

After 911, Cooper continued to explain how “powerful people” did 911 and that it was not Arabs, and less than a month after 911 he was dead.

Here is what happened to make it all happen: Someone, who has not been identified to this day, filed a complaint that Bill Cooper made threats with a handgun. Three arrest warrants were then issued.

At 11:40 PM on November 5th, police set up an entrapment scenario at Bill Cooper’s home, in which two plain clothes police officers made a bunch of noise at the end of Bill Cooper’s Cul-de-sac, which happened to be a place where problems repeatedly happened due to college kids partying there. So Bill went out with his car to get the “college kids” to leave. During the entire time telling them to leave, the police officers never identified themselves as police, they just played their roles, trying to create a problem.

Bill told them he was going to call the police to get them to leave. He then got back in his car to return home. While driving back, two more police pulled in front of him from out of the bushes, with an un marked patrol car, still not identifying themselves as police. Bill tried to go around them but was blocked. The second two police officers got out of their car and approached Bill’s car with handguns drawn. Bill got out and ran for it, and in the process of running away, they shot him. Bill did have a gun, and returned fire after taking a bullet, but was shot dead at the scene.

There it is, with all the confusing whitewash cleaned out of all the misleading and intentionally incomplete reports.

Question: IF the police were really there to serve a warrant, why did they start it all by pretending to be a loud and obnoxious frat party? That is just not how it is done. Why did they block him on his way back home, and why did they shoot first? Whoever set him up with a false complaint was never identified, even to this day, almost 15 years later, even after Bill was dead. This proves the event that led to the warrants (which may or may not have ever existed) never happened.

The local police department was not notified anything was going on at all until after Bill was killed.

So someone staged a bogus frame up, issued a phony warrant, sent the police, who shot him dead. They shot first, for reasons other than “self defense” which basically proves they were sent only to kill him to stop his radio broadcasts and the fact that Bill Cooper returned fire after he was shot at proves he was only defending himself. He was set up and murdered, pure and simple. I never knew about this, which proves censorship really did the job.

QUESTION: If Bill Cooper was a nutcase as appears to be claimed in the reports leading up to his death, why was it necessary to kill him at midnight? Why go out with a warrant at midnight? How did he know Osama Bin Laden would be blamed? That alone speaks volumes