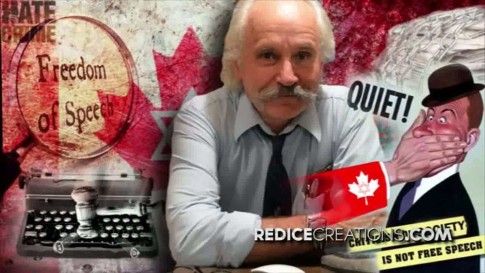 – The Extraordinary Trial of Arthur Topham:

Five security guards, members of the RCMP, two in bulletproof vests, all entrants pass through metal detectors, undergo a wand search, check all electronics including cell phones and have their bags meticulously scrutinized. Why all the security? The crown was presenting its criminal case against Arthur Topham, for the crime of “hate.’

The Law
Section 319 of Canada’s criminal code is an extraordinary law by most western standards. It reads, in relevant part: “(2) Every one who, by communicating statements, other than in private conversation, willfully promotes hatred against any identifiable group is guilty of
(a) an indictable offence and is liable to imprisonment for a term not exceeding two years; or
(b) an offence punishable on summary conviction.

The statute does not define hatred, but does provide 4 statutory defenses.

(a) if he establishes that the statements communicated were true;
(b) if, in good faith, the person expressed or attempted to establish by an argument an opinion on a religious subject or an opinion based on a belief in a religious text;
(c) if the statements were relevant to any subject of public interest, the discussion of which was for the public benefit, and if on reasonable grounds he believed them to be true; or
(d) if, in good faith, he intended to point out, for the purpose of removal, matters producing or tending to produce feelings of hatred toward an identifiable group in Canada.

It is important to understand that the prosecution (the Crown), with all of its resources, need only prove ‘hate,’ and then the only available defenses are affirmative, meaning that the burden of proof switches to the defense.

This week I attended some of the extraordinary trial of Arthur Topham in the Supreme Court (the highest provincial trial court) in Quesnel, British Columbia. As a lawyer, the differences in procedure between American and Canadian courts were of interest to me. Ahead of the trial, I read a little about the Canadian legal system and found that on paper the differences appeared minor. I don’t know if the huge differences in practice that I observed in this trial has to do with the way trials are usually conducted in Canada, the understandable loosening of formality in a court in a small town and/or the nature of the trial.

The history of Mr. Topham’s travails can be found here.

It is sufficient to understand that this trial follows eight years of harassment. Mr. Topham has already had to close his successful remodeling business. This is a criminal trial, and Mr. Topham could go to prison for two years. Mr. Topham and his wife live on a remote property on which they maintain a chicken coop, grow vegetables and engage in other rural activities. But it is clear that Mrs. Topham could not live there alone. These are not wealthy people. Mrs. Topham told me that she is not a political person, but she loves and supports her husband and believes in free speech. The defendant and his wife have exhibited bravery, courtesy and calm to a degree that is awe inspiring.

The police arrested Mr. Topham for ‘hate’ after they received complaints from various Jewish people who found his writing hateful. Although the police clearly knew where he lived, they arrested Topham as he and his wife were driving, leaving his wife stranded and Mr. Topham in jail. While jailed, Mr. Topham’s house was searched and his computers, shotguns and other items were taken. (Shotguns are essential in an area where grizzlies often decide to take up residence on the porch.)

I understand that before I arrived, the Crown presented the arresting and investigating officers. Clearly the officers are not qualified to establish ‘hate,’ so how does the Crown do this? There is no victim to present, no one whose injuries the jury must assess, instead it is to the jury to decide if ‘hate’ is present, no injury need be shown.

The Crown chose to use an expert witness to show hate, and qualified Len Rudner as an expert in Judaism and anti-Semitism. Mr. Rudner’s biography indicates that he is a ‘professional Jew,’ in that he has been employed for the last 15 years by the Canadian Jewish Congress and its successor organization, the Centre for Israel and Jewish Affairs (CIJA). Prior to this trial, Rudner has attempted to force Mr. Topham’s internet service provider to shut down his web site, and has lodged civil complaints against Mr. Topham.

The crown used its questioning of Rudner to introduce what it considered to be the most damaging articles on Topham’s site, Radical Free Press (RFP). These included a list of books and articles, all of which are easily accessible on the internet and/or for sale at Amazon.ca.

Most of these publications accuse Jews of some pretty nasty politics. What at first appeared to be the Crown’s most damning evidence was a picture of a stereotyped Jew holding puppets that were Canadian politicians. On cross examination, it was hard for Mr. Rudner to counter what a careful viewing showed to be a clear political statement. I think the shocking picture of the Jew served to make the statement more powerful. But is it the job of the court to evaluate the strength of a political cartoon?

Without going to the truth of the matters presented, I am troubled that Mr. Topham is on trial for reprinting sources that are widely available in Canada. Again, on cross examination, Mr. Rudner had to admit that this was so. A quick google search for “the protocols of the Elders of Zion,” reveals hundreds of sources that display the protocols in full.

The procedure, at least in this court, was that all objections had to be heard outside the presence of the jury. This meant that each objection forced the jury to leave the room (not the judge and the lawyers) thus making an objection, even for the record, was a cumbersome and time consuming process.

In one of these interminable objection interludes, the Crown stated that ‘free speech is not on trial here.” Shockingly, Judge Butler echoed her sentiments. Legal fictions (such as that all lawyers are capable of providing an adequate defense) are generally employed to allow the system to work. In this case, the legal fiction went to the charge itself. Mr. Topham is on trial for writing and for publishing articles that presumably reflect his beliefs. What else is free speech if not that?

Mr. Rudner indicated under direct examination that he was the author of the written expert opinion he provided to the court. This was troubling, because the Crown had originally employed Bernie Farber as its expert, and Mr. Farber had provided an opinion that was word for word the same as Mr. Rudner’s. If Mr. Rudner did not commit perjury, he was at least deceptive in his presentation of his expert opinion.

Barclay Johnson, defense attorney extraordinaire, gave an opening argument that was an impassioned call for freedom of thought and speech. Later the Crown objected, but the damage so-called had been done. Mr. Johnson endured a tongue lashing and a civil procedure lesson from the judge. The jury was instructed to ignore some of Mr. Johnson’s speech. I assume that this helped plant the speech more firmly in their minds.

Mr. Topham countered the charge of hate and argued as a defense that the writing was political with an expert of his own. Gilad Atzmon, the iconoclastic jazz musician, writer and philosopher volunteered his time to help. It seems wrong to enjoy a presentation when a man’s freedom is at stake, but it was delightful to watch Mr. Atzmon ignore or flaunt every rule of procedure and get away with it. 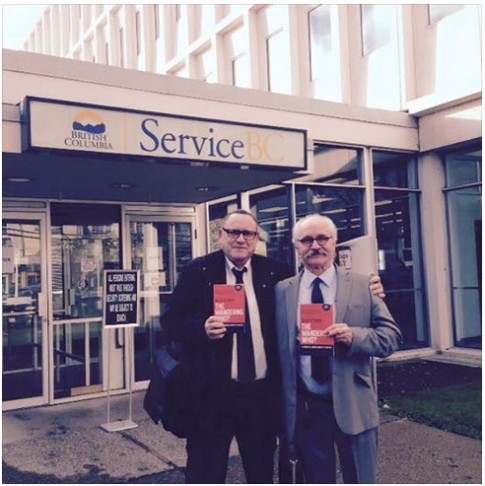 Atzmon was qualified as an expert on Jewish Identity Politics a topic that clearly few in the court had heard of. In his most amusing argument on the subject, Atzmon explained that there was a section on identity politics in every bookshop, and that topics included the LBGT community. Faced with political correctness, the court backed off and agreed to allow Atzmon in as an expert.

Atzmon began by explaining his system of characterization. He divides ‘the Jews’ into three non-exclusive categories. The first, Judaism, is made up of religious Jews. The second, Jews, are people who are Jewish by an accident of birth. The third, and most important category for this purpose is ‘Jewishness,’ those who identify politically as Jews. Mr. Atzmon described the first two categories as innocent. Objections were raised, innocent is, after all, a legal conclusion and if the first two are innocent, the third is, by implication, guilty. Judge Butler agreed with the Crown’s objection and then allowed Atzmon to proceed in describing the first two categories as innocent. From then on, the defense attorney, the prosecution and the judge adopted these categories for clarity of discussion.

Atzmon argued that contemporary opposition to Jewry is driven by political and ideological arguments; that no one criticizes Jews as a race or a biology. There is little criticism of Judaism, the religion, as a whole, but there has been some criticism leveled at a few aspects of the religion such as blood rituals and goy hatred. The thrust of his argument was that Jewish politics and ideology must be subject to criticism like all other politics and ideologies.

Like a rabbi on acid, Atzmon explained his philosophy, allowed few questions, and browbeat the attorneys. He dealt with his own philosophical approach to Jewishness and the dangers of believing oneself ‘chosen’ and then he got in a few swipes at categories one and two as well. The jury was mesmerized. Later, Atzmon told friends that he had directed his remarks to the juror sleeping in the first row. If he could be made to listen, presumably the others could as well.

Atzmon made the point that many of the most apparently anti-Semitic writings were made by the early Zionists. According to Atzmon, Herzl and others saw a problem with European Jewry and thought that the existence of a homeland could cure problems such as usury, discrimination against non-Jews, exclusiveness, etc. The take away is that if Jews are entitled to criticize Jews, why can’t other people? This is especially true because the Jews have a disproportionate amount of power in government, finance and the media. They clearly have the means to counter criticism if they choose to do so.