Back in May we highlighted an infographic showing how China stacks up, from the perspective of maritime military might, to its neighbors and to the US.

The context (of course), is the ongoing dispute over China’s land reclamation project in the South China Sea where Beijing has constructed, at last count, some 3,000 acres of sovereign territory atop reefs in the Spratlys.

As we detailed on Friday, the US and its regional allies say it’s an illegitimate attempt to redraw maritime boundaries and project military supremacy while China claims it’s simply doing what other countries in the region have been doing for years. Should the situation escalate from a war of words to a war of bullets and missiles, here’s a reminder – from the Pentagon’s new Asia Pacific Maritime Security Strategy report – of how the potential combatants match up. 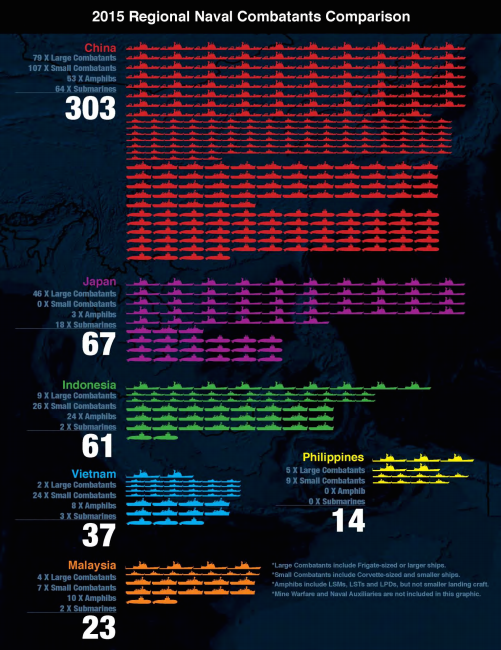 China is modernizing every aspect of its maritime-related military and law enforcement capabilities, including its naval surface fleet, submarines, aircraft, missiles, radar capabilities, and coast guard. It is developing high-end technologies intended to dissuade external intervention in a conflict and designed to counter U.S. military technology. Although preparation for a potential Taiwan conflict remains the primary driver of Chinese investment, China is also placing emphasis on preparing for contingencies in the East and South China Sea. China sees a need for the People’s Liberation Army Navy (PLAN) to be able to support China’s “new historic missions” and operational tasks outside the first island chain with multi-mission, long-range, sustainable naval platforms equipped with robust self-defense capabilities. Although quantity is only one component of overall capability, from 2013 to 2014, China launched more naval vessels than any other country. The PLAN now possesses the largest number of vessels in Asia, with more than 300 surface ships, submarines, amphibious ships, and patrol craft.