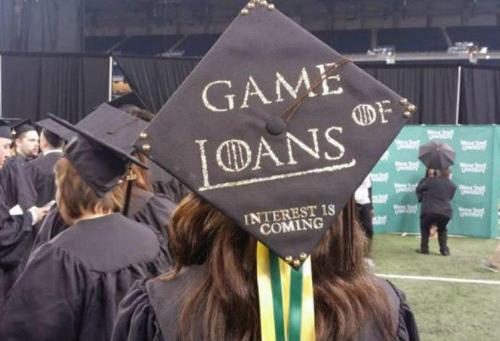 Perhaps it’s all the talk about across-the-board debt forgiveness or maybe the total amount of outstanding student debt has simply grown so large ($1.3 trillion) that even those with no conception of how much money that actually is realize that it’s simply never going to paid back so there’s no point worrying about, but whatever the case, the general level of concern regarding America’s student debt bubble doesn’t seem to be at all commensurate with the size of the problem.

And it’s not just the sheer size of the debt pile that’s worrisome. There’s also the knock-on effects, such as delayed household formation and the attendant downward pressure on the homeownership rate, and of course hyperinflation in the rental market.

Of course one reason no one is panicking – yet – is that the severity of the problem is masked by artificially suppressed delinquency rates. As we’ve documented in excruciating detail, if one excludes loans in deferment and forbearance from the numerator in the delinquency calculation, but includes those loans in the denominator then the delinquency rate will be deceptively low. In any event, as WSJ reports, even if one looks at something very simple like, say, the number of borrowers who haven’t made a payment in a year, the picture is not pretty and it’s getting worse all the time. Here’s more:

Nearly seven million Americans have gone at least a year without making a payment on their federal student loans, a staggering level of default that highlights how student debt continues to burden households despite an improving labor market.

As of July, 6.9 million Americans with student loans hadn’t sent a payment to the government in at least 360 days, quarterly data from the Education Department showed this week. That was up 6%, or 400,000 borrowers, from a year earlier.

The figures translate into about 17% of all borrowers with federal loans being severely delinquent—and that share would be even higher if borrowers currently in school were excluded. Additionally, millions of other borrowers who haven’t hit the 360-day threshold that the government defines as a default are months behind on their payments.

Each new crop of students is experiencing the same problems” with repaying, said Mark Kantrowitz, a higher-education expert and publisher of the information website Edvisors.com. “The entire situation isn’t getting better.”

The development carries big implications for borrowers, taxpayers and the economy. Economists have warned of student-debt defaults damaging borrowers’ credit standing, which would hurt their ability to borrow for things like cars and homes. That in turn would hamper the economy, which relies heavily on consumer purchases for economic activity. Delinquencies also drain government revenues, which are used to make future loans.

So what’s the solution you ask? According to the government, the answer is the income based repayment plans. Here’s The Journal again:

Education Secretary Arne Duncan said declines [in some categories of delinquencies] resulted from rising participation in income-based repayment plans, which lower borrowers’ monthly bills by tying payments to their incomes. Enrollment in the plans surged 56% over the past year among direct-loan borrowers.

The administration has urgently promoted the plans, mainly through emails to borrowers, over the past two years in an effort to stem defaults. The plans set payments as 10% or 15% of their discretionary income, defined as adjusted gross income minus 150% the federal poverty level.

The plans carry risks, though, for both borrowers and the government. Many borrowers’ payments aren’t enough to cover the interest on their debt, allowing their balances to grow and threatening to trap them under debt for years.

At the same time, the government could be left forgiving huge amounts of debt if borrowers stay in the plans. The government forgives balances after 10, 20 or 25 years of on-time payments, depending on the plan. 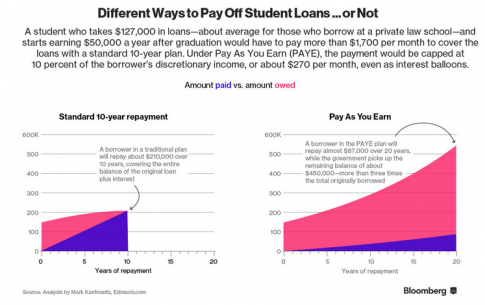 But aside from the fact that these plans will cost taxpayers an estimated $39 billion over the next decade – and that’s just counting those expected to enroll in plans going forward and ignoring the $200 billion or so in loans already enrolled in an IBR plan – the most absurd thing about Duncan’s claim is that, as we’ve shown, IBR programs don’t drive down delinquency rates, they just change the meaning of the term “payment”: 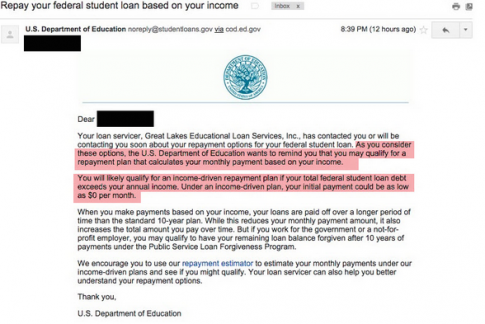 See how that works? If you can’t afford to pay, just tell the Department of Education and they’ll enroll you in an IBR plan where your “payments” can be $0 and you won’t be counted as delinquent.

So we suppose we should retract the statement we made above. You are correct Mr. Duncan, these plans are actually very effective at bringing down delinquencies and the method is remarkably straightforward: the government just stopped couting delinquent borrowers as delinquent.