Now that is escalating quickly.

And it could get much, much worse as I’ve mentioned HERE.

For anyone who might have missed it, Turkey is quickly descending into chaos on all fronts.

The lira is putting to new lows against the dollar on a daily basis as confidence suffers from a worsening political crisis which began in June when AKP lost its parliamentary majority for the first time in over a decade throwing President Recep Tayyip Erdogan’s plan to transform the country’s political system into an executive presidency into doubt. Not one to give up easily (especially when it comes to consolidating his power), Erdogan proceeded to launch an ad hoc military offensive against the PKK in an attempt to undermine support for the pro-Kurdish HDP ahead of new elections which, thanks to the willful obstruction of the coalition formation process, are now virtually inevitable.

Turkey’s central bank hasn’t helped matters and the lira legged lower on Wednesday after it was made clear that a rate hike was not in the cards until Fed liftoff is official. 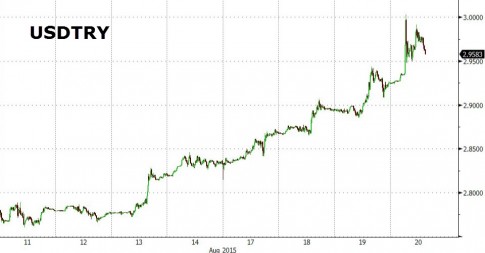 Citi has taken a look at the situation and determined that in fact, the lira is the most vulnerable of all EM currencies they track:

We believe it is going to be difficult for the local markets angle of the EM asset class, in this important (potential) transition of monetary policy in the US, and also taking into account any potential move by the ECB in 2016 (away from a QE stance). That prompted us to revisit our FX vulnerability model. In the model, we look into EMFX from three angles: 1) the macro vulnerability aspect (focused on BoP dynamics, FX reserve metrics, portfolio flows and CDS); 2) interest rate coverage (measured by 1y1y forward real rates, current implied yields and bond yield premium after hedging costs); and 3) our assessment of positioning by real money investors and leveraged accounts in the several EM currencies. TRY, BRL, ZAR, MXN and MYR rank high in terms of aggregate vulnerability. 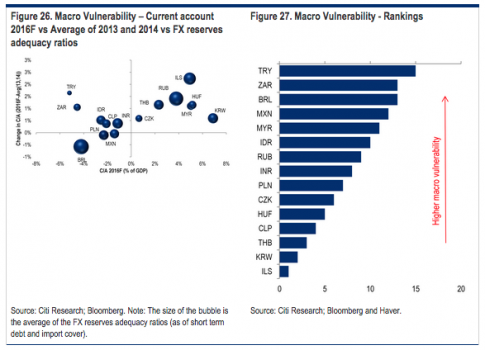 While Morgan Stanley is calling for an emergency rate hike:

What can the CBT do? Given the rapid deprecation in TRY, the CBT could be in a dilemma to decide on the next step. Recent market development could push the CBT to deliver another emergency rate hike, as it did in January 2014. Our economists see the increasing risk of emergency rate hikes of 200bp on the lending rate (upper band). The market dynamic surrounding TRY has become more disorderly with TRY weakening in a low liquidity environment and without any implicit catalyst. This suggests a sharp deterioration in domestic confidence in the exchange rate, extending from investors to corporates and households ? such a dynamic has historically preluded some form of policy response, as we analysed above. While the underlying macro and political factors that have driven USD/TRY to current levels remain in place, and domestic security risks can certainly increase ahead of early elections, we are also more cognisant of the risk of a policy response amid oversold technical conditions on TRY. While real policy rates are positive, they are clearly not high enough to stabilise the currency, and the risk of an increase in rates has risen. We doubt any measures involving the sale of USD will be seen as credible and/or have much impact, as was the case in early 2014.

And then further from Citi:

On the hard currency front, USD leverage in selected economies is sparking once again fears of any systemic implications. It is true to say markets are still far away from a systemic trigger (serious USD funding issues), but we believe it is also correct to adjust CDS (and hard currency spreads in general) higher in curves of economies more dependent on USD funding. Indonesia, Brazil and Turkey are economies that could suffer more (in different magnitudes of course) from a continuous tightening of USD funding conditions. This is the underpinning factor behind our long Turkey CDS position. 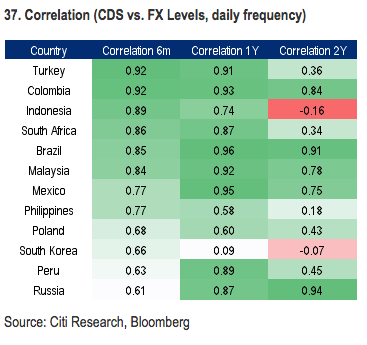 And speaking of CDS, well it’s blowing out to its widest level in three years: 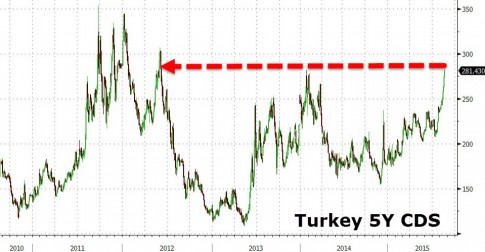 Meanwhile, violence between Ankara and the PKK has escalated (and why wouldn’t it, considering that’s the whole idea for Erdogan). As Bloomberg reports, “assailants tossed a grenade at a guard post at Istanbul’s Dolmabahce Palace [on Wednesday] and then opened fire, setting off a gun battle in the center of Turkey’s largest city.” Later, 8 soldiers were killed by a roadside bomb in southeastern Turkey’s Siirt province – the attack was blamed on the PKK.

As the escalation of violence in the country has raised a sense of insecurity among its citizens, Turkey’s nationalist party leader has called for a declaration of martial law.

His statement was released just hours after the Turkish Armed Forces (TSK) announced earlier on Aug. 19 that militants from the outlawed Kurdistan Workers’ Party (PKK) had killed eight soldiers with a roadside bomb in the southeastern Anatolian province of Siirt.

“In line with Article 122 of the constitution, it is obligatory to definitely secure a section of our country with martial law measures in a way that would include cities and towns [which have been a] scene to violence and horror,” Bahçeli said.

“Under today’s conditions and environment in Turkey, holding an election may light the fuse of a civil war. In this regard, the repetition of elections should definitely be reviewed,” he also said.

Responding by phone, senior AKP lawmaker Ahmet Aydin told Bloomberg that “it’s not necessary and not right to call for martial law in Turkey’s southeast, and a repeat election should be held as soon as possible to eliminate political uncertainity.”

It’s once again worth noting that this is the type of regime – one which is willing to sacrifice its people and economic and financial stability – for the sake of subverting the democratic process and executing brutal power grabs.

As bad as that sounds just remember, it’s all part of the plan to defeat ISIS.

And meanwhile, “nothing to see here, move along”:

Summing it all up: 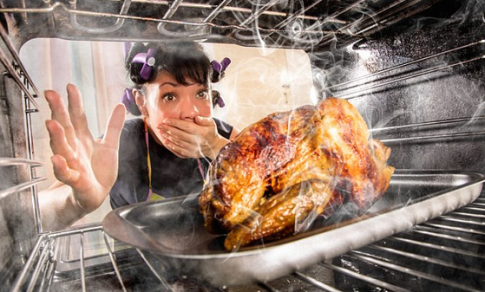