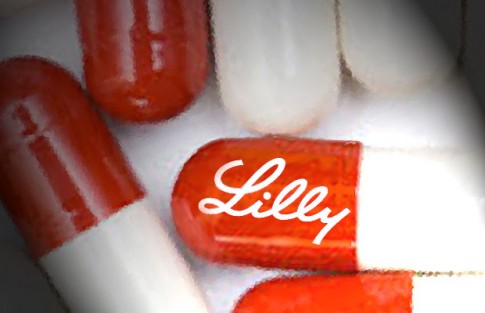 We visited the headquarters of Eli Lilly in downtown Indianapolis where the power of Big Pharma has carved out Indiana’s political landscape, supplied its lobbyists and operatives, and created an empire of profits by (reportedly) treating the symptoms, hiding the risk and harm, and insisting on the safety of products – like Thimerosal and Prozac – without sufficient testing, and even less regard for the lives affected.

Driving up towards it, I had a sick feeling in the pit of my stomach. What we know about this place was just enough to make me feel ill.

With the shameful record of having only one sham of a study on the safety of Thimerosal back in the 1920s, Eli Lilly has had the gall to insist upon the safety of their products – even as its mercury preservative remains a key suspect in increasing vaccine damage cases.

This, even as lobbyists in Washington moved to get a secret rider in the Patriot Act to give immunity to pharma companies in lawsuit cases of autism linked to thimerosal-containing vaccines which would benefit one Big Pharma outfit in particular. Meanwhile, Congressional inquiries are given the run around, whistleblowers have their character assassinated and concerned parents and citizens are ignored, scorned, or ridiculed in the mainstream media.

There admittedly more than 100,000 deaths each year in America that are caused by prescribed use of pharmaceutical drugs – and big damages awarded in vaccine injury courts (paid by taxpayers, not vaccine companies). As the Huffington Post noted, federal courts have now ruled in favor of a vaccine-caused autism and paid victims. The cat is out of the bag:

After years of insisting there is no evidence to link vaccines with the onset of autism spectrum disorder (ASD), the US government has quietly conceded a vaccine-autism case in the Court of Federal Claims.

The unprecedented concession was filed on November 9, and sealed to protect the plaintiff’s identify.

And yet, the FDA is not doing its job, the problem is not going away, and more and more drugs are rolled out each year.

Why does it have to be this way?

What would you say to Eli Lilly?

For those wanting specific, detailed information on vaccine issues, please watch our Truthstream News vaccine episode, where we tried to cover as much of this area as possible.

There’s so much scandal, it just isn’t possible to cover it all, or to recall detailed facts after driving all night on a road trip (which brought us to Lilly HQ).

• Truthstream News: About All Those Vaccines…