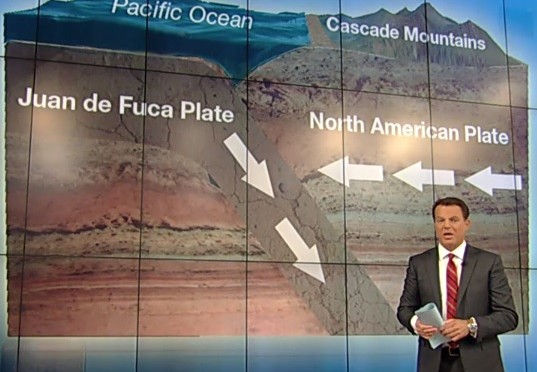 Some of our viewers may see Seattle and Portland destroyed in their lifetimes, says reporter Shepard Smith.

If you or someone you know lives in or near that area, you will want to watch this.

We are positive this will happen, says Smith, reporting on Fox News. “Frankly, if I lived right now in the Pacific Northwest, I’d be considering moving. Seriously.”

The New Yorker ran a “stunning” article this past weekend warning of “The Big One,”  says Smith. A huge and devastating earthquake will strike the Pacific Northwest, Smith warns.  “It’s not a question of whether, only when … And it’s long overdue.”

Most people don’t realize this, says Smith, but we’re talking about 30 times the energy of the San Andreas fault. We’re taking about the worst natural disaster in the history of North America.

We are positive this will happen, says Professor Michio Kaku, a theoretical physicist and best-selling author.

The Juan d Fuca plate is trying to slide under North America, but it’s stuck. When if finally moves, it will create a 700-mile-long wall of water – in some places up to 100-feet high (the height of a ten-story building) –  along with whatever is in its way, like houses and dump trucks and schools. That wall of water will inundate the the Pacific Northwest coast.

“Our operating assumption is that everything west of Interstate 5 will be toast,” says Kenneth Murphy, who directs FEMA’s Region X, the division responsible for Oregon, Washington, Idaho, and Alaska

“The region will be unrecognizable …. That’s Seattle, Tacoma, Portland, Eugene, Salem (the capital city of Oregon), Olympia (the capital of Washington), and some seven million people.”

FEMA expects that nearly thirteen thousand people will die in the earthquake and ensuing tsunami. Another twenty-seven thousand will be injured. On top of that, the agency expects that “it will need to provide shelter for a million displaced people, and food and water for another two and a half million.”

How soon could this Armageddon occur?

It could happen tomorrow. Unfortunately, such earthquakes occur every 240 years on average, and since the last one took place in 1700,  the Pacific Northwest is overdue.

Yes, that earthquake took place in 1700 exactly. A magnitude-9.0 earthquake struck the Pacific Northwest at approximately 9 pm on January 26, 1700, according to seismologist Kenji Satake.

The huge temblor triggered sudden land subsidence, drowned coastal forests, and generated a wave half the length of a continent. “It took roughly fifteen minutes for the Eastern half of that wave to strike the Northwest coast,” says The New Yorker article. “It took ten hours for the other half to cross the ocean. It reached Japan on January 27, 1700.”

During such subduction-zone earthquakes, the receding tsunami carries huge torrents of land off the continental slope, leaving a permanent deposit on the bottom of the ocean, The New Yorker article points out. By counting the number and the size of deposits in each sample, scientists are able to determine how much of the zone has ruptured, how often, and how drastically.

By drilling into the seafloor, those scientists have determined that the Pacific Northwest has experienced forty-one subduction-zone earthquakes in the past ten thousand years.

Divide ten thousand by forty-one, and you get 243, which is the recurrence interval – the average amount of time between earthquakes. Counting from the earthquake of 1700, we are now 315 years into a 243-year cycle.

It is easy to see why Shepard Smith is concerned.

Read all of this great article:
http://www.newyorker.com/magazine/2015/07/20/the-really-big-one