Over the weekend, we showed why contrary to unfounded speculation that Greece is entirely contained, there are still extensive linkages when it comes to the fallout a Grexit would reap if not directly on private commercial banks which over the years managed to offload their Greek exposure to the Europe’s taxpayers…. 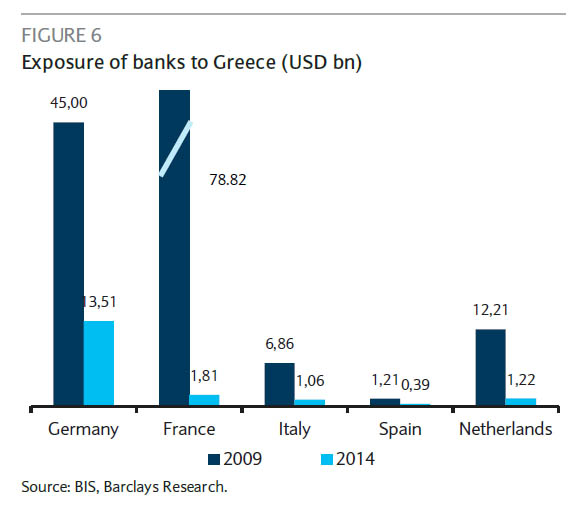 … but on the sovereign economies of the Eurozone as well as the ECB, at first via the EFSF, then also via the SMP, the MRO, Target 2 and so on.

Overnight, Barclays took this analysis and also showed the absolute national euro exposure to Greece broken down by bailout program and also as a % of respective host nation’s GDP. What it found is the following: 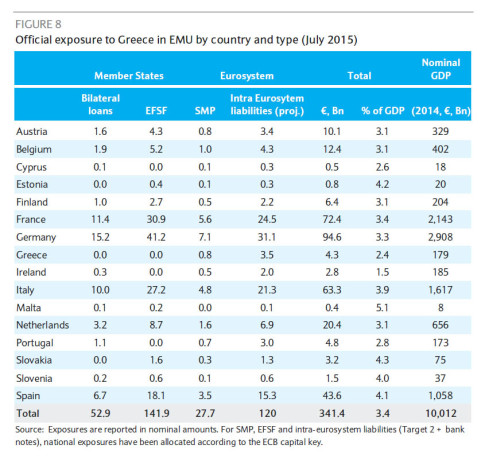 And here is what it looks like when we redo our prior chart showing just European Grexit exposure via EFSF, to total sovereign exposure as a % of GDP. The total amount in question: €341 billion, or just about 3.4% of the €10 trillion in notional European GDP. 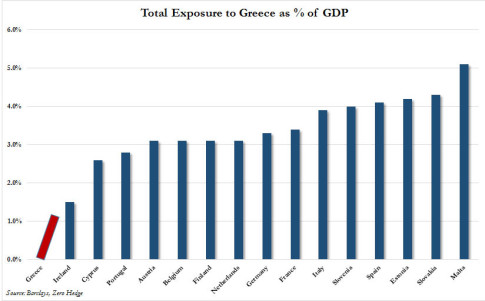 But wait, rules-based Europe has “firewalls” now, all laid out and proper, so there can’t possibly be contagion.

Only that’s not true: for example, two years after introducing the OMT, the ECB still does not even have a regular term sheet laying out the rules of what the purpose of the OMT is aside to be some massive, amorphous “whatever it takes” bazooka. And as for the ECB’s QE, it is all downhill from here as net issuance in Europe trickle to a halt, and the ECB risks crushing an already illiquid bond market by monetizing even more of it. Of course, it could engage in outright stock monetization but that would be the signal that the end of the current system is truly near.

As for “rules-based”, we’ll just leave that to the ECB which just hiked Greek bank collateral effectively admitting the banks are insolvent, but not too insolvent, because now the ECB is officially and without doubt a political entity whose only purpose is to further political agenda.

But that’s just the beginning, and as Barclays cautions investors have largely taken the view that even if the worst case scenario did unfold, the impact on portfolios would be manageable. At this point Barclays warns that it is perfectly plausible that this Sunday’s “no” vote may not follow the benign narrative that markets have largely adopted.

Below are some of the scenarios where the contagion will be worse than any algo, not to mention central banker, expects:

The backstops are not entirely infallible

Some of the backstops, if needed, are either untested or incomplete. One example might be the new banking union. At present, the €55bn resolution fund is still 95% unfunded, deposit guarantee schemes are still mostly ex-post funded and there is still no pan-European deposit insurance. More importantly, holdings of peripheral debt on domestic bank balance sheets are rising substantially in recent years. In Italy and Spain, for instance, domestic government bonds as a percent of total bank assets have risen from 1.5% and 2.3% respectively in 2009, to 6.5% and 7.8% at end 2014 and February 2015 respectively. Any period of prolonged, significant peripheral stress would almost surely lead to some, perhaps significant, widening in bank credit spreads.

As for the ECB’s OMT programme, it has never been tested and it is not quite the pure “lender of last resort” backstop many in the market have come to believe it to be. To start, ECB OMT purchases come with significant conditionality. Any country seeking this assistance must apply for a programme, which would almost surely come with fiscal and structural reform prescriptions.

Greek exit and an official sector default would be new precedents

The biggest risk for contagion, in our view, is that the Greek “no” vote would most likely set in motion two precedents – an exit and default of official sector debt – that have never really been stress tested in the euro zone, either technically, or perhaps more importantly, politically.

As we have said in the past, a default on official sector debt would be large, but technically manageable, at about EUR195bn in bilateral loans and EFSF/ESM loans. In addition, SMP bonds held by the ECB amount to EUR27.7bn and Intra Eurosystem liabilities (mainly Target 2) amount to EUR118bn. Altogether, the official exposure to Greece amounts to about EUR340bn, nearly 3.5% of EA’s GDP, sizeable but probably manageable [ZH: and enough to push the Eurozone into a depression if the entire liability is written off].

A default on the European loans could create considerable political backlash in EA countries against further support for periphery economies. Right-wing parties, such as AfD in Germany, Front National in France, Party of Freedom in the Netherlands, and True Finns in Finland, have repeatedly opposed bail-outs to periphery countries, especially to Greece. But even more moderate parties may question the bail-out mechanisms as the Greek default of 2012 was meant to be a one-off. Smaller countries are also unlikely to take it lightly as; as a percentage of their country GDPs, these countries would bear a larger share of the burden (eg, the Baltic countries).

All of this puts into perspective today’s ECB decision to raise Greek haircuts, because as Goldman noted two weeks ago, it appears to have ultimately been the ECB’s intention to launch a controlled Grexit contagion, one where Europe will see a steep but not too dramatic drop in its GDP, and perhaps a triple-dip recession can be avoided once more with some new changes in the definition of what GDP is, all so Mario can pull a Kuroda from October 31, 2014 and increase the ECB’s QE just so European stocks rise higher, and just as importantly, the EUR slides even more (some 7 figures according to Goldman) toward parity which make both Europe’s – really Goldman’s – bankers delighted when gettting their year end bonus, and keep Germany’s exporters happy.

As for the collateral damage, i.e., millions of broke Greeks who just lost everything, you know what they say about making a QE omelette.

Curiously, the German government hasn’t published estimates of how much it could lose in case of a default, arguing that this scenario could unfold in too many different ways. However, as the WSJ reports, according to the Munich-based Ifo economic institute, total German exposure to Greece, including the loans and a host of other liabilities, at €88 billion while S&P estimates it at €91 billion. This is in line with the estimate shown above.

According to Jens Boysen-Hogrefe, economist with Kiel-based institute Ifo, the hit “would hardly be noticeable for Germans.” He may be right, but where he is wrong is looking at Greece as an isolated case: since Europe is, or rather was, a union, one has to evaluate the combined impact of a third of a trillion in impaired assets across the Eurozone. For the vast majority of European nations, the effect of a “write-off” of 3-4% of GDP would be sufficient to launch a depression, which would then promptly drag Germany lower as well, adverse impact (and thus quite welcome to Germany) on the EUR notwithstanding.

We just hope that the ECB has done its math right and what it believes will be the contained demolition of Greece does not spiral out into an out of control tumble of dominoes, because not even a hollow “whatever it takes” threat from Draghi would offset that, especially if and when the deposit run moves from Greece to Italy, Spain and the rest of the Europe.

1 thought on “Why Greece Matters A Lot: The Case Of Europe’s Falling Dominoes”