Two months ago, we outlined why the CPI-boosting Affordable Care Act is on the verge of bankrupting that all important driver of the US economic growth engine — the American consumer.

Put simply, inflation in medical care services costs hadn’t yet reared its ugly head because many insurers were as yet unable to gauge the full base-effect impact of Obamacare on their P&L. That, we said, was about to change: “After finally digesting the true cost of Obamacare, any recent insurance prime hikes will seem like a walk in the park compared to what is coming. 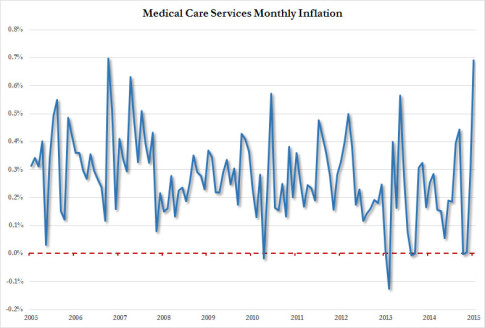 Sure enough, insurers have now taken a close look at exactly how much socialized medicine is costing them.

Not surprisingly, the picture isn’t pretty.

In some cases, forecasters grossly underestimated the number of claims they would likely receive, and indeed, even a PhD economist can tell you that when the amount going out for claims is greater than the amount coming in via premiums, there’s a problem with the model and because staunching the outflow is effectively now forbidden, something has to give on the receivables side of the equation which means dramatically higher premiums.

NY Times has the story:

Health insurance companies around the country are seeking rate increases of 20 percent to 40 percent or more, saying their new customers under the Affordable Care Act turned out to be sicker than expected. Federal officials say they are determined to see that the requests are scaled back.

Blue Cross and Blue Shield plans — market leaders in many states — are seeking rate increases that average 23 percent in Illinois, 25 percent in North Carolina, 31 percent in Oklahoma, 36 percent in Tennessee and 54 percent in Minnesota, according to documents posted online by the federal government and state insurance commissioners and interviews with insurance executives.

The Oregon insurance commissioner, Laura N. Cali, has just approved 2016 rate increases for companies that cover more than 220,000 people. Moda Health Plan, which has the largest enrollment in the state, received a 25 percent increase, and the second-largest plan, LifeWise, received a 33 percent increase.

Jesse Ellis O’Brien, a health advocate at the Oregon State Public Interest Research Group, said: “Rate increases will be bigger in 2016 than they have been for years and years and will have a profound effect on consumers here. Some may start wondering if insurance is affordable or if it’s worth the money.”

The rate requests, from some of the more popular health plans, suggest that insurance markets are still adjusting to shock waves set off by the Affordable Care Act.

“This rate increase is ridiculous,” one subscriber wrote on the website of the New Mexico insurance superintendent.

In their submissions to federal and state regulators, insurers cite several reasons for big rate increases. These include the needs of consumers, some of whom were previously uninsured; the high cost of specialty drugs; and a policy adopted by the Obama administration in late 2013 that allowed some people to keep insurance that did not meet new federal standards.

“Our enrollees generated 24 percent more claims than we thought they would when we set our 2014 rates,” said Nathan T. Johns, the chief financial officer of Arches Health Plan, which covers about one-fourth of the people who bought insurance through the federal exchange in Utah. As a result, the company said, it collected premiums of $39.7 million and had claims of $56.3 million in 2014. It has requested rate increases averaging 45 percent for 2016.

The rate requests are the first to reflect a full year of experience with the new insurance exchanges and federal standards that require insurers to accept all applicants, without charging higher prices because of a person’s illness or disability.

There you go. Precisely as we said, the ACA and of course the ballooning cost of new drugs proxied by Janet Yellen’s “stretched” biotech sector mean manidtorily insured Americans will now be charged more. Much more.

But do not despair because where there’s an Obama there’s always “hope”. And on that note, we’ll leave you with the following, from the President: