My worst fears are being realized. The following information is strongly suggestive that the United Nations is poised to seize control of Jade Helm. Further, the nature of UN involvement with Jade Helm is strongly suggestive of the fact that massive numbers of people will be relocated to camps following a chemical/biological attack. Further, this administration has established the protocols for just such a forced relocation of massive amounts of people.

We have seen the Blue Bell Ice Cream trucks, featured later in this article, that are implicated in this scenario for the presumed transport of a massive amounts of dead bodies. However, what is most disturbing is that in the case of a pandemic, the United Nations will assume operational control over quarantines and the transporting of “sick people” to a receiving facility. Walk with me through this process and I am certain you will agree the dots are beginning to connect which points to a hellish scenario in America’s immediate future. Let’s connect some dots.

The United Nations Is On the Move

This scenraio begins to unfold when I received an email from an alert citizen.

My husband and I were traveling from Louisiana to Dallas, TX.  Saturday. on Interstate 20 westbound.  We passed a convoy of military vehicles on the Interstate headed towards Dallas.  Also,  in an area in which traffic had come to almost a complete stop because of road construction, over to the south of I-20, my husband and I spotted 3 white helicopters hovering in a triangular formation over an open field for over 10 minutes.  Traffic was barely moving for a long time and the helicopters never moved, just hovered.  Also,  someone on Facebook traveling on I-20 in Louisiana today posted a video of UN ambulances being transported in which the UN logo had been taped over on all the vehicles but, on one door the covering had blown loose and you could clearly see the UN logo.  I am praying for the people of Texas and Louisiana to wake up to what is going on especially with these false flag events like prisoner escapee and house to house searches in Texas to gather data about what is in the homes more than likely.  Texas is under attack and now, ironically, the tropical storm system in the Gulf which was originally predicted to head our way in Louisiana at the gulf, has turned and is now going straight through the heart of Texas where they have already had major flooding going on.  Please pray for our nation!!

Along the lines of the Ronelle Ford email, we see the following video footage that was taken in Northern Louisiana on June 10, 2015. Please take note how there was an attempt to hide the UN logos on the UN medical trucks. The logos were covered with brown paper, but the front cover has peeled off and the UN logo is available for all to see. The fact that this is a domestic video is very ominous. Ask yourself, why are UN medical vehicles being spotted within the United States?  What kind of mass casualty event are they expecting and why is our government transfering their sovereign authority over to the Uninted Nations in this type of scenario? This combination of these variables opens a whole can of worms which contains very frightening implications.

The sightings of UN vehicles in Louisiana and Texas are not isolated events. Here we see what is most likely UN helicopters over Washington State. This is a frightening development because the UN is beginning to operate openly on American soil. 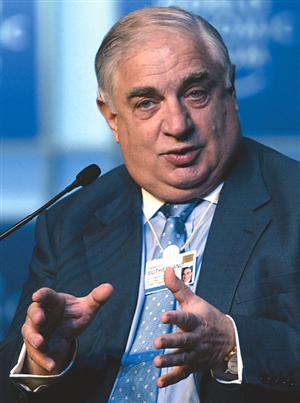 Peter Sutherland an insider’s insider. Head of the UN Migration Council. He will soon be your next landlord.

The UN’s International Migration and Development would be in charge of large scale population movements which would be related to a mass casualty event such as a pandemic. Previously, I have written extensively on who and what would be in charge of the mass migration of the American people and of course, the UN is in charge and the entire operation is under control of the globalist, Peter Sutherland, who masterminded the Gulf Oil Explosion event in 2010. Sutherland is the director of the UN’s International Migration and Development program.

In the event of a pandemic, the Secretary of Human Health Services (HHS) will assume operational control of Federal emergency public health and medical response. However, that authority gives way to the UN’s World Health Organization and the UN International Migration and Development.

In the event of a pandemic outbreak, the HHS will order the quarantining of any pandemic sufferers and the transport of the same to detainment camps, ostensibly to protect the public. The mass transport of pandemic victims to quarantine camps is referred to as “ambulance services”, and it is a euphemism for transporting sick people to a death camp.

This document can be accessed by Googling “ESF #8″ and you will arrive at the following listing and a PDF will appear:

Medical Services include responding to medical needs associated with mental health, ….. assistance are executed by ESF #8 in coordination with DHS/FEMA. … primarily for communications, aircraft, and the establishment of base camps.

ESF #8 established the national ambulance contract, which is designed to provide support for evacuating seriously ill or injured patients.

HHS will enlist the VA and Department of Defense assets (e.g. the military) in support of providing “transportation assets, operating and staffing NDMS Federal Coordination Centers, and processing and tracking patient movements from collection points to their final destination reception facilities” (emphasis added).

As I discovered, the final points of destination tied to the ambulance contracts, are devoid of any medical personnel. But there is no shortage of transport vehicles which will be carrying massive amount of dead bodies, presumably from a chemical and/or biological attack.

DAHBOO 777 was sent the following vehicle from a Colorado resident which involved a convoy of Blue Bell (refrigerated) ice cream trucks. The implications are very obvious. 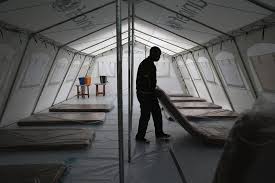 Look at the participating partners in the “hospital” detainment centers in the EFS #8 document.

No Healthcare Personnel at the FEMA “Medical” Detention Camps

In the above list of pandemic detainment centers, I don’t see the CDC or the National Institute of Health listed. Nor do I see any legitimate medical organizations. I don’t even see the presence of any “volunteer” medical organizations such as Doctors Without Borders. Does anyone else find it disturbing that the transport of very sick people will be conducted and the end point is devoid of any medical treatment organizations and/or facilities?

These camps are death camps. There is not one shred of evidence that these camps are intended to treat or even make comfortable people who will contract any type of pathogen or be exposed to something like Ebola. The most disturbing thing is that these camps will be death camps for relatively healthy people. If you are a person who is lucky enough to be discovered to have asthma or merely be temporarily suffering from congestion in one’s lungs from allergies or a simple cold, you could find yourself on one of the Federally approved ambulance services (bus, train, plane) and headed to your final destination.

The Legal Authority to Send “Patients” to FEMA Camps

Before one can “legally” transport a person, who would be potentially exposed to a pathogen,  to “death camps” and await the inevitable, the public must be reassured that the rule of law is being followed.

I published this email a few days ago in a previous article.

My husband is an Army Reservist in Michigan. He is home this weekend after training at Camp Grayling. He know that I am writing to you but please don’t use our names. His unit is training in the processing of Americans into detention camps.He was told by his CO that they would be processing American actors posing as American citizens. Part of their training was the removal and disposal of dead bodies. My husband said he will not participate when the time comes to do so. Please keep getting the word out Dave you are making a difference.

All of a sudden, this email takes on special meaning when we consider the following video produced by Pete Santilli. Go the 2:57 mark and be prepared to be horrified. This puts the closed Walmart stores and their retrofits under a whole new light. 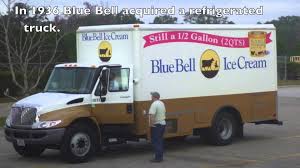 At one point, most of us were naive enough to believe that that the precipitating incident which would make Jade Helm go live would merely be an economic collapse. The facts contained in this article demonstrate that it is very likely that the American people are going to be simultaneously attacked on multiple fronts.