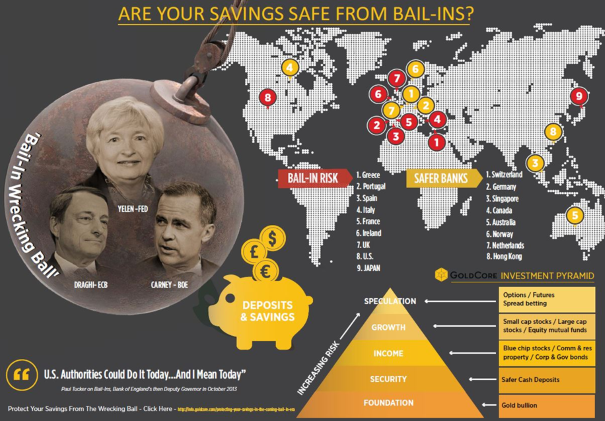 The European Commission has ordered 11 EU countries to enact the Bank Recovery and Resolution Directive (BRRD) within two months or be hauled before the EU Court of Justice, according to a report from Reuters on Friday.

The news was not covered in other media despite the important risks and ramifications for depositors and savers throughout the EU and indeed internationally.

The article “EU regulators tell 11 countries to adopt bank bail-in rules” reported how 11 countries are under pressure from the EC and had yet “to fall in line”. The countries were Bulgaria, the Czech Republic, Lithuania, Malta, Poland, Romania, Sweden, Luxembourg, the Netherlands, France and Italy.

France and Italy are two countries who are regarded as having particularly fragile banking systems.

The rules, known as the Bank Recovery and Resolution Directive (BRRD) ostensibly aim to shield taxpayers from the fall out of another banking crisis. Should such a crisis erupt governments will not be obliged to prop up the banks. At any rate most countries are far too deeply indebted to play such a role.

Instead, the burden is being placed on the creditors. As Reuters put it

The rules seek to shield taxpayers from having to bail out troubled lenders, forcing creditors and shareholders to contribute to the rescue in a process known as “bail-in”.

However, if recent events in Austria are anything to go by, creditors now also include depositors of banks. In April, Austria enacted legislation which removed government liability for all bank deposits.

Until then, the state would protect deposits of ordinary people and companies up to a value of €100,000. In its place a bank deposit insurance fund is being set up. This fund appears inadequate to protect savers’ deposits in the event of any kind of bank failure. We covered the story in more detail here.

Each country will enact its own version of the BRRD. How vulnerable savers are in specific countries is difficult to tell at this time. The drive towards a cashless economy which has accelerated in recent months makes deposit holders and savers ever more vulnerable.

This bail-in legislation which is being driven by the BIS through the Bank of England, ECB, Federal Reserve and Federal Deposit Insurance Corporation (FDIC)  appears designed to protect banks by allowing them to confiscate deposits to prop them up rather than the noble stated objective – “to shield taxpayers”.

Those who hold deposits in our banks are also taxpayers and have already paid tax in order to earn the money that is on deposit.

Allowing for the confiscation of deposits is a retrograde step and may be the last straw for an already enfeebled western banking system. It will also be very deflationary as a primary source of capital and demand – from companies and consumers – is confiscated. Cyprus was devastated by bail-ins and has shown little sign of recovery.

Central banks claim to be attempting to avert deflation with QE and negative interest rates and not simply bailing out and aiding overly indebted banks.

However, the bail-in of deposits would again place the interests of banks over those of taxpayers and depositors. It would be very deflationary and could be the tipping point which pushes economies into a recession and depression.

However, the key insight from Cyprus and the coming move from bail-out regimes to bail-in regimes, is that a precedent has now been created in terms of deposit confiscation. Therefore, simply having deposits in a bank is no longer the safest way to save, protect capital and conservatively grow wealth.

Conservative wealth management, asset diversification and wealth preservation will again become important and gold will again have an important role to play in order to protect, preserve and grow wealth in the coming bail-in era.

Must-read Guides:
Protecting Your Savings In The Coming Bail-In Era
From Bail-Outs To Bail-Ins: Risks and Ramifications –  Includes 60 Safest Banks In the World