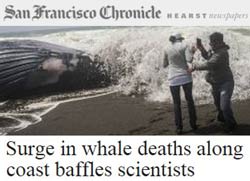 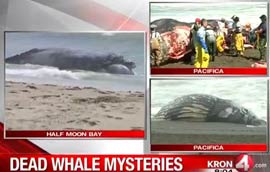 – Surge in whale deaths along West Coast — Experts: “So many in such a small area is setting off alarms… We really don’t know what’s going on” — Professor: “I’m not sure this is just a natural event… There may be a disease in ocean” — Gov’t: “We’re not even concerned about it” (VIDEOS)  (ENENews, May 29, 2015):

NBC Bay Area, May 27, 2015 (emphasis added): In Northern California… a dozen dead whales have been reported… since April, according to Mary Jane Schramm [from the] Gulf of the Farallones National Marine Sanctuary. Others have probably gone unreported…

Press Democrat, May 26, 2015: “It’s alarming because we’re seeing more than we typically see” [said Sheila Semens, Noyo Center for Marine Science]… Three gray whales were beached just last week… There also were reports of a… whale on an inaccessible beach.

KTVU, May 25, 2015: [It] has become a frequent sight: a dead whale…. the spike has experts intrigued… It’s estimated that for every one whale that’s washed up, ten others die at sea.

San Francisco Chronicle, May 29, 2015: So far [it’s] been a futile effort to figure out why so many… are washing ashore… scientists are looking at a variety of factors, including environmental changes…

NBC Bay Area, May 25, 2015: It’s a disturbing trend… why is this happening?… Scientists really don’t have any answers… (Prof. Dawn Goley, Humboldt St. Univ.): “I’m not sure this is just a natural event… or if there’s something to be concerned about.” [She says] there may be a pathogen or disease in the ocean.

KTVU, May 26, 2015: Pamela Van Paris [is] worried about the health of the sea creatures. “It’s kind of like in the mines, the little bird in the cage“… [Schramm] said the concern is those whales washing ashore that seem to be malnourished.

Schramm: “The fact that we’re seeing so many in such a small geographic area is setting off some alarms… [The stranded gray whales are] on an empty tank of gas… that can open up a whole array of malnutrition related diseases.”

Schramm: “We are trying to puzzle together more information… to see if there is any other pattern that would link to all of these… The Farallones sanctuary also has a research vessel going out this weekend. We’re going to start looking at oceanographic data, and see — is there the normal amount of food out there?”

Gulland: Six of the dead were gray whales… In a typical year [it’s] one or two.

KRON, May 20, 2015: There are still a lot of unanswered questions that scientists are trying to figure out… Moe Flannery with the California Academy of Sciences [said] “It’s pretty typical to have multiple whales strandings in a year, just not in the same county”… three to four whales a year wash up along California beaches.

Guardian, May 15, 2015: Why are so many whales dying on California’s shores?… Moe Flannery… is quick to dispel a desire to look for conspiracy theories… she believes [these] are accidents and the timing is coincidental. “We cannot make assumptions or theories… because we did not physically witness the trauma.”

Flannery: “I don’t think there should be any worry, there’s no sign that anything bad is going on”

Justin Viezbicke, NOAA: “At this point we’re not even concerned about it… There’s so many whales that die every year that we just don’t see.”

1 thought on “Surge in whale deaths along West Coast — Experts: “So many in such a small area is setting off alarms… We really don’t know what’s going on” — Professor: “I’m not sure this is just a natural event… There may be a disease in ocean” — Gov’t: “We’re not even concerned about it” (VIDEOS)”