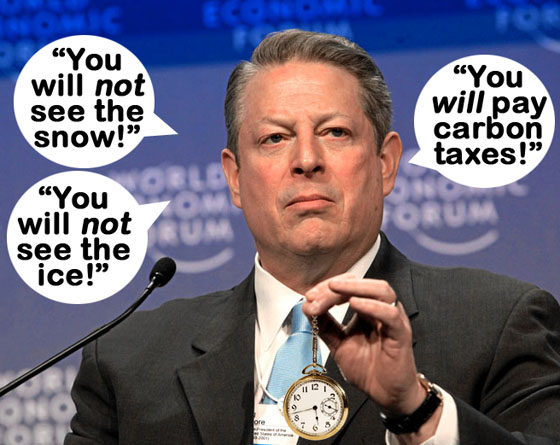 A new study out of the U.K. predicts decades of cooler temperatures and fewer hurricanes hitting the U.S., says this article by Michael Bastasch.

(Excerpts) – Scientists at the University of Southampton predict that cooling in the Atlantic Ocean could lead to a global temperature drop a half a degree Celsius and may offer a “brief respite from the persistent rise of global temperatures.”

“Sea-surface temperatures in the Atlantic vary between warm and cold over time-scales of many decades,” said Dr. Gerard McCarthy, the study’s lead author. “This decadal variability, called the Atlantic Multi-decadal Oscillation (AMO), is a notable feature of the Atlantic Ocean and the climate of the regions it influences.”

“The observations of [AMO] … over the past ten years, show that it is declining,” Dr. David Smeed, a co-author, said in a statement. “As a result, we expect the AMO is moving to a negative phase, which will result in cooler surface waters.”

So far, the dominant explanation seems to be that oceans have absorbed a lot of the heat that would have otherwise gone into the atmosphere. And most scientists argue the world will continue warming because of increasing greenhouse gas emissions.

Some scientists, however, have been arguing the world is indeed headed for a cooling phase based on solar cycles. Scientists from Germany to India have argued that weakening solar activity could bring about another “Little Ice Age.”

“The stagnation of temperature since 1998 was caused by decreasing solar activity since 1998,” wrote Jürgen Lange Heine, a physicist with the German-based European Institute for Climate and Energy (EIKE).

“A drop in global temperature over the next few years is predicted,” Heine wrote.

The Virginia-based Vencore Weather recently reported that “[n]ot since cycle 14 peaked in February 1906 has there been a solar cycle with fewer sunspots.”

We are currently more than six years into Solar Cycle 24 and the current nearly blank sun may signal the end of the solar maximum phase,” Vencore Weather experts noted. “Going back to 1755, there have been only a few solar cycles in the previous 23 that have had a lower number of sunspots during its maximum phase.”

1 thought on “Decades Of Global Cooling Ahead”