This list could grow to 1,000 ideas, but I’ve kept it down to ten. In the future, I might update it and add some more.

There are a lot of bad ideas that dominate the world we live in today, most of which are uncritically accepted as the norm and fully embraced by society.

As a millennial myself, I’ve noticed my peers seem to accept most of these as conventional wisdom. Hook, line, and sinker.

Here are some ideas I was propagandized with that I hope my children will never have to “unlearn.”

Presidential candidates today are fighting over who can kill better by using drones or boots on the ground. By constantly threatening the use of violence against other countries, statists have conditioned the population into thinking that killing tens of thousands of people is normal behavior, instead of the immoral, dangerous provocation it is. Rather than being charged with murder, politicians and others that help support this behavior are often paid $250,000 or more a speech after they leave office, and referred to as Mr. President or former Chairman of the Federal Reserve.

Video games, movies, television shows, and even toys all have a common theme: death and destruction. For example, there’s nothing like teaching your child about policing in 2015 America via these Playmobil toys: 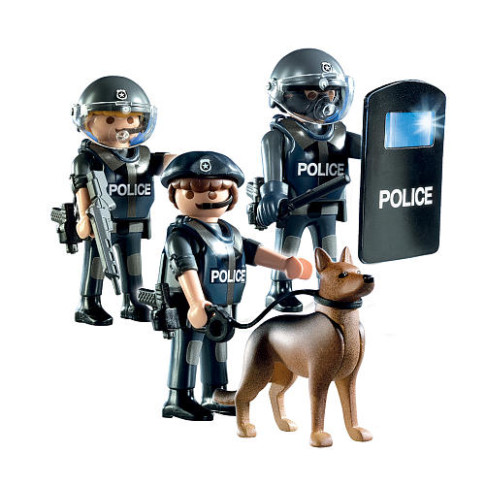 This isn’t normal; this is psychotic. And the sociopaths that rule over us are murdering and imprisoning people every day because “we the people” are not only allowing it, but often times, cheering it on.

Outside of self-defense, respecting other peoples’ property should become the new norm.

As a former Republican, I used to hate the Democrats. Now I see these two parties as just two wings on the same beast.

It’s true that they run with different themes and talking points, but in the end, they govern the same. They share the top donors, vote yes on the same wars, and never roll back a single thing the other does once in power.

Bush picked Bernanke to run the Fed, and Obama re-nominated him. Republicans like Nixon ran on an anti-war platform during the Vietnam era, until Reagan/Bush took over in the 80’s. Then the Democrats were anti-war in the 2000s, until Obama took over in 2008. Clinton, Bush, Obama… looking back at the last 25 years, I don’t see how anything has changed in the U.S. with regard to foreign policy, spending, or lying about U.S. economic data.

The oligarchs have us all fooled. Political parties are nothing more than spectator sport for a dumbed down public.

3. Patriotism is a virtue.

Why? It was an accident that I was born here. Am I grateful to be living in the U.S., surrounded by family and friends? Yes. All the same, I owe the U.S. government nothing. I am a sovereign man, and shouldn’t have to subscribe to any group or nation just because I happened to be born in a part of the world called North America.

I love everyone in this world, and I am not going to express loyalty for a specific region like a sports fan who loves his team only because it’s in the same city he resides in.

4. Illegal aliens are evil criminals who desire to collect welfare from taxpayers.

For a long time, I couldn’t stand these people. Nevertheless, if I wasn’t randomly born in Los Angeles and was instead born just 144 miles south, in Tijuana, I would be doing the exact same thing the illegal aliens are doing. I would be attempting to better my life and my children’s lives by migrating north. Humans moving to different regions is a natural event; the only unnatural thing is the imaginary lines we call borders.

As far as the welfare, that’s a symptom of the disease we call government. It’s like me taking a tax deduction. While I don’t support the income tax, I’m not stupid, and I’m going to do everything I can to game the system and benefit myself.

5. Taxes are justified at gunpoint.

Taxes with the threat of jail or violence is wrong. I’m sorry, but I don’t owe you or anybody else a portion of the fruits of my labor – especially not under the threat of violence.

6. War is good for the economy.

I was told at a very young age, and even in high school, that war helped the economy boom. When you think about it, it makes no sense. Using production lines to create products that blow up into nothing is a tremendous waste of resources. Looking back, after WWII the U.S. cut spending by 50% and reduced the military from 12 million to 1.5 million. The evidence from the late 40’s and 50’s is that the economy boomed when we had less war.

7. Terrorists hate our freedom and culture.

Are there extremists? Absolutely. But the fact is the U.S. has troops in so many countries (see: The Golden Age of Black Ops – In Fiscal 2015 U.S. Special Forces Have Already Deployed to 105 Nations), and has a horrible track record of toppling democratically elected governments, supporting sociopaths, and arming rebels who later become “terrorists.” It’s no wonder than these policies occasionally come home to roost.

For one second, imagine that a nation bombed your neighbor and killed your son. What would your reaction be? These are the situations thousands across the world face on a consistent basis.

What if Iran had troops in Mexico and Canada, ships off our coasts, and drones over our air space? Would we want a nuclear bomb for defense?

George Washington was a terrorist in the eyes of Great Britain. If you want to know who’s dishing out much of the tyranny and chaos in the Middle East, as an American, you don’t have to look far from home.

This is seriously stupid, but college professors and politicians repeat this mantra every day. In reality, the economy is so centrally planned that if the Fed alters one sentence in their statement, the Dow Jones could rally or fall by 200 points in an hour.

Here’s another fact. Nearly 50% of America’s EBT program in Oklahoma went straight to the coffers of one company: Walmart.

Meanwhile, regulations in some industries have forced business to have an entire division dedicated just to compliance. Even worse, many of these regulations are pushed by the larger corporations in order to drown out the competition with bureaucracy they can’t possibly afford.

There is no free market in the U.S. – only crony capitalism, manipulation, and a centrally planned system manned by busybodies.

9. U.S. troops are dying for my freedom.

This is a tough one, because you want to naturally love and respect anyone who does something for you, especially if it’s to protect you from harm. The only reason I even bring this up is because many of the troops are honest, decent young men looking to serve their country or be a part of something greater than themselves. Nevertheless, these men and women are merely being used and abused in a Game of Thrones-esque battle for global wealth and power. They are often just collateral damage for large corporations looking to expand their businesses into territories and countries that, without U.S. military intervention, would likely be thrown out by the locals.

I genuinely think the troops are willing to die for my freedom, but the corrupt American Empire poses a much greater threat to my freedom than any outside enemy we are constantly taught to fear.

Remember in 2006 when the Democrats were going to get our fiscal house in order? Or was that in 2010, when the Republicans were going to do the same? I don’t know, but your vote doesn’t matter. The populace is easily manipulated and/or asleep when it comes to matters of importance, so why bother.

The vote counters and the media have already decided who’s acceptable and, of course, at the end of those strings are the oligarchs who run the world. See my post from last year: Election 2014 – Why I Opt Out of Voting.

Edward Snowden sacrificed his freedom to alert voters of high crimes in the U.S government, and many Americans have no idea who he is. Meanwhile, most politicians want to try him for treason.

Summary: The good news is that because of the communications revolution we are in right now, I truly feel like there is a great awakening happening. We see it in the alternative media boom, blogs like Liberty Blitzkrieg, ZeroHedge, and others are currently challenging conventional wisdom with ferocity and success.

We need to keep fighting.