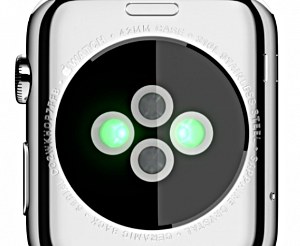 Here’s something interesting and creepy beyond belief – the Apple watch needs to see your blood and know it is being worn before it can receive calls and notifications, OR before it can be used to do any online transaction.
On the back of the Apple watch there is a light that has to penetrate your skin and see your blood before the watch will accept the fact that it is being worn. This is part of the heart monitor function. At first I thought this had to be a hoax, but the apple blogs confirm it is real. Apple refuses to comment.
Because of this, people who have tattoos on their wrist cannot use the apple watch to do much of anything, not even make calls or receive notifications because tattoos block the watch from seeing their blood. They can’t make online purchases or do anything that requires security because the apple watch wants to see your blood to prove it is you wearing it, and if it cannot it will not enable even basic features.
I will never buy an apple watch or anything else like it, it is just too creepy for me. Why on earth would any gadget need to see my blood before it will function? I believe Apple knew the watch would have this problem, and specifically designed it to so the yuppie crowd would buy this gadget, later discover it works this way, and then accept future biometric technologies that function a similar way.
Not for me, not now, NOT EVER.
HOW ABOUT THIS FOR A SMARTWATCH SCENARIO, WHICH IS ACTUALLY A REAL POSSIBLE SCENARIO
Cell phones can be hacked and have their transmitters be modulated in a way that interferes with your heart and can trigger a heart attack. This has been discussed in detail on this web site before. Let me explain a little for people who have not seen this here before – Via AM hetrodyning of your cell phone’s transmitter, it is possible to cause a voltage to be generated in your body, to a depth of a little more than 10 centimeters. If a cell phone is close enough to your body, this voltage can be used to trigger a heart attack. This is not science fiction, it is cold hard reality.
SO, IF YOUR WATCH IS A HEART MONITOR THAT IS COMMUNICATING WITH YOUR CELL PHONE THIS CAN BE TAKEN ANOTHER STEP, WITH YOUR WATCH CONFIRMING YOU ARE DEAD AND YOUR CELL PHONE SENDING BACK A SUCCESS REPORT. The success of assassination via this method is about to get a steep increase. Obviously Apple never thought of this, this is NSA/CIA stuff, however, the Iwatch is
NOT FOR ME, NOT EVER!