– NY Fed Head Of Banking Supervision, And Person Who Handed Over Billions In AIG Profits To Goldman, Resigns (ZeroHedge, April 30, 2015):

The name Sarah Dalgren is well-known to long-term Zero Hedge readers: back in January 2010 we revealed that, just before the Great US banking system backdoor bailout by way of getting a par return on AIG CDS, back in August 2008 Goldman was willing to tear up AIG Derivative Contracts, and had in fact offered to take a haircut. It was the Fed who turned Goldman’s offer down! And the person who made the decision would become the Fed’s head of Special Investments [AIG] Management Group: Sarah Dahlgren.

We said that Dahlgren “not only did not save US taxpayers’ money, but in fact ended up costing money, when they funded the marginal difference between par (the make whole price given to all AIG counterparties after AIG was told to back off in its negotiations) and whatever discount would have been applicable to the contract tear down that had been proposed by Goldman a mere month earlier. This, more so than anything presented up to now, is the true scandal behind the New York Fed’s involvement.“

In other words, Sarah not only did Goldman a huge favor, but in effect made sure that Goldman Sachs would make a massive profit on what would end up being the world’s biggest bailout program and the launch of a series of QE4 program that have led to the destruction of the US middle class.

Obviously, in exchange for her action giving Goldman shareholders billions in undeserved rewards, she was promptly promoted to the role of executive vice president and head of the Financial Institution Supervision Group (FISG), aka the head of Bank Supervision at the NY Fed, a bank which as has been repeatedly documented in recent years, is nothing but a branch of Goldman Sachs.

Moments ago she resigned. 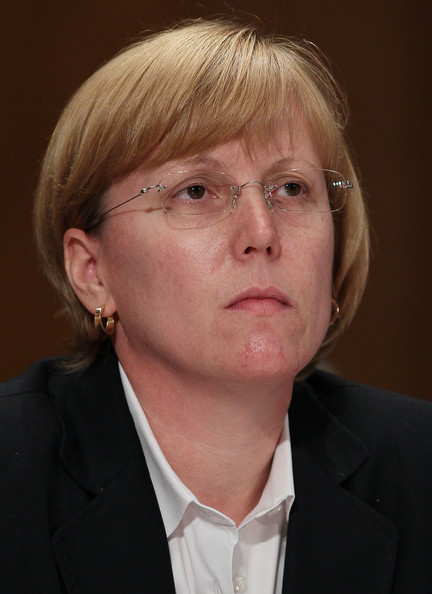 From the NY Fed:

The Federal Reserve Bank of New York today announced that Sarah Dahlgren, executive vice president and head of the Financial Institution Supervision Group (FISG), has announced her decision to resign from the Bank at the end of 2015.

Ms. Dahlgren is expected to remain in her current position as head of FISG until October 1, 2015, to help with a smooth transition and to continue to implement certain organizational initiatives, including the relocation of on-site examiners to the New York Fed’s downtown offices.

On October 1st, Ms. Dahlgren will assume the role of senior advisor to the president of the New York Fed, William C. Dudley. In that capacity, she will continue to assist in FISG’s leadership transition and provide expertise and guidance with respect to broad financial stability matters, including the Bank’s work on financial industry culture and ethics. As senior advisor, Ms. Dahlgren will no longer participate in the supervision of financial institutions or have access to confidential supervisory information.

The New York Fed, in consultation with the Board of Governors of the Federal Reserve System, will immediately begin the search for Ms. Dahlgren’s successor and is in the process of engaging an executive search firm.

“Sarah has been tireless in her service to the Bank and she has accomplished much during her long and distinguished tenure. She has never been afraid to take on the most difficult assignments and has done so with the highest levels of professionalism, integrity and dedication to public service. During the financial crisis, Sarah’s leadership managing the AIG intervention contributed greatly to the success of that effort, which in turn was essential to the Fed’s ability to stabilize the financial system and, as the head of FISG, Sarah implemented many important changes that improved the effectiveness of our supervision efforts,” said Mr. Dudley.

“Sarah drew on the lessons of the financial crisis to implement significant reforms and innovations in how we supervise the largest institutions, including increased engagement with senior leadership, enhanced understanding of the firms’ businesses and broader cross-firm perspectives. She will leave FISG stronger and better positioned to help the Federal Reserve System keep pace with the ongoing evolution of the financial system. I accepted her resignation with great regret and wish her well,” added Mr. Dudley.

Ms. Dahlgren became the head of FISG on January 1, 2011. She was named executive vice president and head of the newly formed Special Investments Management Group in January 2010. Ms. Dahlgren joined the Bank in 1990.