When will the “market” crash?

Directly after Lord Rothschild has given orders to press the sell button. 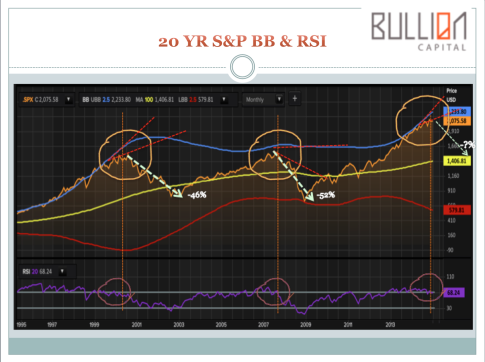 So the fundamental case for a 20 year bull run as BMO is calling for and  certainly many other banks seem to be onboard with that is not looking great YTD.  In fact, most perma bulls have shy’d away from even mentioning fundamentals other than to say that generally they aren’t looking great but don’t worry the Fed is still engaged.   And so I feel its a worthwhile exercise to have a look at the technicals.  Thing about the technicals is that you can cherry pick any baseline point to really make any case, good or bad.  But if we take a look at a time period that encompasses several cycles we negate our ability to cherry pick the baseline and we can be much more confident in our overall analysis.

So what I’ve done is taken a two decade period of S&P pricing which encompasses several cycles.  Mid 1990′s was a market mid cycle having recovered from the short recession of the early 1990′s but before things really began heating up in the late 1990′s.  If we just have a gentle look at the chart we see we’ve had a couple large cycles with fairly extreme booms and subsequent busts.  Currently we are in the midst of the third boom which has taken us to new all time highs.  Now even a 5 year old can look at the chart and say at some point this thing has a large down turn, same as it always does.  That’s easy to see and not many will argue it.  But as so many bulls remind us we could have said the same thing about this chart a year ago and we’d have missed out on significant returns.  Very true.  So the key is then figuring out where the down turn begins.  I know I know that’s the kind of stuff you have to go to biz school for eh.  Ok so let’s first have a look at the easy chart. 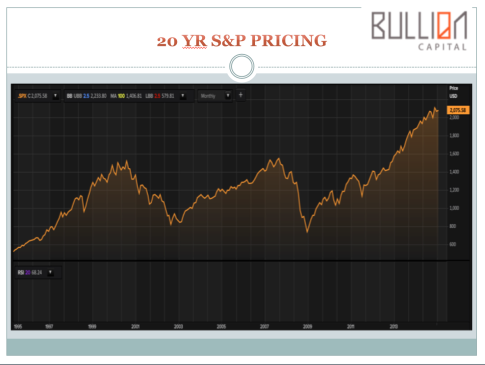 So pretty simple.  Two full cycles and into the third which doesn’t tell us much.  Let’s add some markers to see if we can’t pick up on some technical cues.

So what we’ve done is run a 2.5 standard deviation Bollinger Band (BB) using a 100 period moving average looking at monthly returns because we are interested long cycle technical cues.  We’ve also run Relative Strength Indicator (RSI) using 20 periods.  What we find is actually quite notable.  During the tech bubble cycle we saw the S&P rise to the upper BB where it tracked the upper band for some time.   During that same period we saw the RSI move above 70.  Now as the market peaked we saw the S&P move below the upper BB and we also saw a decline in RSI.  What is very interesting is that the point where RSI dropped below 70 is the point the tech bubble burst and sent S&P into a free fall.  The market continued to sell until the RSI dropped below 30 at which point the market stabilized and reversed higher.

This took us into the start of the credit bubble cycle.  Here the RSI move up very quickly and plateaued just below 70 for several years during which time the S&P moved up but never quite made it to the upper BB.  Then in 2007 the RSI moved above 70 but then quickly reversed back down below the upper band.  Interestingly again the RSI dropping below the upper band seemed to trigger the bursting of the credit bubble as we saw S&P again move into free fall.  Then here too we saw the market stabilize as the RSI moved through the bottom band.

And again this brought us into the latest Fed bubble.  Now during this latest cycle the RSI moved up but bounced off the upper band a few times without actually breaking through 70.  At the same time the S&P moved higher but with quite heavy volatility.  Eventually we saw the RSI move up and break through the upper limit.  It was about the same time that the S&P traded higher to the upper BB where it tracked for some time.  However, at the end of November 2014 the S&P started to dislocate and moving down below the upper BB.  And then ominously January of this year we saw the RSI also move below the upper RSI band.

Remember this technical signaled the popping of the past two bubble cycles.  Now February saw the RSI move back above the upper band but March moved back down below.  I would watch this very carefully now.  I would venture to say if April remains below the upper RSI band we could very well have moved into the latest and perhaps greatest period of wealth destruction. It is time to protect those assets.