While the escalation of the second Cold War between Russia and the US over their proxy conflict in Ukraine has been relegated to the back pages due to the lack of any flash points in recent months, events in eastern Europe continue to build up to an increasingly unstable equilibrium. Just yesterday, Russia again accused the United States of “seeking political and military dominance and sought to put blame on the West for international security crises, including the conflict in east Ukraine.”

It didn’t stop there. According to the WSJ, Russia’s top general warned European countries planning to host installations for a U.S.-led missile-defense shield that Russian forces would be forced to target them.

“Nonnuclear powers where missile-defense installations are being installed have become the objects of priority response,” Gen. Valery Gerasimov said, referring to Poland and Romania.

It was unclear if Russia would use conventional weapons or tactical short-range nuclear missiles for deterrence purposes.

The comments came at a defense conference in Moscow where a series of high-level Russian leaders repeatedly warned of perceived threats that the U.S. and the North Atlantic Treaty Organization posed to modern Russia.

Russian Defense Minister Sergei Shoigu said, according to Reuters, that a drive by the United States and its allies to bring Kiev closer to the West was a threat to Moscow and had forced it to react.

“The United States and its allies have crossed all possible lines in their drive to bring Kiev into their orbit. That could not have failed to trigger our reaction,” he told an annual security conference in Moscow.

General Valery Gerasimov, chief of the General Staff of the Russian Armed Forces, reiterated Russia’s warning: “Considering themselves the winners of the Cold War, the United States decided to reshape the world to fit its needs.”

“Aiming at complete dominance, Washington stopped taking into account the interests of other countries and respect international law.”

When asked about the annexation of Crimea and the ongoing conflict in Ukraine, Shoigu “blamed the violence on Kiev and sought to dismiss Western criticism that Russia was forcibly remaking European borders, pointing in turn to Western military involvement in Serbia, Iraq and Libya.”

Russian Foreign Minister Sergei Lavrov told the conference attended by envoys from China, Iran, Pakistan and some of Russia’s regional allies, that Kiev had to deliver on its obligations under peace agreements reached in Minsk to “safeguard unity of the Ukrainian state”.

The problem is that at this point it doesn’t matter who started what, where and how: just like the Intifada, or any other regional, thousand year-old conflict in Europe or any other part of the world, all that remains are the escalating steps, and how long until one of the two adversaries snaps and engages in an action from which there is no return.

Yet despite Russia’s very clear threat that its missiles are now armed at two more NATO countries, and numerous previous warnings that the official dispatch of US troops in Ukraine, besides the countless ones who are there on a mercenary basis, will lead to a flash point in the second Cold War, earlier today 300 hundred US paratroopers arrived in Ukraine – a non-NATO country – to “train its forces fighting pro-Russian rebels” according to the US army website.

As AFP notes, the move could “destabilize” the war-torn ex-Soviet country, which clearly is the intention. Because as we have warned on numerous occasions, the entire world is now headed into an event horizon in which the neo-cons have bet that only regional (or not so regional) war can be the economic stimulus that pushes the world out of its global depressed funk. Just like the first Great Depression.

According to AFP, the troops from the 173rd Airborne Brigade arrived on Tuesday and Wednesday in Yavoriv, western Ukraine, to spend six months training three battalions of Ukrainian troops, the army said in a statement.

“We will have about 300 soldiers from the brigade on the ground providing the training that will last over the next six months,” said US army spokesman Donald Wrenn.

Moscow was obviously displeased: “The participation of instructors and experts from third countries on Ukrainian territory … of course, does not help to resolve the conflict,” president Vladimir Putin’s spokesman Dmitry Pekov said, quoted by Russian news agencies.

“On the contrary, it can seriously destabilise the situation.”

Just as Russian troops training Mexican Federales would be sternly frowned upon by the Obama administration.

But that’s doesn’t matter: what matters is that US troops will now train the National Guard of Ukraine, a reservist force that was reformed in 2014 to bring volunteers and militia under government control. They will do so literally within meters of the Russian border.

“We will be conducting classes on war-fighting functions, as well as training to sustain and increase the professionalism and proficiency of military staffs,” Major Jose Mendez, operations officer for the brigade, was quoted as saying on the US army website.

Ukraine had asked the United States to send the training mission, dubbed Operation Fearless Guardian, according to an article published by the US army on April 11.

This is what paratroopers, from the 173rd Airborne Brigade, arriving at Lviv International Airport on April 11, 2015 look like courtesy of the US Army’s website: 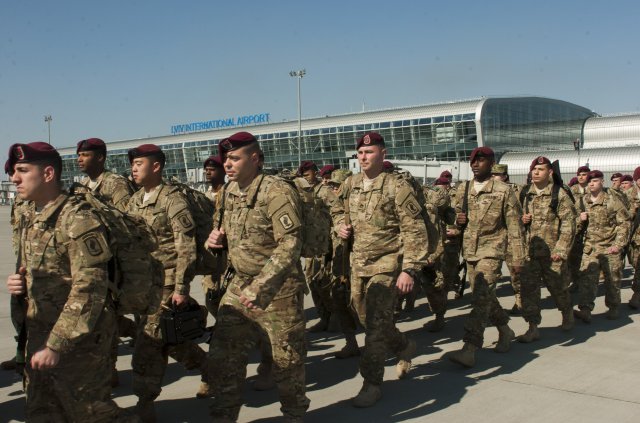 According to the US Army the brigade, as the Army Contingency Response Force in Europe, is conducting continuous operations in six different countries.

“This is the new norm for the 173rd,” Mendez said. “The 173rd is in a special position, as the only forwardly-positioned airborne brigade in Europe, we have the ability to be anywhere in the U.S. European Command area of responsibility in 18 hours or less.”

The brigade has trained with Ukrainian forces in international exercises throughout Europe, as well as within Ukraine, most recently last September in the Rapid Trident series of exercises, an annual U.S. Army Europe-led exercise designed to promote regional stability and security. The two forces are scheduled to participate in Exercise Rapid Trident 2015 later this year.

A ground convoy drove all the way from the brigade’s base in northern Italy to the Ukrainian military zone in Yavoriv near the Polish border, with vehicles and equipment.

The US and Ukrainian armies stressed the equipment was for use by the US brigade in the training and is not to be issued to Ukrainian forces. Fifty paratroopers travelled with that 25-vehicle convoy, which arrived on April 10, while further troops arrived on April 14 and 15, the US army website said.

Ukraine’s defence ministry said in a statement that the training would begin with a ceremony on April 20.

What happens after will likely assure the second consecutive very “volatile” summer. The good news for economists whose GDP predictions will be dead wrong once more, is that they will have yet another aspect of that thing called “reality” to blame it on.