– Rabbi Dovid Weiss On Judaism, Israel And Zionism – ‘The More The Religious The (Jewish) Community Is, The More Anti-Zionist They Are’ – ‘Our Hearts Cry For The People Of Palestine’ (Video)

– MUST-SEE: If you want to show people the truth then get them to watch this short speech (Video) 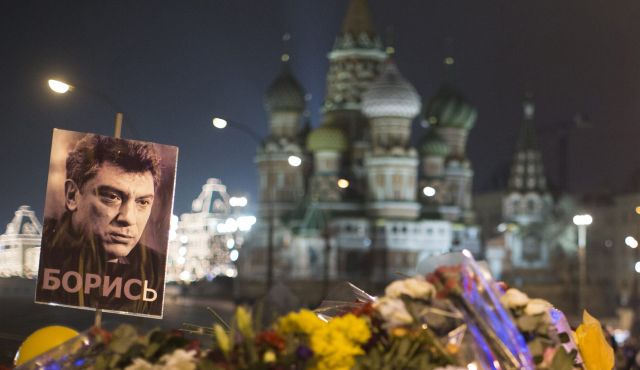 People pay their respects at the place where Boris Nemtsov, a Russian opposition leader, was gunned down, Moscow, March 2, 2015

Boris Nemtsov wasn’t murdered because he was Jewish; but his background has renewed the discussion of what it means to be Jewish in Russia today.

Let’s make something clear: Boris Nemtsov was not murdered because he was Jewish (or half Jewish). The prominent 55-year-old politician was most likely killed because of his vociferous, unwavering rejection of the war in Ukraine. He was gunned down near the Kremlin, in front of his Ukrainian girlfriend, just days before an anti-war rally in Moscow that he had partly organized. According to Ukraine’s president, Petro Poroshenko, Nemtsov had evidence of Russia’s role in the war, and was on the verge of revealing it.

But because the well-known opposition activist was born into a Jewish family (he later became a practicing Orthodox Christian), the grisly drive-by shooting has allowed for anti-Semitism to rear its familiar head, and for a renewed discussion of what it means to be Jewish in Russia today.

As a correspondent in Moscow for Reuters, I met Nemtsov on numerous occasions throughout the final years of the last decade. He was a journalist favorite: upbeat, cheery, and always had time to answer our questions. His smiling face, crowned by a set of black curls, was a fixture in the small crowd of opposition activists who came, dutifully, to the often tame and tiny rallies sanctioned by the government. Now those same people are mourning their friend’s premature death. In Moscow on Monday, tens of thousands rallied in Nemtsov’s honor. While his allies point the finger of blame at the Kremlin, President Vladimir Putin has pledged to find those responsible for the “vile and cynical murder.”

When looking at members of the “fifth column,” those seen by the Kremlin as traitors, one is struck by the disproportionate representation of Jews. As the chief rabbi of Moscow, Pinchas Goldschmidt, pointed out to me: Nemtsov was killed a 20-minute walk from the Israeli embassy, which he fears will carry symbolism in time to come.

Putin first used the term “fifth column” in an exultant parliament address one year ago. It has since effortlessly slipped into the mainstream Russian language. An enormous poster depicting five such state enemies, including Nemtsov and the anti-corruption campaigner Alexei Navalny (who is under house arrest), appeared hanging from the roof of a popular Moscow bookshop in April. Photographs of the same crew, plus others including defiant radio journalist Alexei Venediktov and punk rockers Pussy Riot, have hung outside an airport in Crimea, and others still, such as opposition publisher Sergey Parkhomenko, have made their way onto a well-designed website condemning eighteen people for not loving their country. Since Putin denounced, albeit without naming names, the “fifth column” last March, a plethora of blogs and forums have sprung up in the Russian language, calling various opposition activists, including Nemtsov, “yids.”

Putin: Not an anti-Semite

Despite all of this, I still do not believe that Putin, or for that matter, the open rhetoric of the Kremlin, is particularly anti-Semitic (the last decade has seen the government-sponsored construction of synagogues; Putin and Jewish billionaire Viktor Vekselberg personally contributed their money to the building three years ago of Moscow’s enormous Jewish Museum and Tolerance Center). I do believe, however, that anti-Semitism can be a convenient tool for those who sit between the Kremlin’s defensive red brick walls. Indeed, Russia’s all-powerful Investigative Committee has made the preposterous suggestion that among its various lines of inquiry, it is considering whether Islamist extremists are behind Nemtsov’s murder.

We’ve seen this before. Two years ago, when responding to criticism from German Chancellor Angela Merkel that Pussy Riot’s prison sentence was too harsh, Putin replied that one of its members was an anti-Semite. Early last year, as pro-Russian rebels violently swept to power across parts of eastern Ukraine, leaflets were distributed in the city of Donetsk, ordering Jewish residents to register with the new authorities. While major Jewish organizations in the United States were swift to condemn this as barbaric anti-Semitism, local Jews viewed it differently, arguing that historic fears were being drummed up to paint ethnic Ukrainians as fascists. When I met members of the community a few months later, no one complained of anti-Semitism. Instead, their hearts ached over friends killed by mortar fire, and the flattening of apartment blocks that were once their homes.

This is not to say that being Jewish in Russia is easy. A mass exodus of Jews from the former Soviet Union – around 2 million – began in the 1970s, with most leaving for the United States and Israel. Those who remained in Russia (some estimate up to 500,000) enjoyed a religious and cultural revival that sprang into action after the collapse of Communism.

For those in the public eye, as we saw with Nemtsov, being Jewish can carry a curse. It can lead to easy labeling and life under the convenient shadow of blanket anti-Semitism. Nemtsov’s bullet-punctured body lay dead on the crossroads, with the Kremlin and the onion domes of St. Basil’s Cathedral in one direction; the embassy of Israel in the other. “This is symbolic of what Russian Jewry has faced and continues to face,” Goldschmidt told me. “Go with the Russians and convert to Christianity, the religion of the state, or stay with the Jewish people.”

So Israel calls this self-defense:

(Click on images to enlarge. Can’t show this often enough.) 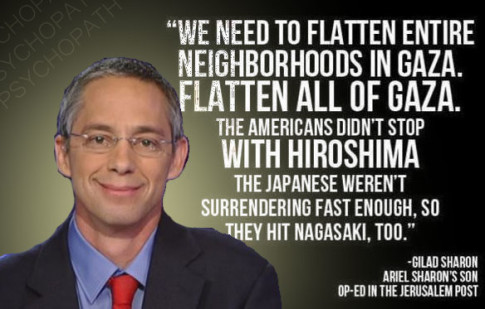