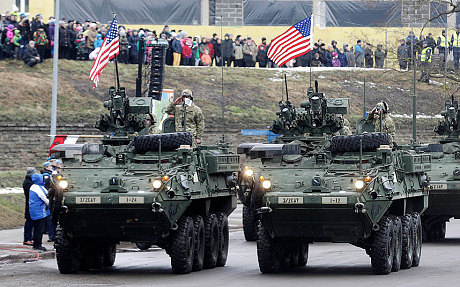 U.S. soldiers near border crossing with Russia in Narva (Reuters)

American armoured vehicles and British soldiers parade through Estonian border city of Narva, as tensions between Russia and the West continue to escalate

US army vehicles and British soldiers paraded through the streets of an Estonian city just 300 yards from the Russian border yesterday, in a display of Western unity against the encroaching threat from Moscow.

Armoured vehicles from the US Army’s Second Cavalry Regiment and British troops were officially taking part in a military parade marking Estonia’s Independence Day, but the choice of location was deeply symbolic.

The city of Narva sits in the easternmost part of Estonia, where the country’s border juts out into Russia, and has been cited as a potential target for the Kremlin if it should turn its attention from Ukraine to the Baltic states.

A majority of the city’s 60,000 residents are ethnically Russian.