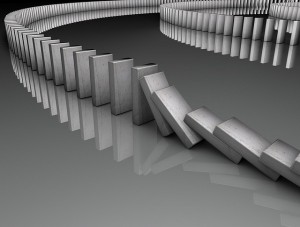 Do you want to know if the stock market is going to crash next year?  Just keep an eye on junk bonds.  Prior to the horrific collapse of stocks in 2008, high yield debt collapsed first.  And as you will see below, high yield debt is starting to crash again.  The primary reason for this is the price of oil.  The energy sector accounts for approximately 15 to 20 percent of the entire junk bond market, and those energy bonds are taking a tremendous beating right now.  This panic in energy bonds is infecting the broader high yield debt market, and investors have been pulling money out at a frightening pace.  And as I have written about previously, almost every single time junk bonds decline substantially, stocks end up following suit.  So don’t be fooled by the fact that some comforting words from Janet Yellen caused stock prices to jump over the past couple of days.  If you really want to know where the stock market is heading in 2015, keep a close eye on the market for high yield debt.

If you are not familiar with junk bonds, the concept is actually very simple.  Corporations that do not have high credit ratings typically have to pay higher interest rates to borrow money.  The following is how USA Today describes these bonds…

But in recent years, interest rates on junk bonds have gone down to ridiculously low levels.  This is another bubble that was created by Federal Reserve policies, and it is a colossal disaster waiting to happen.  And unfortunately, there are already signs that this bubble is now beginning to burst…

The reason why so many analysts are becoming extremely concerned about this shift in junk bonds is because we also saw this happen just before the great stock market crash of 2008.  In the chart below, you can see how yields on junk bonds started to absolutely skyrocket in September of that year… 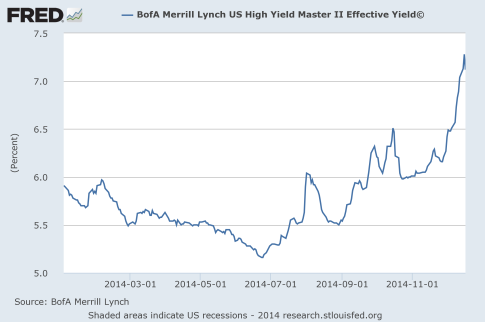 Of course we have not seen a move of that magnitude quite yet this year, but without a doubt yields have been spiking.  The next chart that I want to share is of this year.  As you can see, the movement over the past month or so has been quite substantial… 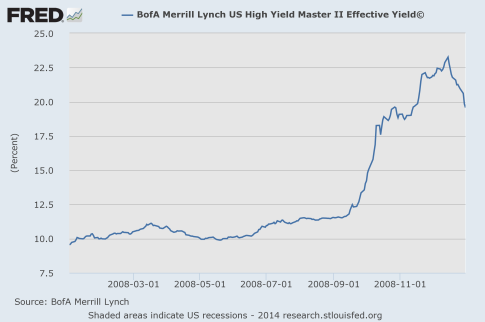 And of course I am far from the only one that is watching this.  In fact, there are some sharks on Wall Street that plan to make an absolute boatload of cash as high yield bonds crash.

When Josh Birnbaum was at Goldman Sachs in 2007, he made a huge bet against subprime mortgages.

Now he’s betting against something else: high-yield bonds.

From The Wall Street Journal:

Joshua Birnbaum, the ex-Goldman Sachs Group Inc. trader who made bets against subprime mortgages during the financial crisis, now has more than $2 billion in wagers against high-yield bonds at his Tilden Park Capital Management LP hedge-fund firm, according to investor documents.

Could you imagine betting 2 billion dollars on anything?

If he is right, he is going to make an incredible amount of money.

And I have a feeling that he will be.  As a recent New American article detailed, there is already panic in the air…

It’s a mania, said Tim Gramatovich of Peritus Asset Management who oversees a bond portfolio of $800 million: “Anything that becomes a mania — ends badly. And this is a mania.”

Bill Gross, who used to run PIMCO’s gigantic bond portfolio and now advises the Janus Capital Group, explained that “there’s very little liquidity” in junk bonds. This is the language a bond fund manager uses to tell people that no one is buying, everyone is selling. Gross added: “Everyone is trying to squeeze through a very small door.”

Bonds issued by individual energy developers have gotten hammered. For instance, Energy XXI, an oil and gas producer, issued more than $2 billion in bonds just in the last four years and, up until a couple of weeks ago, they were selling at 100 cents on the dollar. On Friday buyers were offering just 64 cents. Midstates Petroleum’s $700 million in bonds — rated “junk” by both Moody’s and Standard and Poor’s — are selling at 54 cents on the dollar, if buyers can be found.

So is there anything that could stop junk bonds from crashing?

Yes, if the price of oil goes back up to 80 dollars or more a barrel that would go a long way to settling things back down.

Unfortunately, many analysts are convinced that the price of oil is going to head even lower instead…

“We’re continuing to search for a bottom, and might even see another significant drop before the year-end,” said Gene McGillian, an analyst at Tradition Energy in Stamford, Connecticut.

If the price of oil stays this low, junk bonds are going to keep crashing.

For additional reading on this, please see my previous article entitled “‘Near Perfect’ Indicator That Precedes Almost Every Stock Market Correction Is Flashing A Warning Signal“.

But just like in the years leading up to the crash of 2008, there are all kinds of naysayers proclaiming that a collapse will never happen.

Even though our financial problems and our underlying economic fundamentals have gotten much worse since the last crisis, they are absolutely convinced that things are somehow going to be different this time.

In the end, a lot of those skeptics are going to lose an enormous amount of money when the dominoes start falling.