Dear California readers: if you drank tapwater this morning (or at any point in the past few weeks/months), you may be in luck as you no longer need to buy oil to lubricate your engine: just use your blood, and think of the cost-savings. That’s the good news.

Also, the bad news, because as the California’s Department of Conservation’s Chief Deputy Director, Jason Marshall, told NBC Bay Area, California state officials allowed oil and gas companies to pump up to 3 billion gallons (call it 70 million barrels) of oil fracking-contaminated waste water into formerly clean aquifiers, aquifiers which at least on paper are supposed to be off-limits to that kind of activity, and are protected by the government’s EPA – an agency which, it appears, was richly compensated by the same oil and gas companies to look elsewhere.

And the scariest words of admission one can ever hear from a government apparatchik: “In multiple different places of the permitting process an error could have been made.”

Because nothing short of a full-blown disaster prompts the use of the dreaded passive voice. And what was unsaid is that the “biggest error that was made” is that someone caught California regulators screwing over the taxpayers just so a few oil majors could save their shareholders a few billion dollars in overhead fees.

And now that one government agency has been caught flaunting the rules, the other government agencies, and certainly private citizens and businesses, start screaming: after all some faith in the well-greased, pardon the pun, government apparatus has to remain:

“It’s inexcusable,” said Hollin Kretzmann, at the Center for Biological Diversity in San Francisco. “At (a) time when California is experiencing one of the worst droughts in history, we’re allowing oil companies to contaminate what could otherwise be very useful ground water resources for irrigation and for drinking. It’s possible these aquifers are now contaminated irreparably.”

The process, for those confused, explained by NBC:

In “fracking” or hydraulic fracturing operations, oil and gas companies use massive amounts of water to force the release of underground fossil fuels. The practice produces large amounts of waste water that must then be disposed of.

Marshall said that often times, oil and gas companies simply re-inject that waste water back deep underground where the oil extraction took place. But other times, Marshall said, the waste water is re-injected into aquifers closer to the surface. Those injections are supposed to go into aquifers that the EPA calls “exempt”—in other words, not clean enough for humans to drink or use.

But in the State’s letter to the EPA, officials admit that in at least nine waste water injection wells, the waste water was injected into “non-exempt” or clean aquifers containing high quality water.

For the EPA, “non-exempt” aquifers are underground bodies of water that are “containing high quality water” that can be used by humans to drink, water animals or irrigate crops.

If the waste water re-injection well “went into a non-exempt aquifer. It should not have been permitted,” said Marshall.

Yet it was, to the tune of 3 billion gallons. And nobody said a word about it until someone finally did a little research and found that people, especially those in power, lie.

And lie they did because the severity of the pollution is only now becoming clear:

In its reply letter to the EPA, California’s Water Resources Control Board said its “staff identified 108 water supply wells located within a one-mile radius of seven…injection wells” and that The Central Valley Water Board conducted sampling of “eight water supply wells in the vicinity of some of these… wells.”

“This is something that is going to slowly contaminate everything we know around here,” said fourth- generation Kern County almond grower Tom Frantz, who lives down the road from several of the injection wells in question.

According to state records, as many as 40 water supply wells, including domestic drinking wells, are located within one mile of a single well that’s been injecting into non-exempt aquifers.

That well is located in an area with several homes nearby, right in the middle of a citrus grove southeast of Bakersfield. 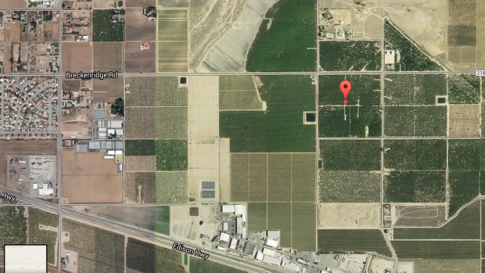 “It is a clear worry,” said Juan Flores, a Kern County community organizer for the Center on Race, Poverty and The Environment. “We’re in a drought. The worst drought we’ve seen in decades. Probably the worst in the history of agriculture in California.”

“No one from this community will drink from the water from out of their well,” said Flores. “The people are worried. They’re scared.”

It remains to be seen just whom that other, far more prominent community organizer will blame for this latest environmental debacle. Surely it will somehow be the fault of the Keystone pipeline?

In the meantime, the oil companies are already taking defensive measures, blaming the fiasco on… a “paperwork issue.”

The trade association that represents many of California’s oil and gas companies says the water-injection is a “paperwork issue.” In a statement issued to NBC Bay Area, Western States Petroleum Association spokesman Tupper Hull said “there has never been a bona vide claim or evidence presented that the paperwork confusion resulted in any contamination of drinking supplies near the disputed injection wells.”

Well, actually, there is:

However, state officials tested 8 water supply wells within a one-mile radius of some of those wells.

Four water samples came back with higher than allowable levels of nitrate, arsenic, and thallium.

Those same chemicals are used by the oil and gas industry in the hydraulic fracturing process and can be found in oil recovery waste-water.

And now back to the source of it all: the California Department of Conservation, where we are confident a little further investigative reporting will find millions in kickbacks and corruption, all funded by the oil and gas “lobby.”

When asked how this could happen in the first place, Marshall said that the long history of these wells makes it difficult to know exactly what the thinking was.

Kern County’s Water Board referred the Investigative Unit to the state for comment.

We hope to learn who the state will refer the unit for comment next.

Finally, for those living around the blue dots, avoiding the tapwater for the time being may be a good idea. 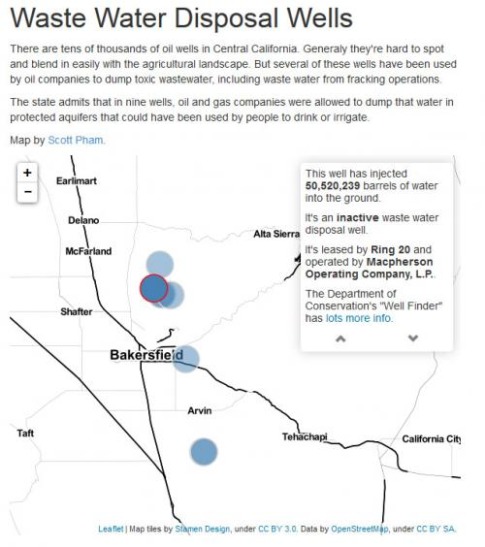 As for whether the public’s opinion about fracking is changed as a result of revelations such as this: we reserve judgment until comparative Investigative Units piece uncover how many billion gallons in fracking wastewater was dumped in other states where the shale miracle is (still) alive and well.