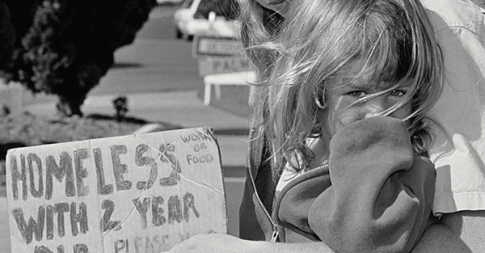 Something is dreadfully wrong with this picture.

In a report just released today by the National Center on Family Homelessness, a team of academics has demonstrated that the number of homeless children in the Land of the Free now stands at 2.5 million. 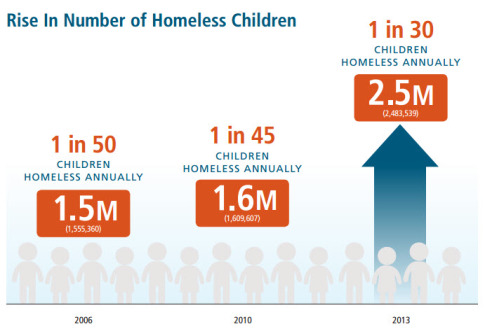 This is far and away an all-time high and constitutes roughly one out of every 30 children in America.

The report goes on to explain that among the major causes of this problem are the continuing impacts of the Great Recession that began in 2008.

Funny thing, someone ought to tell these homeless kids that the economy is doing great. Of course, we know this to be true because the stock market is near its all-time high.

The Dow Jones Industrial Average now stands at 17,633, just off its all-time high.

Also near its all-time highs is the bond market, and coincidentally, the US debt—which is now within spitting distance of $18 trillion.

In other words, if these kids ever do manage to pick themselves up off the streets, they’ll work their entire lives to pay off a debt that they never signed up for.

And it all comes down to a completely perverse, corrupt, debt-based paper money system.

Yes, no matter what happens in the world, there are always going to be rich and poor. And as painful as it may be, there will always be homeless children. That’s not really the point.

Today one’s station in life is much more tied to how you grew up. If you were born poor, you have a 70% chance of staying poor (according to a recent study from the Pew Charitable Trust).

And needless to say, if you’re born rich, you’re going to stay rich. Much of that is due to the monetary system.

In our system today, unelected central bankers wield total control of the money supply. In their sole discretion, they have conjured trillions of dollars out of thin air, and have thus greatly inflated the money supply.

This monetary inflation has created a number of effects.

On one hand there has been substantial asset price inflation. We’ve seen the prices of stocks, bonds, luxury properties, etc. hitting fresh highs again and again.

And, naturally, it’s people who are already very wealthy who own these assets.

Then there’s the other side– retail price inflation. Think ‘cost of living’. Rent. Food. Fuel. Medical costs. All the stuff that normal people need to live.

Both asset prices and retail prices have gone up.

Now, if you’re already very wealthy, you might spend as little as 1% of your annual income on living expenses, and you keep the other 99% to invest in these assets that keep hitting fresh highs.

In this case, retail price inflation is irrelevant; central bankers are putting so much money in your pocket you don’t even notice the increase in retail prices.

Then there’s the case for everyone else. People who struggle to make ends meet and have to spend 99% of their income on living expenses. If they’re lucky they save 1% of their income.

Obviously to these folks, retail price inflation eats away at their living standards. And a substantial portion of them fall out of the system entirely and end up on the streets.

Again, this isn’t intended to rant against wealth. We tell our students each year at our entrepreneurship camps– wealth accumulated by producing valuable products and services, through hard work, great ideas, and risk-taking, is pure and noble.

This system puts money in the pockets of people who are already wealthy by sacrificing the purchasing power and savings of everyone else. The rich get richer, the middle class gets hollowed out, and pensioners get squeezed.

They have completely broken capitalism and replaced it with state-sponsored welfare for select corporations and special interests. Totally destroying upward mobility in the process.

This is a far cry from a society that’s supposed to espouse ‘freedom and justice for all.’

As a system, it’s a complete failure.

But the only reason why it continues to have such destructive power is because we allow it to have that power.

A hundred years ago when they legalized fractional reserve banking and created the Federal Reserve, people didn’t have the options that they have today.

Now, all of the tools and technologies exist for you to completely divorce yourself from this system. Or at a minimum, substantially reduce the power and influence that governments and central bankers have over your life.