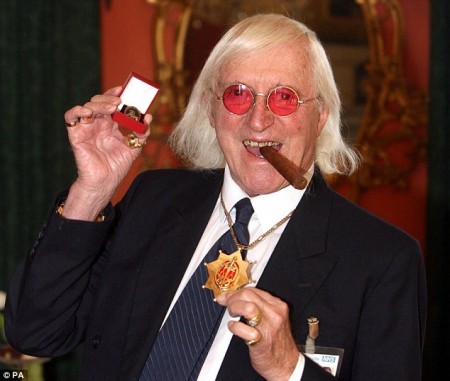 – Police admit they were told Jimmy Savile was a paedophile a DECADE before he was exposed (Daily Mail, Oct 5, 2014):

A police force has admitted they were told Jimmy Savile was a paedophile nearly a decade before his horrific crimes came to light, The Mail on Sunday can reveal.

Surrey Police have disclosed that a journalist called them in 2003 with information that an unnamed victim had been abused by Savile as a child in London – but the force did nothing with the information.

The call only emerged after an examination of police phone records in November last year, long after Savile was unmasked as the UK’s most notorious paedophile.

Surrey have now asked an external force to investigate whether there were any other missed opportunities which may have resulted from earlier investigations.

The 2003 call came in the middle of Operation Arundel, an investigation which led to former pop mogul Jonathan King and DJ Chris Denning being convicted of child abuse.
Records show that police operators asked the journalist to encourage the victim to contact them or the Metropolitan Police.

But Surrey said no crime record was created as ‘no direct allegation was ever received’ and Savile was not a suspect in the Arundel inquiry.

The new revelation is hugely embarrassing for the force, who previously admitted they identified Savile as a potential abuser in 2007, but botched the subsequent investigation.
avile was interviewed under caution by Surrey officers that year about sexual assault allegations dating back to the 1970s.

But no charges were brought after the Crown Prosecution Service advised there was insufficient evidence.

It has since emerged that Surrey officers overlooked key evidence during the investigation, codenamed Operation Ornament, from 2007 to 2009.

It was only during a 2012 review that the force discovered the 2003 call, but when the force then published a report on the review last January, it failed to mention it.

The omission was spotted in November 2013 and led to the force referring the matter to the Independent Police Complaints Commission, which oversaw the investigation but cleared Surrey of any wrongdoing.

The Mail on Sunday understands the blunder led Surrey to commission an independent report by Merseyside Police, which is currently being assessed.

But last night Labour MP Simon Danczuk said: ‘This is yet another revelation showing the casual attitude of police towards this crime at the time.

It’s important we know why information relating to credible tip-offs was not acted on so we can establish what the police knew about Savile. Only then will we be able to learn lessons so that other powerful abusers cannot slip through the net.’

A Surrey Police spokesman said: ‘The call from the journalist came during the force’s investigation into historical sexual offences known as Operation Arundel. Savile was not a suspect in this investigation.

‘Material relating to Operation Arundel has been shared with Operation Yewtree as part of their on-going enquiries. Surrey Police commissioned an independent external review of Operation Arundel by Merseyside Police and are in the process of assessing a report from that.’