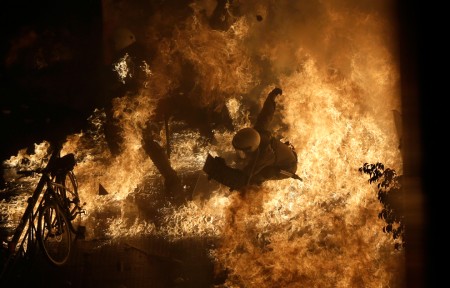 Remember Greece: the country that in 2010 launched Europe’s sovereign solvency crisis and the ECB’s own helpless attempts at intervention, which later was “saved”, only to default shortly thereafter (but without triggering CDS as that would end the Eurozone’s amusing monetary experiment and collapse the Deutsche Bank $100 trillion house of derivative cards), which later was again “saved” when every single global central bank made sure Greek bonds became the only yield-generating securities in the world? Well, the country which at last count was doing ok, is about to not be ok. Because according to none other than S&P, at some point over the next 15 months, Greek debt is about to be in default when the country is no longer able to cover its financing needs. In other words, back to square one.

How is that possible? Isn’t Europe so fixed, it no longer has anything to worry about except deflation, pardon, inflation?

Guesst not. According to Bloomberg, S&P estimates Greek financing needs for the next 15 months to be at EU43 billion.

This is a problem because even if Greece sells bonds this year and next, sales won’t be enough to cover net financing needs. So maybe Greece will sell more bonds? Well, the problem with that is that the second the LIFO paradigm of bond investing no longer works, and the last guy in may be stuck holding the bag, nobody will want to buy 1 penny in debt issued by Greece.

The specifics: S&P estimates Greece will draw EU5 billion from intl bond sales, EU20 billion from internal mkt, EU12 billion from official lenders inluding the IMF in next 15 mos. S&P also forecasts Greece will repay EU3 billion in bonds held by investors who refused to participate in 2012 debt writedown, and if it doesn’t then Greece will following Argentina in being held in “contempt to court” fo cramming down foreign law covenants. Just kidding: that would mean the global legal system actually works instead of serves merely to make the rich richer.

As for Greece, it appears that suddenly the idyllic image of its recovery is about to be torn to shreds and the Syntagma riotcam will have to come out of hibernation.

Or maybe it won’t. In a case of populist pandering that Obama himself would be proud, at the same time as the S&P report hit, the Greek premier Antonis Samaras said in a Kathimerini op-ed that if political stability isn’t threatened, Greece won’t need emergency loans in few months, and will achieve final settlement on public debt. He added that liquidity in Greece will be restored after ECB stress tests on country’s lenders and that in stark contrast to what S&P just said, Greece doesn’t need new bailout agreement, no new loans.

Actually, it will. The backdoor left open by Samaras is that “achievements will be endangered in case of political instability, and if parliament has to elect president” adding tbat the “government will not allow those who want country to commit suicide to have it their way.”

In other words, Greece will default the second the people start protesting the crushing, and very simple math, and they decide they have had enough of the technocrat and appoint another president. Because, you see, it is not that Greece implemented zero reform, and rooted out the pervasive cooruption that saw billions in foreign “aid” end up in offshore bank accounts of the political oligarchy, or the simple math of sources and uses of funds: it is the danger of the Greek people returning to what they did best in those days of 2010 and 2011 when every other day saw a riot in the center of Athens, that will be the straw that finally breaks the camel’s back.

And thus we go back to square one, as we always said we would, when only timing was a matter of debate. Well, we now know the timing: T minus 15 months and counting to yet another Eurozone collapse.

5 thoughts on “Here We Go Again: Greece Will Be In Default Within 15 Months, S&P Warns”