In what appears to be an awkward moment of uncomfortable fact, ABC reports satellite imagery reveals an area of about 20 million square kilometres covered by sea ice around the Antarctic continent – the highest level of coverage since records began. This is the 3rd year in a row that the sea ice coverage has reached a record level – increasing at 1.5% each decade since 1979. However, there is another side to this, as the area covered in sea ice expands scientists have said the ice on the continent of Antarctica which is not over the ocean continues to deplete. The climate is changing, one way or the other. 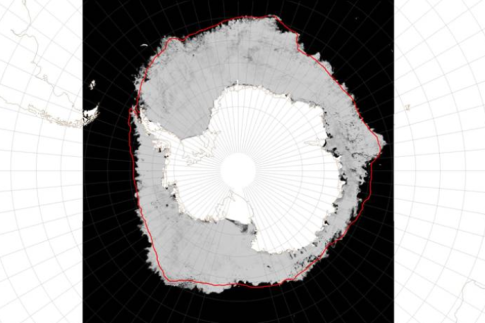 Scientists say the extent of Antarctic sea ice cover is at its highest level since records began.

Satellite imagery reveals an area of about 20 million square kilometres covered by sea ice around the Antarctic continent.

Jan Lieser from the Antarctic Climate and Ecosystems Cooperative Research Centre (CRC) said the discovery was made two days ago.

“This is an area covered by sea ice which we’ve never seen from space before,” he said.

“Thirty-five years ago the first satellites went up which were reliably telling us what area, two dimensional area, of sea ice was covered and we’ve never seen that before, that much area.

“That is roughly double the size of the Antarctic continent and about three times the size of Australia.”

As the area covered in sea ice expands scientists have said the ice on the continent of Antarctica which is not over the ocean continues to deplete.

“The extent of sea ice is driven by the winds around Antarctica, and we believe that they’re increasing in strength and part of that is around the depletion of ozone,” he said.

He said changes to sea ice levels could have implications for the entire Antarctic ecosystem.

Continental ice continues to deplete, because of volcanic activity.

– Scientists Stranded As Antarctic Temperatures Plunge To Lowest Ever Recorded

– Antarctica Sets Yet Another Sea-Ice Record

… especially if we also consider what happens in the Arctic:

Good news from the Arctic: has startled the giant ozone hole, the researchers in the past year, has disappeared. Human conduct, however, was not in the game – the weather is responsible for the healing of the shield.