There are plenty of things to worry about these days. A cursory look through today’s (13 Sep 14) drudgereport.com sets the tone: the Pope says WWIII is underway; a senior Democrat accuses the Republicans of endangering civilization; drones are invading the privacy of citizens; militias are blocking traffic in the Mexican border; Feds run a US$589 billion budget deficit; the UK might fall apart; the Ebola epidemic is getting serious in Africa; a mystery virus spreads to NY and CT (and we could not resist adding this one: Hillary Clinton is doing yoga).

With all of this in our minds it is easy to forget, or at least put in proper context, the extraordinary progress that mankind has achieved over the centuries against remarkable odds. World population has steadily increased, proving Malthus wrong. Serious diseases like polio and smallpox, which affected even monarchs and presidents over the centuries, have been eradicated. We can crisscross the planet in less than 24 hours and put satellites in deep space. The baby boomers and their offspring are the most prosperous generations the world has ever seen.

This shows that with enough intelligence, political will, common sense and perseverance most challenges we face as a species can be overcome. This should provide a decent amount of hope that we can tackle whatever we are facing right now.

Well, what will happen if we start losing those qualities and values as a global society? Which is why we believe that the following graphs are the scariest in the world today: 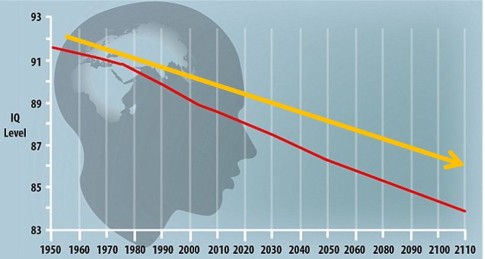 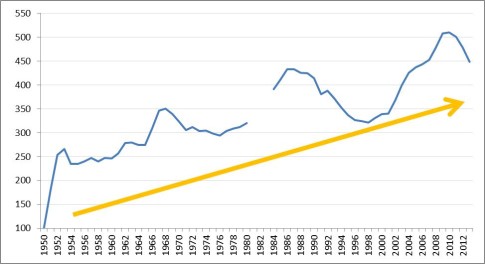 (a) Based on NATO expenditures (in 2011 constant US$), the longest data series publicly available.

The average world citizen is getting dumber while our means of doing harm are increasing. This trend is clearly not our friend.

Countries around the world today spend over US$1.7 trillion on weaponry – more than the total global investment in energy supply. Beyond the manufacturers and suppliers downstream, this produces zero economic benefits (weapons become obsolete very quickly and do not generate any returns; on the contrary as, well, they blow stuff up) and the associated costs add to already bloated government debt levels. And that’s US$1.7 trillion less available each year to improve world education, food and fuel availability, the environment and shifting global demographics, all critical issues of the 21st century.

Also concerning is the fact that control over these weapons can be quickly lost, creating the prospect of blowbacks, never ending conflicts and major tragedies.

Prior to 1991, the Soviet Union had more than 27,000 nuclear warheads and plenty of weapons-grade uranium and plutonium to triple that number. While there have been no confirmed reports of missing or stolen former-Soviet nuclear weapons (astonishing given all the political and economic turmoil since then), there is ample evidence of a significant black market in nuclear materials. How long before someone in that rapidly expanding pool of idiots gets a hold of some is anybody’s guess.

Note: accidents can happen as well, adding to the unease of handling this type of firepower. For instance, in 1961, a B-52 carrying two nuclear bombs broke up in mid-air, dropping its nuclear payload very close to Goldsboro in North Carolina. Five of the six fuses designed to prevent a detonation failed in one of the bombs, with only the last one averting a nuclear explosion. That was an unbelievable close call.

And now turmoil is spreading across the Middle East yet again. With all the conflict going on, anyone showing up and volunteering to fight for one of the sides will be given free food and weapons, courtesy of the associated regional and international powers. Will those weapons stay there, concerning as that might already be for local populations, or will they be used elsewhere, even if the conflict is contained or resolved? As we all know fundamentalists – probably the most idiotic of the bunch – are ready to do anything.

Humanity cannot risk its future falling into the hands of increasingly lethal buffoons. The stakes are just too high now. Hopefully our leaders are paying attention, but this should concern us all. Let’s try to be smart about it – while the smart is still going.

2 thoughts on “The Two Scariest Charts in the World”