First a drought, then a plague, now an earthquake: if these three aren’t enough to help boost California’s GDP, then it may be time for Krugman to resign. Oh and prepare for wine prices to become the latest participant in Janet Yellen’s inflationary “noise” parade. The reason – images such as this one showing what happens when a powerful quake hits just miles away from San Francisco’s wine area.

The red stuff is luckily not blood:

As Reuters reports, and as thousands felt early this morning, an earthquake of 6.0 magnitude, the largest in the region for 25 years, shook the San Francisco Bay Area early on Sunday, waking residents and causing some power outages and minor damage, according to initial reports. NBC Bay Area reports that The Queen of the Valley Hospital in Napa has admitted 70 patients but their injuries are not expected to be serious. An office building in Napa was dechunked.A video from the quake in progress:

The U.S. Geological Survey (USGS) said the epicenter of the quake was eight km (five miles) northwest of the town of American Canyon, on the northern edge of the Bay, hitting some 9 kilometers away from the city of Napa at a depth of 10.8 kilometers. Latest shake map below. 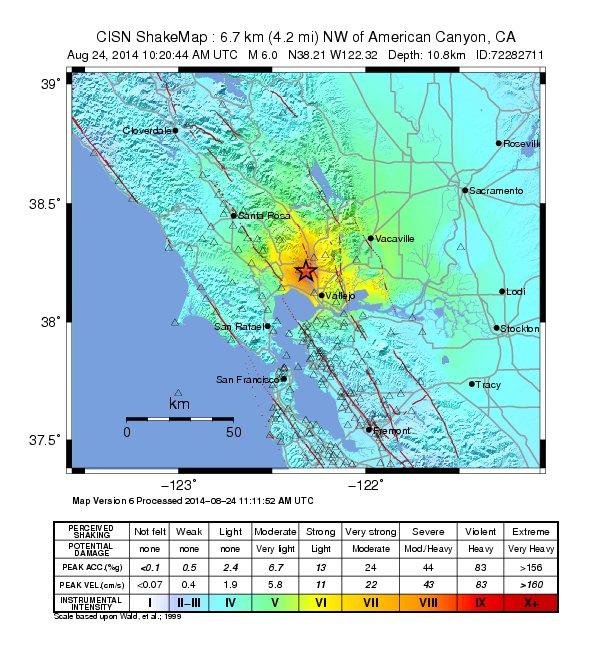 Randy Baldwin, a USGS geophysicist, said the tremor was potentially damaging because it was close to populated areas. He added the USGS was starting to receive reports of some damage in the city of Napa, mostly masonry and some structural damage, as well as power outages.

Local CBS news said that several fires had broken out in Napa, which is famous as a wine-growing center. A safety dispatcher for several cities, including American Canyon and Napa, said there were reports of people losing power. The latest PG&A outage map is shown below: 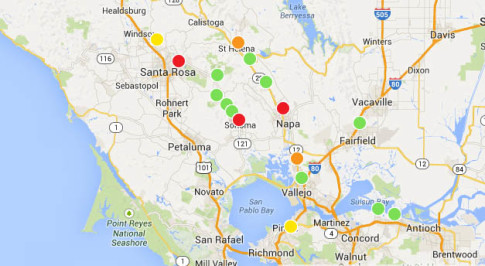 Police dispatchers in nearby San Francisco and Oakland said there were no reports of major damage.

“Oh I felt it. When I woke up I was lying on the floor. It kicked me out of bed,” said Keith, a man who lives in Napa and who wanted to be identified only by his first name. He said he went right into his job at the front desk of a Napa hotel, leaving his house in disorder. “The house is a mess, everything is out of the cabinets in the kitchen. Dressers tipped over.”

The quake was the largest to hit the Bay area since the Loma Prieto quake in 1989. “It is the strongest quake in a 60-mile (100-km) radius from the epicenter of this quake in several decades,” Baldwin said.

Reuters reporters in Oakland felt the quake as a long, low swell that shook gently for several seconds. “It was a shallow quake and there are lots of aftershocks,” Baldwin said, adding most were around magnitude 2 range.

The question now is whether the aftershocks, which can continue for the next several weeks and which experts will watch their distribution to determine if this quake happened on a fault line, will morph into something even stronger.

Meanwhile, here is some documentary evidence of the aftermath:

Finally, here is a live feed of the event from NBC: