Day after day, headlines from Argentina implore Judge Griesa to do the “fair, responsible” thing and lift his judgment that holdouts get paid before current bondholders receive their payments… and day after day Argentina’s demands are met with silence or denials. Today, though, with 1 week left until Argentina must put up or shut up, Judge Griesa has come out swinging…

While CDS spreads have surged once again, bonds trade with default probabilities around only 50% which, according to Jefferies “are expensive on underestimating the risk of default.” 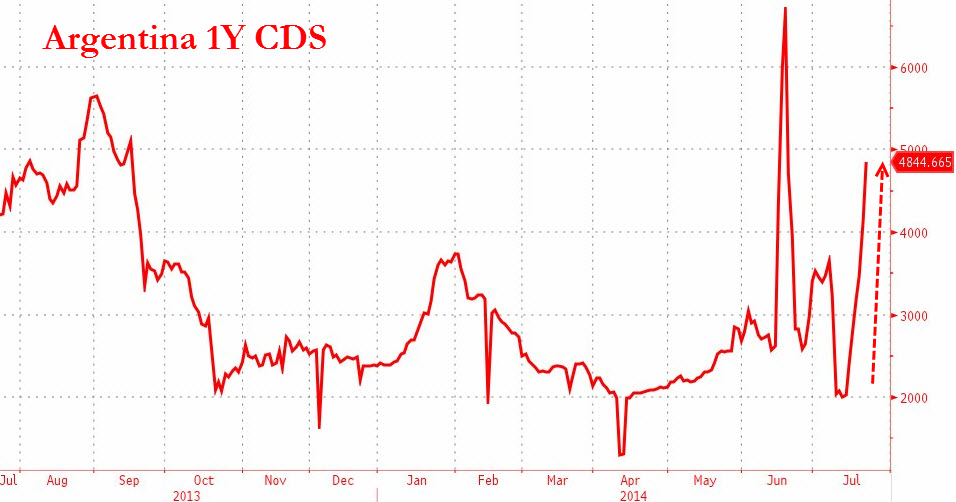 U.S. District Judge Thomas Griesa declined to rule immediately on calls by holders of defaulted Argentina bonds to bar payment on some dollar- and yen-denominated debt in a hearing in Manhattan federal court.

Argentina had asked the judge to delay rulings that bar the country from making payments on its restructured debt before paying holders of defaulted bonds as it faces a possible second default this month.

The South American nation renewed its request for a delay so it can negotiate without risking liability for what it argues could be billions of dollars in new claims by holders of defaulted and restructured bonds. That request has yet to be addressed.

Today, Griesa began the proceedings by hearing arguments about whether his orders bar payments to holders of U.S. dollar-denominated exchange bonds issued under Argentine law and payable in that country, without a corresponding payment to holders of the defaulted bonds.

Judge Griesa is not happy…

Argentine bonds sold under New York law due 2033 “are expensive on underestimating the risk of default,” which is 50% and increasing, Siobhan Morden, the head of Latin America strategy at Jefferies Group, wrote in a report today

*  *  *
Argentina will enter into technical default on its restructured bonds on July 30 unless it reaches an agreement with the holdouts.

The clock is ticking… and Argentina is furious…

Three weeks after President Cristina Fernandez de Kirchner sent $539 million to pay bondholders, the money remains in limbo as a U.S. court considers what to do with the funds.

Fernandez said on July 16 the country can’t default because it sent the funds to the banks, and now it’s the responsibility of bondholders to demand payment from the judge and intermediary banks.

“Only countries that stop paying their debt fall into default,” Fernandez said at a conference in Brazil. “Argentina will keep paying its debt and meeting its obligations.”

We leave it to Judge Griesa to conclude…

“IN MY VIEW, EVERY SINGLE PROBLEM YOU’VE [ARGENTINA] DESCRIBED IS SUSCEPTIBLE TO BE HANDLED IN A SETTLEMENT…

IF WE DON’T, THERE WILL BE A DEFAULT, AND THAT IS THE WORST THING.“

Bond prices are falling after the judge’s latest ruling… 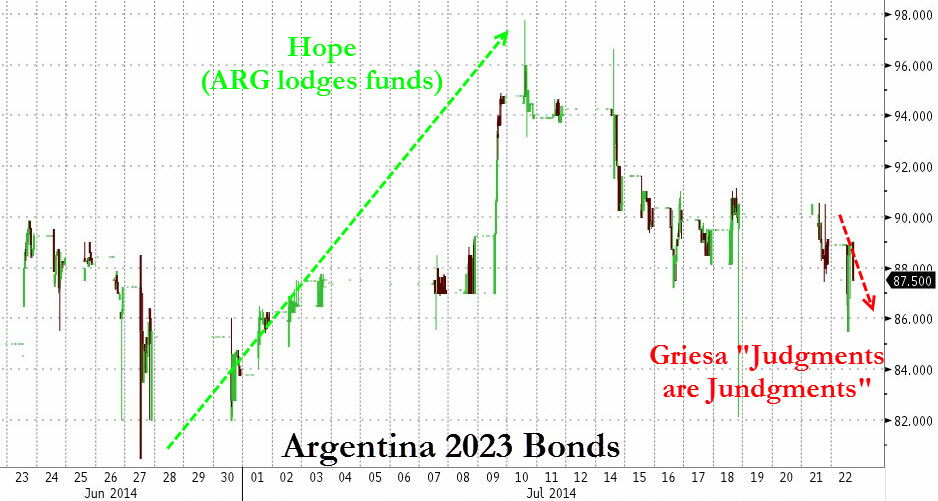