In my opinion gold in (extended or permanent) backwardation is signalling a total loss of confidence in the $US Dollar and is a clear sign that the dollar endgame is here.

The Great Depression will soon look like a walk in the park. 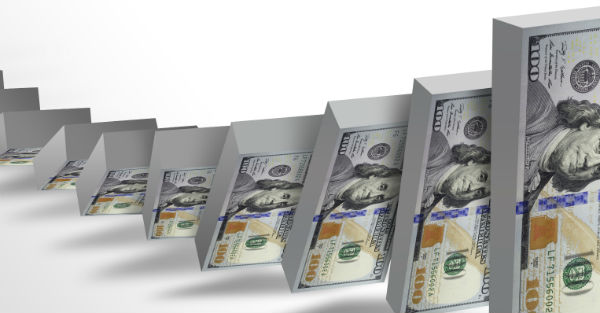 Exactly 70 years ago to the day, hundreds of delegates from 44 nations were busy at work in Bretton Woods, New Hampshire creating a brand new financial system.

World War II had just ended. Europe was in ruin.

And since the US was simultaneously the largest economy in the world, the primary victor in the war, and the only major power with its productive capacity intact, it was easy to dictate terms: the dollar would dominate the new system.

Every nation would hold dollars as the primary reserve currency, and the dollar would be redeemable for gold at $35/ounce.

Also, global commerce would be conducted and settled in dollars, and these settlements would clear through the US banking system.

Naturally this created substantial demand from foreign governments who needed to begin accumulating dollars for trade and reserves.

So through a variety of programs, from the Marshall Plan to the IMF and World Bank, the US began flooding the world with dollars.

Initially everything went according to plan.

But soon the US government realized something important– foreign demand for the dollar was so strong that they could get away with printing more dollars than they had gold.

This allowed them to run all sorts of deficits and spending initiatives– more war, more welfare, more waste… all with minimal accountability.

Initially the consequences were insignificant.

Sure, the price of gold in London was a few dollars higher than in the US (they called this the ‘gold window’).

But demand for the dollar was still strong. So why bother changing?

By 1971, the situation had gotten far worse. Another decade of war, excessive spending, trade deficits, and money printing had pushed many foreign nations to their breaking points.

Foreign nations’ dollar reserves far exceeded the US government’s gold holdings. And with confidence waning, many began redeeming their dollars for gold.

Only days later, Richard Nixon put a stop to this and unilaterally terminated the US dollar’s convertibility to gold.

Think about the magnitude of this decision: Nixon was effectively defaulting on US obligations to the rest of the world– a complete betrayal of their trust.

Yet despite this massive shock that reset the global financial system, the dollar somehow managed to remain the world’s #1 reserve currency.

You’d think they would have been grateful, thanking their lucky stars that the rest of the world gave them a second chance. But no.

Over the past 43 years, the US has continued to print, devalue, and mismanage the dollar.

Simply put, other nations are done. Fed up, really. And it’s not just words.

Consider that in a matter of months, the US will be overtaken by China as the world’s largest economy.

Not to mention, the total combined GDPs of China, India, Russia, and Brazil are roughly the same as the US and EU combined.

The renminbi already has experienced rapid growth as a dollar alternative for trade; in May, cross-border settlement surged 52% from the year prior.

Renminbi settlement banks are being set up from London to Canada, and the central banks of both France and Luxembourg have signed agreements for renminbi clearing.

There have already been numerous Western companies (like McDonalds) that have issued renminbi-denominated bonds.

And even the provincial government of British Columbia issued a renminbi bond earlier this year. It was a whopping five times oversubscribed.

I’d expect within the next 2-3 years we’ll start seeing trade settlement in renminbi, even when none of the parties are in China.

Today, for example, a transaction between a Paraguayan merchant and a company in Angola will likely settle in US dollars.

Soon, I think we’ll start seeing that transaction done in renminbi. And once that happens, you’ll know it’s game over for the dollar.

Shortly after, national governments in western countries will issue renminbi bonds (perhaps Greece or Portugal will be first). And eventually, even the US government itself.

Today, 70 years after Bretton Woods, leaders from China, Russia, India, Brazil, South Africa, and several other nations are hard at work in Fortaleza, Brazil creating a new development bank that will compete against the US-controlled World Bank.

This is a major step in an obvious trend towards a new financial system. Every shred of objective data is SCREAMING for this to happen.

It’s a different world. Everyone realizes it except for the US government, which is still living in the past where they’re #1 and get to call all the shots.

The consequences of missing this boat are enormous, and it’s going to be a rude awakening for anyone not paying attention.