There was some trepidation yesterday when after the first day of Putin’s visit to China the two countries did not announce the completion of the long-awaited “holy grail” gas deal, and fears that it may get scuttled over price negotiations. It wasn’t: moments ago Russia’s Gazprom and China’s CNPC announced, that after a decade of negotiations, the two nations signed a 30 year gas contract amounting to around $400 billion. And with the west doing all it can to alienate Russia and to force it into China’s embrace, this is merely the beginning of what will be a far closer commercial (and political) relationship between China and Russia. 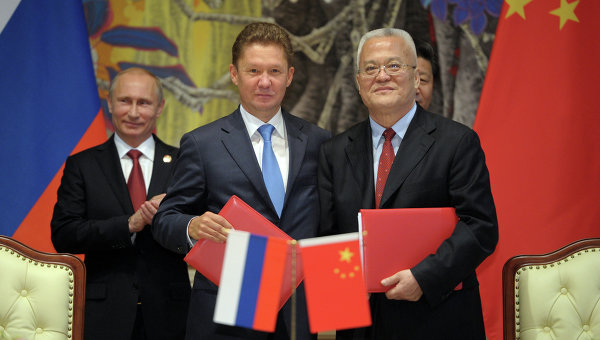 So far there have been no public pricing details on the deal which accrording to Gazprom CEO Aleksey Miller is a “commercial secret”, and which is believed to involve Russia supplying 38 billion cubic metres of gas per year to China via a new eastern pipeline linking the countries.

According to Itar-Tass, the compromise between Russian gas export monopoly Gazprom and Chinese National Petroleum Corporation (CNPC) on Russian gas price is estimated at $75 billion, citing the Deputy Head of the National Energy Security Fund Alexei Grivach. The differences on the price for 38 and 60 billion cubic meters supplies a year were $1.5 billion and $2.5 billion, he added, so the subject of the negotiations is quite a significant one.

According to Miller, only at 4 am local time it became clear “that all the principal issues have been solved.”

In March 2013, Gazprom and CNPC signed a memorandum of understanding on the planned gas supplies to China along the eastern route via the Power of Siberia pipeline. The signing of the contract has been delayed several times as the two sides failed to reach an agreement citing a pricing issue as the main stumbling block. President Putin’s current visit to China became the final stage of the negotiating process.

Then this from from RT:

A memorandum of understanding was signed in the presence of Russian President Vladimir Putin and President of China Xi Jinping on the second day of Putin’s two-day state visit to Shanghai. The price China will pay for Russian gas remains a “commercial secret” according to Gazprom CEO Aleksey Miller. Gas will be delivered to China’s via the eastern ‘Power of Siberia’ pipeline.

RT producers were informed of the landmark energy deal prior to its signing after a conversation with Miller.

Under the long-term deal, Gazprom will begin providing China’s growing economy with 38 billion cubic meters of natural gas per year for the next 30 years, beginning in 2018. The details of the deal were discussed for more than 10 years, with Moscow and Beijing negotiating over gas prices and the pipeline route, as well as possible Chinese stakes in Russian projects.

Just ahead of Putin’s visit to Shanghai, Russian Prime Minister Dmitry Medvedev gave reassurance that the agreed price would be fair.

“One side always wants to sell for a higher price, while the other wants to buy for a lower price,” Medvedev said. “I believe that in the long run, the price will be fair and totally comparable to the price of European supplies.”

A major breakthrough in negotiations came on Sunday as Gazprom chief Aleksey Miller sat down with his CNPC counterpart, Zhou Jiping, in Beijing to discuss final details, including price formulas.

Although Europe is still Russia’s largest energy market – buying more than 160 billion cubic meters of Russian natural gas in 2013 – Moscow will use every opportunity to diversify gas deliveries and boost its presence in Asian markets.

“I wouldn’t look for politics behind this, but I have no doubt that supplying energy to the Asia Pacific Region holds out a great promise in the future,” Medvedev said.

In October 2009, Gazprom and CNPC inked a framework agreement for the Altai project which envisions building a pipeline to supply natural gas from fields in Siberia via the western part of the Russia-China border.

In March 2013, Gazprom and CNPC signed a memorandum of understanding on Russian gas supplies to China along the so-called eastern ‘Power of Siberia’ route. When both pipelines are activated, Russia can supply Asia with 68 billion cubic meters of gas annually.

Regardless of what the final price ended up being, and whether or not China got the upper hand in the negotiations, the final outcome is there and it is real: as a result of his disastrous foreign policy in the past two months, Barack Obama finally pushed Russia into China’s hands, culminating with a deal that was ten years in the making and was never certain, until the Ukraine crisis.

And yes, this was all predictable from day one. Here is what we said precisely two months ago:

If it was the intent of the West to bring Russia and China together – one a natural resource (if “somewhat” corrupt) superpower and the other a fixed capital / labor output (if “somewhat” capital misallocating and credit bubbleicious) powerhouse – in the process marginalizing the dollar and encouraging Ruble and Renminbi bilateral trade, then things are surely “going according to plan.”

For now there have been no major developments as a result of the shift in the geopolitical axis that has seen global US influence, away from the Group of 7 (most insolvent nations) of course, decline precipitously in the aftermath of the bungled Syrian intervention attempt and the bloodless Russian annexation of Crimea, but that will soon change. Because while the west is focused on day to day developments in Ukraine, and how to halt Russian expansion through appeasement (hardly a winning tactic as events in the 1930s demonstrated), Russia is once again thinking 3 steps ahead… and quite a few steps east.

While Europe is furiously scrambling to find alternative sources of energy should Gazprom pull the plug on natgas exports to Germany and Europe (the imminent surge in Ukraine gas prices by 40% is probably the best indication of what the outcome would be), Russia is preparing the announcement of the “Holy Grail” energy deal with none other than China, a move which would send geopolitical shockwaves around the world and bind the two nations in a commodity-backed axis. One which, as some especially on these pages, have suggested would lay the groundwork for a new joint, commodity-backed reserve currency that bypasses the dollar, something which Russia implied moments ago when its finance minister Siluanov said that Russia may refrain from foreign borrowing this year. Translated: bypass western purchases of Russian debt, funded by Chinese purchases of US Treasurys, and go straight to the source.

Here is what will likely happen next, as explained by Reuters:

Igor Sechin gathered media in Tokyo the next day to warn Western governments that more sanctions over Moscow’s seizure of the Black Sea peninsula from Ukraine would be counter-productive.

The underlying message from the head of Russia’s biggest oil company, Rosneft, was clear: If Europe and the United States isolate Russia, Moscow will look East for new business, energy deals, military contracts and political alliances.

The Holy Grail for Moscow is a natural gas supply deal with China that is apparently now close after years of negotiations. If it can be signed when Putin visits China in May, he will be able to hold it up to show that global power has shifted eastwards and he does not need the West.

To summarize: while the biggest geopolitical tectonic shift since the cold war accelerates with the inevitable firming of the “Asian axis”, the west monetizes its debt, revels in the paper wealth created from an all time high manipulated stock market while at the same time trying to explain why 6.5% unemployment is really indicative of a weak economy, blames the weather for every disappointing economic data point, and every single person is transfixed with finding a missing airplane.

To conclude with the traditional geopolitical balance of power summary: Putin wins (again), Obama loses (again), and the monument to the dollar’s status as world’s reserve currency gets yet another tarnishing blow.