– Fukushima Is An Extinction Level Event: 17.91 Billion Lethal Doses (By Ingestion) Chasing Each And Every One Of Us On The Planet … And That’s Just From The Amount Of Cesium-137 (Veterans Today): 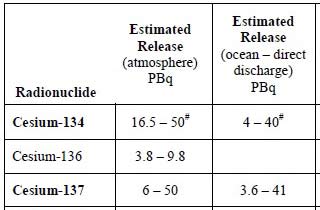 – Gov’t: Fukushima released up to 181 Quadrillion Bq of cesium, Chernobyl was 105 Quadrillion — Radioactive material to flow from Japan “for years to come” — Fukushima radionuclides have now spread “throughout N. Pacific” (ENENews, May 20, 2014):

According to the National Research Council — Committee on an Assessment of CDC Radiation Studies: “35 PBq of Cs-134 and 70 PBq of Cs-137″ were released during Chernobyl disaster.

4 thoughts on “Government: Fukushima released up to 181 Quadrillion Bq of cesium, Chernobyl was 105 Quadrillion – Radioactive material to flow from Japan ‘for years to come’”